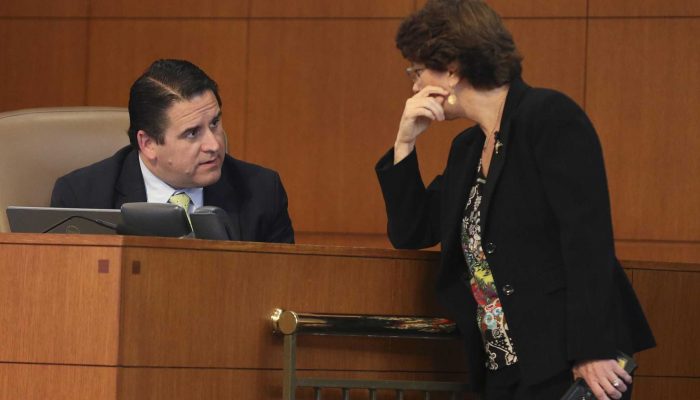 
Child care assistance for working parents, more emergency housing for the city’s homeless and a multi-government alliance to make sure the poorest students have internet access are ways San Antonio officials could use $270 million in federal stimulus dollars intended to help blunt the effects of the novel coronavirus.

District 7 Councilwoman Ana Sandoval even suggested the city could help pay for the area’s smallest employers to provide paid sick leave to their workers who may get COVID-19 symptoms.

Ideas flew at Wednesday’s brainstorming City Council session as officials try to bang out a plan for how to use the money.

City staffers laid out a wide-ranging blueprint for the funds — including assistance to needy families struggling to make mortgage and rent payments, retraining workers who lost their jobs during the pandemic and expanding internet access for those who don’t have it.

Several council members had their own ideas. Some have seized on the federal funds as a way to make sure many of the city’s shortcomings, particularly its pervasive poverty, aren’t as severe coming out of the crisis. Direct cash payments, free supplies and more loan programs were among the suggestions.

“We’re not trying to get back to the way things were,” Mayor Ron Nirenberg said during Wednesday’s council meeting.

On ExpressNews.com: As coronavirus recovery begins, questions and fault lines emerge about what post-COVID-19 San Antonio should look like

The outline presented by Assistant City Manager Colleen Bridger, though light on many specifics, calls for expanding existing programs, including its domestic violence prevention strategies, and starting new ones.

Of the $270 million given to the city out of the federal CARES Act, San Antonio already has spent about $75 million on immediate expenses related to the pandemic, including public safety and Metro Health.

The city could use the money to bolster existing rental assistance programs. The council already boosted the amount of dollars in San Antonio’s primary housing assistance program — dubbed the “risk mitigation fund” — to $25 million and expanded its purpose to cover costs of utilities, groceries, gas and internet access.

But at least half of that money already has been spent. District 9 Councilman John Courage called for putting another $25 million into the program, using the new stimulus dollars.

Another idea is to give area college students stipends to cover costs like housing and tuition. That way, “they can afford to live and and go to school at the same time,” Bridger said.

The city also is looking at pumping more dollars into workforce training programs. That money could be used to help those out of work find jobs and for employers to provide on-the-job training in high-demand fields.

District 10 Councilman Clayton Perry questioned how much demand the city would see for workforce training programs as restrictions on business activity continue to ease.

“The people that I’ve talked to that have lost their jobs, they’re not looking to retrain,” Perry said. “They don’t want to go out in to a different field. They want their jobs back where they used to work.”

Bridger pitched a “collaborative, citywide, multigovernment agency network … to expand fiber capability and student access” to the internet in a way to bridge the city’s “digital divide” and to make sure poorer students can complete their assignments online if schools still are shut down.

The city could give more direct cash payments to struggling families by expanding an existing program done in collaboration with the nonprofit Family Independence Initiative. It also could expand a loan program set up earlier this year that gives residents the amount of money they expect to receive in their annual tax refund, which they later have to repay, Bridger said.

For small businesses, the city is weighing grants to help businesses with no more than 20 workers get back on their feet, including rehiring employees laid off during the crisis.

The city also is looking into setting up “resource centers” and “hubs” for residents and businesses to access services like mortgage and rental assistance and asset building programs.

For those who fear they could catch the virus if they go out in public, the city is weighing a “FaceTime for government” so they still can tap those services, Bridger said.

On ExpressNews.com: Bexar County set to offer $450 stipend to those participating in retraining program

To some council members, the suggestions put forth Wednesday sounded like a lot.

“Each idea is excellent individually, but there are a lot of ideas,” Sandoval said. “I realize we do have a lot of money. But I’m having some problems seeing how we would accomplish all of it and how we can make real change with so many ideas happening at the same time.”

Others worried the city could create more bureaucracy in a time that calls for quick action.

“My concern is that we have a lot of areas that we’re setting up programs and processes for that’s going to chew up a lot of this available money instead of getting the money out to the businesses and people that really need it the most,” Perry said.

“I want to make sure that we’re putting the money where it’s most needed and not necessarily creating overhead expense,” Walsh said. “That’s the last thing that I think the federal government envisioned when they pushed this money down.”

Recovery from the economic havoc the virus wreaked on the city’s economy could require leaders to come up with new ideas, instead of relying on ones that haven’t worked in the past, District 8 Councilman Manny Peláez said.

“If we’re going to start solving old problems with the same solutions we’ve always been trying to solve them with, we might be disappointed with the results at the end of the day,” Peláez said.

City staffers will present a more detailed plan with dollar figures next week. The council is expected to vote on a final package at its June 4 meeting.