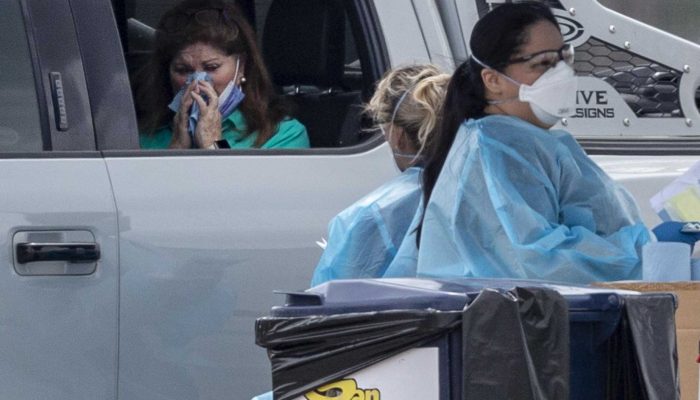 San Antonio officials are looking to expand the number of local COVID-19 testing sites as health officials confront a potentially grim new reality: the virus is here to stay.

Metro Health officials are in talks with Texas MedClinic to expand drive-thru testing being conducted at Freeman Coliseum to a second location on the city’s South Side. About 400 tests a day are done at Freeman.

The city is also in discussions with the Texas Military Department on opening up to three drive-thru testing sites. Those sites will be able to conduct about 200 tests a day, Emerick said.

“Just with those three big drive-thru sites, that’s a big boost for our community,” Emerick said.

And on Saturday, Walmart will open a drive-thru testing site at its store at 8923 W. Military Drive on the city’s West Side to test those showing COVID-19 symptoms, the company said.

Without widespread testing, it’s been tough for health officials to get a true picture of how the virus is taking shape in San Antonio.

“We want you to get tested,” Mayor Ron Nirenberg said during the daily joint city-county briefing. “Not getting tested makes it harder for us to assess where the infection is in our community.”

Between public and private medical providers, the city is getting about 1,250 tests a day, Emerick said. So far, more than 14,000 residents have been tested for COVID-19, data released Tuesday shows.

That’s not a complete picture of how many people here have been tested because Metro Health is still trying to obtain testing data from many private providers, Emerick said.

Metro Health officials haven’t settled on a target of how many tests needed to be conducted daily in order to get a true grasp of the disease’s proliferation here. Emerick noted that Texas officials have said they want to see 30,000 tests done a day.

She said Metro Health is trying to determine how many tests need to be done daily in Bexar County to get a better grasp on the scope of the disease.

Projections show the city could see the number of cases peak in mid-May, though Emerick said Metro Health has seen at least one model that shows cases peak in June.

Whether residents continue to stay at home will also help determine when the virus peaks, she said.