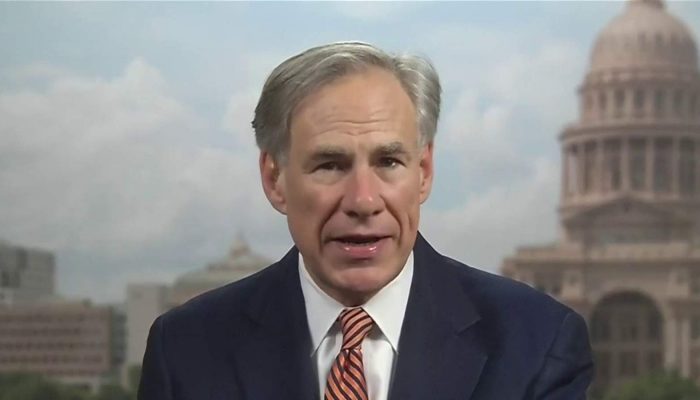 
SAN ANTONIO – Texas Governor Greg Abbott said Friday Bexar County may have already reached its peak in the number of new cases, but stressed that social distancing practices here and across the state must continue to reduce the spread of COVID-19.

“Bexar County is doing a good job of slowing the spread,” he said. “The studies I see show that actually Bexar County has reached the peak in the number of cases and you have a declining number of cases. So I think things are looking good.”

The forecasting models used by the city to determine the trajectory of the virus’ spread seems to back up Abbott’s observation. “It is quite possible that we have already peaked under current conditions in San Antonio,” according to said Dr. Juan Gutierrez, the chair of mathematics at UTSA who is working with the local health department.

As the city’s number of COVID-19 cases neared 1,200 Friday evening, Abbott took questions from KSAT 12 News anchors Deven Clarke and Isis Romero on the state’s response to the coronavirus pandemic and his plans on opening the state up on Friday evening.

Abbott said his team is working on new executive orders that are intended “to stoke the Texas economy as much as possible.” That announcement is expected next week.

“However, we must do it safely,” Abbott added.

The governor has assembled a team of doctors for guidance on the issue and thinks the states must open in “phases.”

Many businesses, gyms and restaurants were shut down in March throughout the state to prevent an explosion in COVID-19 cases. Abbott has hinted that those kinds of businesses will soon be able to reopen if they can follow better social distancing guidelines.

While Bexar County’s efforts to mitigate the virus’ spread have worked, Abbott said he knows more a spike in cases is possible as businesses begin to reopen.

“If there are hotspots, we will provide all the medical care needed to address it and reduce it,” Abbott said. “If it’s widespread, it could lead to retrenchment in the amount of business taking place.”

The state ranks near the bottom of all states in per capita testing, concerning some people who think it is too soon to open businesses.

“If Abbott’s mismanaged timeline wasn’t already too quick, now he’s threatening to put Texans at-risk even faster, while we still rank near the bottom in terms of testing and have yet to hit our peak in deaths,” said Abhi Rahman, spokesperson for the Texas Democratic Party, in a statement to KSAT. “We all want our businesses to succeed. However, for consumer confidence to rise, Texas must significantly increase testing now before opening businesses back up. The lack of testing will put more Texans at-risk to catching this virus and place our economy susceptible to a second wave.”

Abbott said he is aware that people who think the state is opening up too soon hold safety as their top priority.

“We have to balance that with the interest of others who say we’ve been homebound for too long. We have to get back to work to pay our bills,” Abbott said.

Mayor Ron Nirenberg previously expressed concerns about the plans to reopen the economy.

“Based on the health guidance, we know that opening up carelessly would cause even more pain than we’ve already seen,” Nirenberg said. “We want to reopen as soon as possible, but as soon as safely possible. We don’t want to back here again. A healthy economy starts with healthy people.”

As of Friday, more than 22,000 COVID-19 cases and nearly 600 related deaths have been reported throughout Texas.

About the Author: Fares Sabawi