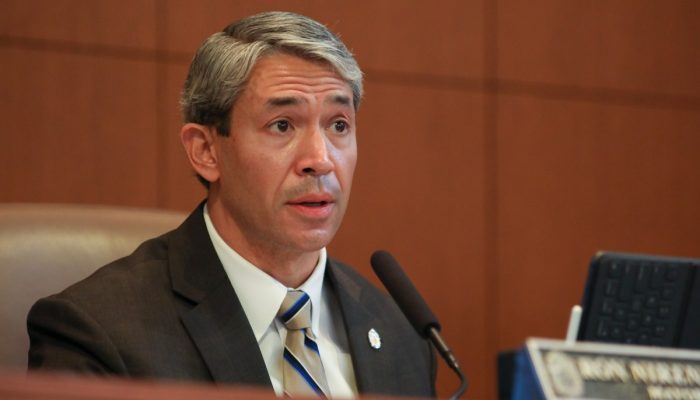 “Literally most of it is cut and paste from the governor’s order,” said City Attorney Andy Segovia. The order allows most businesses and activities to open at limited capacities on Friday.

Since residents now are allowed to get haircuts, tattoos, go to the movies, and even swim once pools are open, Council members Clayton Perry (D10) and John Courage (D9) suggested that it’s time for San Antonio to rename the “Stay Home, Work Safe” order to something that implies that more activity is allowed.

“We’re trying to get our businesses open – the governor’s trying to open Texas and we’re still hanging on to this stay-at-home order,” Perry said.

He suggested the City adopt a new title for the emergency order such as “Greater. SAfer. Together,” a slogan and pledge developed by the local Economic Transition Team that asks businesses to follow health and safety guidelines.

“People are still thinking that they can’t go outside at all,” Perry said. “People are confused. Stay-at-home order versus ‘Open Texas.’”

Courage suggested “Remain Home” or “Remain Safe” to use a term lighter than “stay.”

“Remain is a reminder, not an order,” he said.

The governor’s order says: “Every person in Texas shall, except where necessary to provide or obtain essential services or reopened services, minimize social gatherings and minimize in-person contact with people who are not in the same household,” Segovia noted.

That part was not changed with the governor’s order announced Monday, he said.

Nirenberg acknowledged that his colleagues made a “fair point” and will consider their recommendations. However, Councilwoman Ana Sandoval (D7) also made a “great point,” he said.

“I really believe the confusion is at the level of the State,” Sandoval said. “I would recommend asking the governor to clarify why he’s calling one thing ‘Open Texas’ and the order says ‘stay home’ unless you’re going out for these particular [services].”

Changing the name now likely would only confuse the message more and could lead to a second wave of infections, she said. “I think that would be counterproductive and not really in keeping with what public health emergency order is supposed to do.”

The local stay-at-home orders never restricted residents from leaving their homes as some shelter-in-place orders do, Nirenberg said.

“The point of all this remains the same: If we’re not engaged in an essential service [or] covered service declared by the governor, people need to stay at home,” he said. “This virus is still out there and we’re doing our part to contain it. … It’s less important what we call [the order], it’s more important what it says.”

The City orders differ from the State’s in that they require all public and private laboratories in the area to report COVID-19 testing data to the City’s health department. The City and Bexar County orders also advise residents to make sure that antibody tests they take are approved by the Food and Drug Administration.

Language requiring face coverings in public places where social distancing is difficult was removed from the latest local orders, which now say the wearing of face coverings is “strongly encouraged.” Residents cannot be fined for not wearing a mask, but private property and business owners can require people to do so.

With the City and County in alignment with the State in terms of orders, Nirenberg said there might be a point when stricter restrictions need to be reinstated. If there’s an uptick in positive cases or the hospital system becomes overwhelmed, those would ring alarm bells.

“While there is some level of disagreement in terms of the speed of the phases of opening the economy, one thing is clear this is a more thoughtful approach to opening the economy than we’ve seen in other places around the country,” Nirenberg said.

“We’re going to watch our data, and in the event it goes in the wrong direction, we’re going to have a very candid conversation with the governor,” he said. “We hope to remain in alignment [with the State], but our job is to make sure we protect our residents here at home.”

About the Author: Iris Dimmick