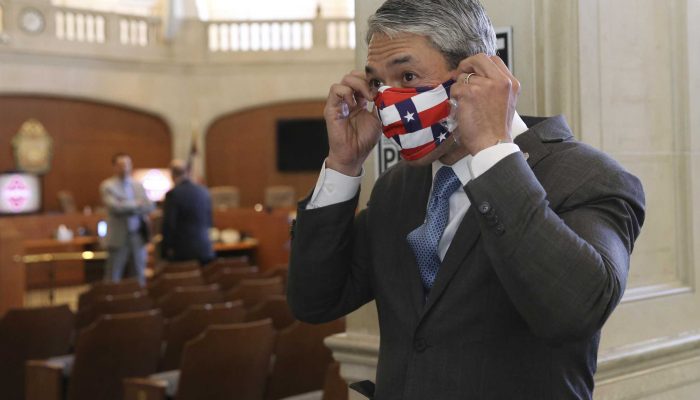 The new cases brought the total for Bexar County to 1,374 since the start of the pandemic.

The Express-News Editorial Board and reporters interviewed Mayor Ron Nirenberg about the state of San Antonio amid the COVID-19 pandemic.

De La Fuente, a 27-year veteran of the sheriff’s office, was home sick with a dry cough and other symptoms, Wolff said. His wife was planning to take him to an emergency room Thursday when his condition took a severe turn for the worse, Wolff said. He died at home, the county judge said.

“All of us are vulnerable, regardless of our age,” Wolff said at the daily city-county coronavirus briefing with Mayor Ron Nirenberg.

On ExpressNews.com: Gov. Abbott pushes Friday reopening even as Texas misses benchmarks set by his advisers

The new cases and deaths come as retailers, malls, restaurants and movie theaters prepare to reopen Friday under a new executive order issued this week by Texas Gov. Greg Abbott.

Under Abbott’s Open Texas initiative, restaurants, shops and other businesses can reopen at 25 percent of maximum occupancy.

Abbott’s order encourages residents to wear masks in public, but it bars cities and counties from fining those who refuse. The order supersedes local orders in San Antonio that authorized fines for those who did not wear masks in public in situations where maintaining a 6-foot distance from others would be difficult.

City Council voted 10-1 Thursday to extend Nirenberg’s latest stay-at-home order through May 19. That order requires people 10 years or older to wear masks or cloth face coverings when in a public place such as a grocery store or pharmacy. San Antonio no longer will be able to enforce the rule with fines or citations.

District 10 Councilman Clayton Perry, the lone member to vote against extending the order, said it still went too far.

“I still think that we’re overstepping the bounds on saying ‘It’s mandatory’ versus ‘You should wear it considering the health and safety of your neighbors,’” Perry said.

Businesses allowed to reopen under Abbott’s plan must provide face coverings to employees who work in close quarters with one another.

Under Abbott’s order, businesses such as bars, barber shops and salons will be able to go up to 50 percent capacity on May 18 if the state hasn’t seen a new rash of COVID-19 cases.

To date, 19 municipal employees — including police officers, firefighters and civilian workers — have contracted the disease, City Manager Erik Walsh told City Council members Thursday. Of those, eight have recovered and returned to work.

In Comal County, one more person has contracted COVID-19, bringing the total case count there to 55. Six Comal residents have died of the virus; 36 have recovered.