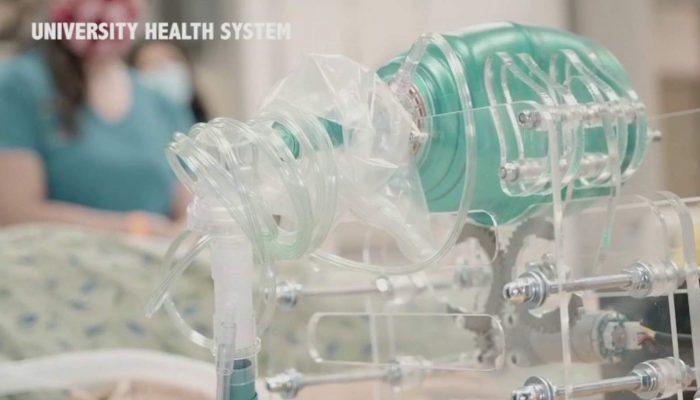 
SAN ANTONIO – Efforts by a San Antonio team to produce a basic portable ventilator for emergency use are nearing the final approval stages.

Skunkworks San Antonio is working with University Health Systems to test the adaptable emergency ventilator, or AEV, before it’s ready to be manufactured and used.

UHS Executive Director of Respiratory Therapy Michael Jones has been helping coordinate the testing with the use of HAL, a simulator mannequin.

“It could simulate a whole bunch of different things,” he explained. “It’s as close to being a human as you can get without being a human.”

HAL can be manipulated to have the symptoms found in COVID-19 patients and other illnesses, Jones explained.

The AEV worked well on the first round of testing. Jones suggested a few tweaks and more tests will be needed before it’s ready.

Dr. Erika Gonzalez, CEO and President of STAAMP Allergies, has been the medical consultant with Skunkworks SA. she said after more than a month, the device is nearly ready.

But the Food and Drug Administration still has to give emergency approval on the device before it can be used. The process traditionally takes years, but in an emergency, approval could take about a month, Gonzalez said.

After testing is done, the group will make 12 ventilators, but where they will be used is still not clear.

“The goal would be just to make sure we can get it out into the community to anybody who might need it,” Gonzalez said. “So whether that’s field medicine, EMT, you know, the fire department, the hospitals, just as a way for them to have something available to them should they need it.”

When power was lost during Hurricane Katrina, Jones said medical personnel had to use a handheld resuscitator known as Ambu bags on patients for hours to keep them alive.

The AEV can be battery charged and used in a similar situation. The simple ventilator will not replace the hospital grade ventilators, but it could help first responders.

Both he and Gonzalez see the AEV’S potential for use beyond the pandemic.

The team will return to UHS this week for round two of testing. Gonzales said groups around San Antonio have already expressed interest in the machine once its finalized.