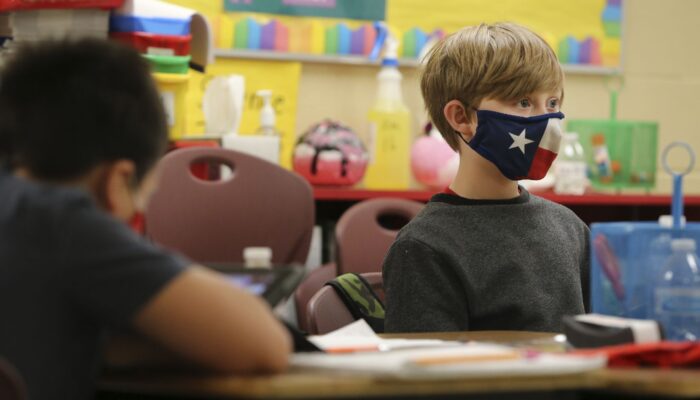 
North East Independent School District will relax some of its COVID-19 safety protocols, making masks optional for students during outdoor recess and physical education as long as they are socially distanced.

Trustees adopted the policy by a 6-1 vote Monday, a week after listening to input from parents, employees and community members regarding safety protocols. Commenters at that meeting were roughly split on the issue of mandatory mask use on campuses, but trustees said they were reluctant to make mask-wearing entirely optional with just weeks left in the school year.

In addition to lifting the mask requirement for outdoor activities, the board approved allowing visitors on campuses as long as rooms remain below 50 percent capacity and allowing parent meetings and conferences to be held in person. The district now will allow the sharing of classroom supplies as long as they are disinfected after each use.

The board also dropped a quarantine requirement for students and employees deemed a close contact to someone infected with the coronavirus as long as they are vaccinated and asymptomatic, and extended the district’s COVID leave policy for employees through April 30.

North East ISD School Board President Shannon Grona and Superintendent Sean Maika listen to comments at a meeting last June. On Monday, the board voted to relax some of the district’s coronavirus safety protocols, making masks optional for students in certain outdoor settings.

District 6 trustee Steve Hilliard cast the lone dissenting vote against the package of changes, although it appeared to be because they didn’t include making mask-wearing optional in classrooms.

“This, to me, is a big decision because we’re invading parent rights, in my opinion, and I’m very hesitant to tell other parents what to do with their kids,” Hilliard told his fellow trustees before the vote.

District 7 trustee and board vice president Sandy Winkley reminded the board that they had received hundreds of emails from community members, “the great majority” of which were in favor of keeping the mask requirement in classrooms.

The board of neighboring Comal ISD voted last month to make masks optional on campuses without seeking parent or employee input, sparking backlash among community members worried about a potential rise in infections and the possibility of having to pull in-person students out of classrooms made riskier for outbreaks.

And Boerne Independent School District officials blamed a relaxed attitude toward mask-wearing and hand-washing rules for an outbreak at an elementary school in suburban Fair Oaks Ranch two weeks ago that saw 19 convirirmed cases of the virus in two fifth-grade classes.

North East ISD trustees who voted to loosen the safety protocols framed the decision as a way to safely put the district on a path to normalcy. Several said they were hopeful that rising access to COVID-19 vaccines would soon reduce the community’s risk of disease.

“I feel that these … items here are small steps, but good steps, in working toward some sense of normalcy, but we have to take it one step at a time,” said District 2 trustee Terri Williams. “It’s little steps at a time that’s going to get us eventually where we need to be.”

About the Author: Andres Picon