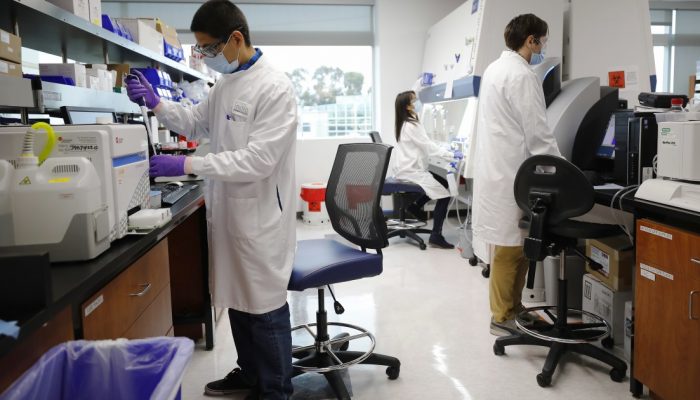 
From San Diego to Beijing to London and Moscow, scientists are working at breakneck speed to create a vaccine that will stop the spread of a virus that has killed nearly 400,000 people worldwide in the past six months.

There are few parallels in history to the war scientists are waging against the novel coronavirus, which is formally known as SARS-CoV-2.

Researchers quickly came up with reasonably good tests to identify who is infected. Many therapeutic drugs to make the disease less fatal are headed for clinical trials. One existing antiviral drug, remdesivir, shows promise for speeding up recovery times.

But life may not return completely to normal until there is a safe, effective vaccine.

There are at least 135 vaccines in development — a number that has has doubled since late March. One of the most promising comes from Inovio Pharmaceuticals of San Diego, which is wrapping up a small safety trial in humans.

But the coronavirus won’t be vanquished quickly.

UCSD, like the rest of society, needs a coronavirus vaccine to help return things to normal. Dr. Davey Smith, chief of infectious diseases at UC San Diego, explains how the global effort is unfolding.

Developing a successful vaccine is hit or miss under any circumstances. And SARS-Cov-2 is a fickle and baffling new virus.

It causes horrible symptoms in some people, but not in others. It’s so complex and pernicious that scientists say there’s little chance that the Trump administration will be able to fulfill its promise to produce 300 million doses of SARS-CoV-2 vaccine by January.

“I really think it is going to be another year, if not longer, before I can get vaccine at my pharmacy or doctor’s office,” said Dr. Davey Smith, chief of infectious diseases at UC San Diego.

Dr. Davey Smith is a translational research virologist, shown in the lab at UC San Diego on June 2, 2020.

“It’s not only that we are testing it in people, we have to see if it works ... We are very early in the process.”

Smith’s lab is a couple of miles south of Scripps Research, where immunologist Dennis Burton has found just as much reason to be circumspect.

“If everything goes smoothly you might know as early as fall if you have a vaccine that’s likely to be effective,” Burton said. “But you’ve still got to mass produce it and test it in lots of people.

“New pathogens present all sorts of problems. There can be roadblocks you haven’t anticipated. I think that’s the case here.”

Associate scientist Dinah Amante looks at cell in a lab at Inovio Pharmaceuticals, a biotech company in San Diego that is developing a vaccine against COVID-19. The company’s vaccine is already in clinical trials, and they are one of the leaders in the hunt for a coronavirus vaccine.

Most research efforts end where they begin — in the lab.

It can be very difficult to find the weak spot in a virus and how to get the immune system to launch a counter-attack. Many viruses also mutate, making them harder to disable. That’s proven to be particularly true of HIV/AIDS.

Some research efforts do produce experimental vaccines, and they often work well in animals. But then they fail in humans.

Scientists have a phrase for it: Mice lie, monkeys exaggerate.

Case in point: In 2007, Merck suspended a 3,000-person HIV vaccine trial after signs that it made some people more likely to get the disease.

Taming the novel coronavirus won’t be any easier.

“We’re about six months into to this virus infecting humans and causing disease and scientists don’t quite understand all the nuances,” Smith said.

“How does it cause illness in some people and not in other people?How do people stay asymptomatic but able to spread it to a whole bunch of other people? Some people don’t have a lot of virus but still get very sick and end up in the hospital and even pass away.

“We’ve tried getting vaccines for coronaviruses before, particularly SARS and MERS. We just haven’t done it yet. We think this is going to be a hard effort.”

What can go wrong?

In the shipping room at Cutter Laboratories in Berkeley, Calif., workmen label the priority packages of Salk polio vaccine for distribution to West Coast points under direction of the Polio Research Foundation, April 13, 1955. Cutter Laboratories, along with other leading drug manufacturers, has been preparing a supply of the vaccine in anticipation of approval of the recent nationwide Salk vaccine tests.

If a vaccine isn’t manufactured correctly, it can hurt or kill people.

That’s what happened in 1955 after the federal government declared that Jonas Salk had developed the first safe and effective drug to fight polio.

Cutter Laboratories of Berkeley was among the companies that were awarded a license to produce the new vaccine, which was supposed to contain inactivated polio virus. Instead, Cutter inadvertently produced a vaccine with live polio virus, a mistake that wasn’t caught by safety investors.

Federal authorities say the flawed vaccine led to 40,000 cases of polio that left 200 children with varying degrees of paralysis, and which killed 10.

Kate Broderick is the senior vice president of research and development at Inovio Pharmaceuticals, a biotech company in San Diego that is developing a vaccine against COVID-19. The company’s vaccine is already in clinical trials, and they are one of the leaders in the hunt for a coronavirus vaccine.

Inovio Pharmaceuticals is based in Pennsylvania, but its COVID-19 vaccine work is being done in San Diego, where it has operated research and manufacturing sites for 20 years. Inovio was the second company in the world to test a COVID-19 vaccine in people. Its scientists went from the concept stage to an experimental vaccine in 83 days.

Inovio’s vaccine uses DNA to teach the immune system to recognize a piece of the novel coronavirus.

Later this month, Inovio will report how well the vaccine did during a Phase 1 safety trial involving 40 patients. If things look promising, the company will move on to a larger trial involving thousands of people. That trial could start as soon as July and wrap up by the end of the year, according to Kate Broderick, Inovio’s senior vice president of research and development.

The first companies to develop and manufacture safe, effective vaccines can expect to cash in big time.

“It’s almost going to be like the market for aspirin in terms of the number of people that it will be administered to,” said Joe Panetta, president and CEO of Biocom, a San Diego-based life sciences trade group.

It’s unclear what the vaccine will cost consumers. But investors say the market will entail hundreds of millions — and possibly billions — of people who will want the vaccine.

Even the slightest glimmer of hope is moving markets. Shares in publicly-traded company Moderna rose 33 percent in May after it reported encouraging initial evidence from a Phase 1 safety trial. And Inovio’s shares climbed 22 percent, even though the company only had results from experiments in mice and guinea pigs.

It’s likely that vaccination won’t be a one-time affair. As the virus changes and immunity wanes, people will need to be immunized again. There’s no telling how often that will have to happen, though studies of other coronaviruses suggest that immunity could last for a few years.

Diplomatic relations between the U.S. and China have been tense in recent years, primarily due to trade issues. Things have grown worse in the wake of the novel coronavirus. President Trump accused China of failing to do enough to present the spread of the virus — a charge China denies.

There has been concern among scientists and policymakers that the tension could make the countries less likely to share any vaccine they come up with.

Despite such tension, many American scientists, including those at UC San Diego, continue to collaborate with their Chinese counterparts on such things as viruses and vaccines.

That work needs to flourish, according to Susan Shirk, chair of the 21st Century China Center at UCSD. Shirk said, “We don’t know which vaccine will work best and given the need to vaccinate billions of people throughout the world, we will need several different vaccines.

“Much of the vaccine research in America is being done by international teams of scientists or by Chinese Americans,” she said. “This is the time for the U.S. and China to lead a global plan to test, manufacture, and fairly distribute the vaccine. Without that none of us will be truly safe.

“In the past, the U.S. and China cooperated well to fight common public health threats like SARS, Ebola, H1N1 flu. But this time the epidemic has worsened an already acrimonious relationship between the two and they have failed to coordinate their efforts against COVID.” 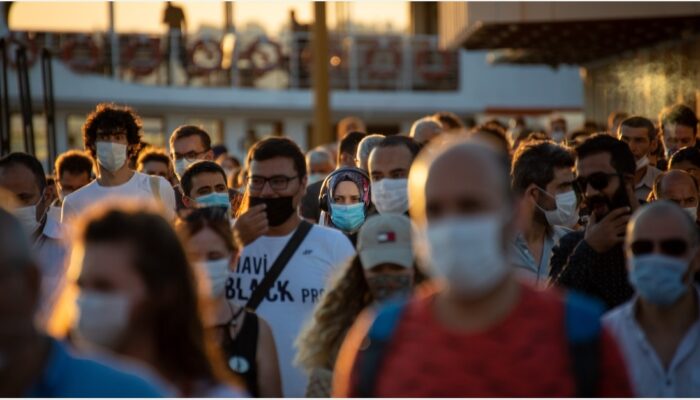 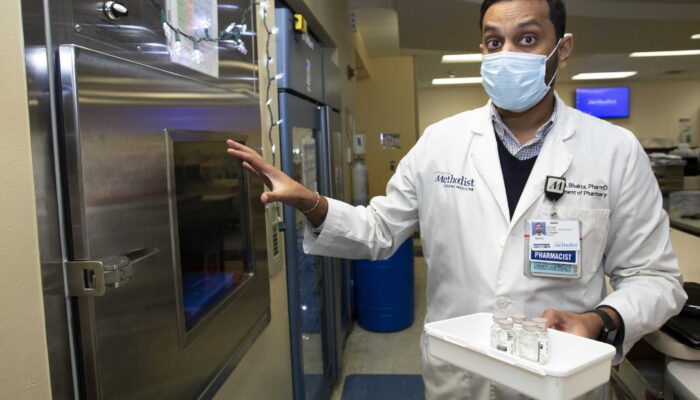 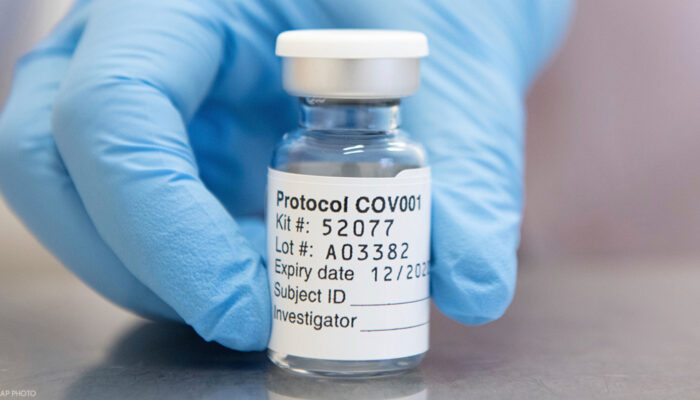 About the Author: San Diego Union-Tribune