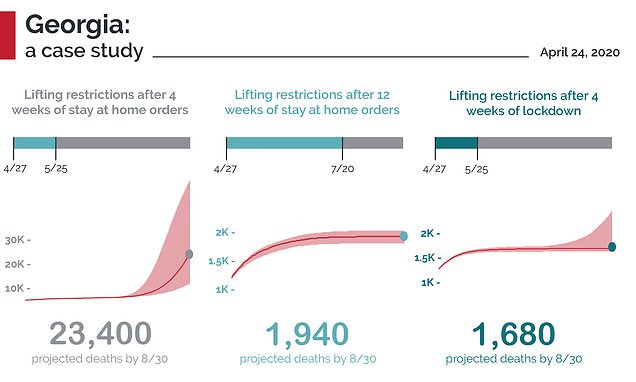 A new COVID-19 simulator tool is projecting that Georgia could see more than 23,000 deaths by the end of summer if the state is found to have relaxed its coronavirus lockdown measures too soon.

Georgia is among the fastest in the US to reopen its coronavirus-ravaged economy despite warnings from health experts of a potential surge in infections and disapproval from President Donald Trump. Georgia currently has 24,604 cases and 1,022 deaths as of Tuesday.

The model simulator, created by the Massachusetts General Hospital and Georgia Tech University, estimates that even lifting restrictions gradually over the next month could result in 23,400 projected deaths by August 30.

Keeping current restrictions in place until July could contain the epidemic and could result in about 2,000 deaths, according to the model.

If a more restrictive lockdown was initiated for four weeks, which would include bans on inter-state travel and local travel, the estimated deaths by August 30 would be 1,680, the model found.

The model estimates that even lifting restrictions gradually over the next month could result in 23,400 projected deaths by August 30 in Georgia

In Texas, the model predicts deaths could reach 12,800 by August 30 if restrictions are lifted after four weeks of stay at home orders

Meanwhile in Texas, the model predicts deaths could reach 12,800 by August 30 if restrictions are lifted after four weeks of stay at home orders.

Those projected death would decrease to 1,180 if restrictions are lifted after three months.

Texas partially reopened last week but the governor announced on Monday that state’s stay-at-home order would expire April 30. Currently there are 26,405 cases in Texas and 687 deaths as of Tuesday.

The modeling predicts that current restrictions being implemented in various states could see the US death toll reach about 86,000 fatalities by the end of the summer.

It comes as some Georgia restaurants reopened for limited dine-in service on Monday as the state loosened more coronavirus restrictions.

Dine-in service and movie screenings were allowed to resume a few days after some other businesses, including barbershops, gyms, tattoo shops and nail salons, began seeing customers.

While many of those establishments gratefully opened their doors Friday after a month-long closure, others did not feel ready.

The University of Washington’s Institute for Health Metrics and Evaluation model projects 74,073 Americans will die from the coronavirus by August 4

These forecasts cited by the CDC track the number of COVID-19 death since February and show the estimated deaths across the US in the next four four weeks. All of the models assume that existing social distancing measures will continue, while the Columbia University (CU) models makes various assumptions on the effectiveness of current social distancing interventions

As various other businesses reopened in Georgia on Monday, McDonald’s, Chick-fil-A and Dunkin’ said they have no plans to reopen their restaurants in the state.

They will, however, continue to offer takeaway only.

Among the many new protocols set down in order to reopen, Georgia restaurant workers must be screened for illness and wear face masks at all times.

Tables inside the restaurant can seat no more than six and must be 6ft apart.

McDonald’s told DailyMail.com its top priority is the safety and well-being of its people and customers, ‘which guides our decision making’.

‘This is not a race,’ the company said. ‘As states ease restrictions, we will move thoughtfully and judiciously to make changes to our operations in collaboration with our franchisees, when McDonald’s is ready.

‘While McDonald’s continues to assess plans for the future, we will continue serving customers across the US through Drive-Thru, walk-in takeout and delivery.’

McDonald’s said it has implemented changes in nearly 50 processes in its restaurants ‘for the protection of our people and customers’.

A similar mixed response played out Monday with many eateries remaining closed amid concerns that serving in-house meals could put employees and customers at risk.

Kemp issued 39 requirements that restaurants must follow if they reopen, including observing a limit of 10 customers per 500 square feet and ensuring that all employees wear face coverings all the time. Movie theater ushers were ordered to enforce social distancing.

The shutdown imposed to slow the spread of the coronavirus has caused tremendous damage to the economy. About a fifth of the state’s workforce – 1.1 million workers – filed for unemployment in the five weeks since the crisis started, according to the Georgia Department of Labor.

But public health experts say increased testing and diligent tracking of infected people’s contacts are needed to guard against a spike in new cases if reopening happens too quickly. Georgia has ranked in the bottom 10 of states for testing per capita, but some progress was made on that front last week.

State and local health officials in Georgia are also teaming up with the Centers for Disease Control and Prevention to do antibody testing to get an idea of how many people have already been infected with the virus.

Public health workers plan to visit randomly selected homes in two Atlanta counties from April 28 to May 4 to ask residents to answer questions and provide a blood sample, according to a news release from the state Department of Public Health.

Antibody tests cannot determine if a person has an active case of COVID-19, but they can identify people who were infected but did not have symptoms or were not tested.

A customer sits at the counter for dine-in service while other seats are marked off for social distancing protocol at a Waffle House in Brookhaven, Georgia on Monday

About the Author: Emily Crane