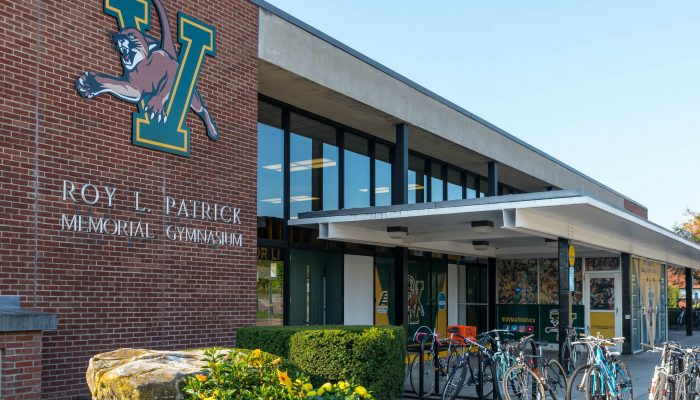 BURLINGTON — A global pandemic was the last thing on the minds of fans as the University of Vermont men’s basketball team pulled out a 81-74 victory against University of Maryland Baltimore County on March 10. More than 3,200 fans filled UVM’s Patrick Gym wall-to-wall, breaking into chants and roaring with enthusiasm as the home team held on to a narrow lead and secured its trip to the conference finals.

At the time, Vermont had just one Covid-19 case, in the southern part of the state, and Gov. Phil Scott wouldn’t put in place his “stay home, stay safe” order for another two weeks.

But the virus may have been silently spreading. At least six people who attended the game later tested positive for the virus. Five sat in section 4, including Bernie Juskiewicz and Mike Rappold, who both ultimately died of Covid-19. The Vermont Department of Health has not traced any cases to the game, but the preponderance of attendees who later tested positive raises questions about the accuracy of the state’s timeline of the progression of the disease, and the arrival of the coronavirus in Vermont.

On the afternoon of March 10, Rae and Mike Rappold didn’t think twice before leaving for the game, Rae said. The Cambridge residents had been season ticket holders for more than a dozen years, and this was the playoffs. The men’s team had finished the season first in its division with a 14-2 record (26-7 overall), and coasted to a victory in a first-round game against the University of Maine the previous week. “If I told you not to go, you would have gone anyway,” Rae’s son told her later.

UVM officials didn’t have any qualms about holding the game either; they did not contact the Department of Health in advance to ask about proceeding, said UVM spokesperson Enrique Corredera. “The state had taken no action yet and there were no known cases in our area,” Corredera wrote in an email to VTDigger. No other Division 1 or professional games had been canceled at the time, he added.

Nationwide, 1,000 cases had been confirmed, mostly in New York and West coast states; businesses and colleges had already started to close in-person operations.

The university did issue safety recommendations, asking those who had traveled to Italy, South Korea, Iran or China, as well as those with flu symptoms, to stay home. University staff had disinfected the facility before the game and put out stations with hand sanitizer. A press release issued that day offered “strong encouragement of a no handshake or high five policy at tonight’s game.”

The bleachers were packed “like sardines,” Rae Rappold said. The crowd spurred the team on as it played neck and neck with UMBC and then pulled ahead for good at the end of the first half.

VTDigger is underwritten by:

The Rappolds stayed in their seats, section 4 row E, for nearly the whole game, Rae said. When she got up to use the restroom at halftime, a woman at the end of the row grabbed her hand to steady her. “Oh, we’re not supposed to be doing this,” Rae jokingly chided her. “Truthfully, I thought it was overkill at the time, I really did,” she said.

“We weren’t thinking about Covid at all,” said Suzan Juskiewicz, who sat one row behind the Rappolds. “There was no reason to.” She primarily recalled the tangible sense of nerves and elation in the crowd.

Sporting events have been spreading events around the country. Five people died after attending a March 6 high school basketball game in Indiana. Seven attended a tournament in Levelland, Texas that same day and later tested positive for Covid-19.

Attendees at the UVM games are primarily older, and thus particularly vulnerable to Covid-19. Most of the arena is reserved for season ticket holders such as the Rappolds and Juskiewiczs, with a smaller number of day-of-game ticket sales and student seating. The bus to the game looks like “an old folks shuttle,” Rappold said.

But the virus didn’t spare younger fans. Nicky Patterson, a 45-year-old St. Albans teacher, sat in the last row of section 4, and stood up the entire game to avoid contact with the man sitting next to her, who coughed and coughed, she said. She came down with a similarly nasty cough three days later, which ultimately proved to be Covid-19.

Her parents and uncle who sat on her other side never got sick, she said. Patterson’s aunt did lose her sense of taste and smell — symptoms of the coronavirus — but was never tested.

Across the court in the production booth, on the second floor looking down onto the gym, broadcaster Jamie Scavotto worked with his partner at the Northeastern Sports Network, which was covering the game. Five days later, Scavotto got a text that his coworker had tested positive for the coronavirus. The employee who tested positive did not respond to requests for comment. Scavotto did not get sick, he said.

Contact tracers from the Vermont Department of Health never identified a link between the game and the infections, said Deputy Health Commissioner Tracy Dolan. They did interview all those who tested positive for Covid-19 and had received several calls from Vermonters about the game, but, “We have no knowledge of any outbreak,” Dolan said. “We haven’t identified any cases, nor have we identified any deaths associated with a basketball game.”

Corredera, the UVM spokesperson, said he was not aware of any positive cases, noting that there had been no Department of Health announcement.

But even by March 10, there had been cases in UVM’s Patrick Gym.

The America East Conference notified the public on March 18 that two referees at the March 7 game in Burlington against University of Maine had later tested positive for the virus.

After that game, UMaine players, staff, coaches and staff self-quarantined for two weeks, according to the team’s spokesperson Tyson McHatten. None reported Covid-19 symptoms, he said.

UVM did not require players and staff to self-quarantine after the University of Maine game.

VTDigger is underwritten by:

After learning of the exposure, “we immediately contacted Vermont Department of Health officials — who assured us that this was not a concerning exposure, given the gap of time between the game and the onset of symptoms, which the officials developed at least three days later,” Corredera said. The health department said the university did not need to quarantine, notify the public, or start contact tracing, according to Corredera. Since then, researchers have posited that those with Covid-19 can spread the virus before they get sick, or without ever experiencing symptoms.

None of those who attended and later tested positive for the virus said they were sure they had contracted the infection at the game. “It could have been anywhere,” Suzan Juskiewicz said. Corredera said he would defer to the Department of Health in deciding whether the game was a spreading event.

Regardless, the game marked the end of the season.

The championship, scheduled for Saturday March 16 against Hartford, was canceled two days before it was to be held. The winner would have received an automatic bid to the NCAA tournament, which was also canceled.

Rows of cots line the floor of the basketball arena inside UVM’s Patrick Gymnasium, the site of a medical surge facility for the UVM Medical Center. Photo by Mike Dougherty/VTDigger

Within weeks, the UVM Medical Center repurposed Patrick Gym as a surge site, in case the hospital filled with Covid-19 patients. The bleachers were removed; plastic covered the court, and cots lined the space where players might otherwise have competed.

But at the time, the university couldn’t have done anything differently, said Rappold. She’d “never, ever, ever” cast blame on them, she said.

In fact, after Mike Rappold died, Rae found a letter her husband scrawled on a notepad, addressed to UVM Men’s basketball “athletes, coaches, and managers.”

“As an avid UVM BB fans [sic], my wife and I would like you to know how upset and sorry (p-offed) we are that the American East 2020 championship game has been canceled,” it read, with words crossed off and crammed in the margins. “We understand this cancellation is necessary to help from spreading this virus. My wife and I want you all to know how much we appreciate your hard work, dedication to be the best you can be.”

After Mike died, Rae typed up the letter and sent it along to UVM coach John Becker.

Last week, she received an email from UVM inviting season ticket holders to renew their tickets for next year. The prospect of a basketball season is up in the air, the email acknowledged; there’s little room in the gym for social distancing. But, the email struck a hopeful tone. “While there are obviously still questions to work through regarding spectator attendance, please know that your presence and support at our games and events is a critical piece of what makes Catamount Athletics so special,” Director of Athletics Jeff Schulman wrote.

Rae Rappold, for one, said she planned to sign up.

📈 Get the latest statistics and live updates on our coronavirus page.
📫 Sign up for our coronavirus email list.
🗣️ Tell us your story or give feedback at coronav[email protected]
❓ Get answers to FAQs in our Covid-19 knowledge base.
🛒 See what’s open near you in our business directory.
🙏 Support our nonprofit journalism with a donation.

Sign up for our guide to the global coronavirus outbreak and its impact on Vermont, with latest developments delivered to your inbox.

VTDigger serves a vital role in delivering news that changes the terms of many debates. Digger reporters engage us, enlighten us and offer “real eye openers” about issues of the day.

About the Author: Katie Jickling