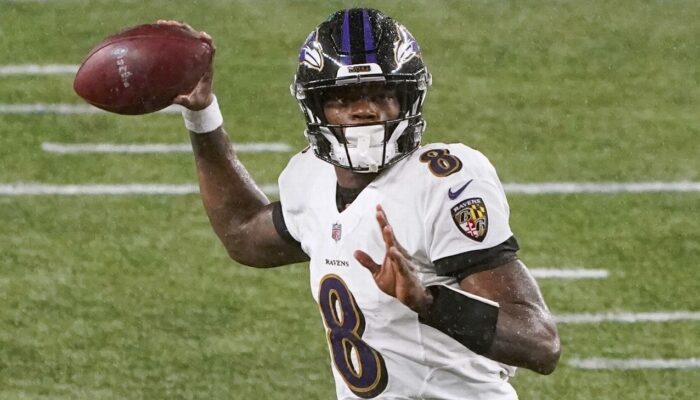 Jackson, who tested positive for the coronavirus on Thanksgiving, completed his 10-day quarantine Saturday and is eligible to be activated off the reserve/COVID-19 list Sunday. The reigning NFL MVP can practice Sunday and participate in Monday’s walk-through before the game against the last-place Cowboys (3-8), which was rescheduled twice because of the Ravens’ recent COVID-19 outbreak.

Over the past few days, Jackson has been “fully engaged” in the virtual meetings and watches film of what the Ravens are doing at practice, offensive coordinator Greg Roman said.

“So, he’s really lockstep, each and every step through,” Roman said. “The only thing he can’t do is, obviously, be here at the facility and actually take part in it. But, mentally, he’s right on it.”

The return of Jackson is timely because backup Robert Griffin III, who filled in for Jackson in a 19-14 loss in Pittsburgh last week, was placed on injured reserve Friday with a hamstring injury. That left Trace McSorley, a 2019 sixth-round pick who has thrown six career NFL passes, as the only quarterback on Baltimore’s active roster. McSorley will now serve as the primary backup to Jackson.

Jackson can play Tuesday after being activated two days before the game because there is no official “ramp-up” period for players coming off the reserve/COVID-19 list, according to NFL rules. It’s the decision of the medical staff to clear him.

Baltimore (6-5), which has lost three straight games to fall to third place in the AFC North, is getting Jackson back for a critical season-ending stretch. In order to reach the playoffs for a third straight season, the Ravens likely need to win at least four of their last five games, which includes the Cowboys, at the Cleveland Browns (8-3), home against the Jacksonville Jaguars (1-10) and New York Giants (4-7), and at the Cincinnati Bengals (2-8-1).

Jackson is the latest starter to come back for Baltimore, which went through one of the biggest coronavirus outbreaks in professional sports. Over the previous two days, the Ravens activated seven players off the reserve/COVID-19 list, including defensive end Calais Campbell, running back J.K. Dobbins and outside linebacker Pernell McPhee.

Baltimore will still be without tight end Mark Andrews, outside linebacker Matthew Judon and wide receiver Willie Snead IV for Tuesday’s game against Dallas, but all three starters should return for the game against the Browns. On Saturday, Ravens president Dick Cass indicated there were at least four strains of the coronavirus found in the Ravens’ facility.

About the Author: ESPN.com