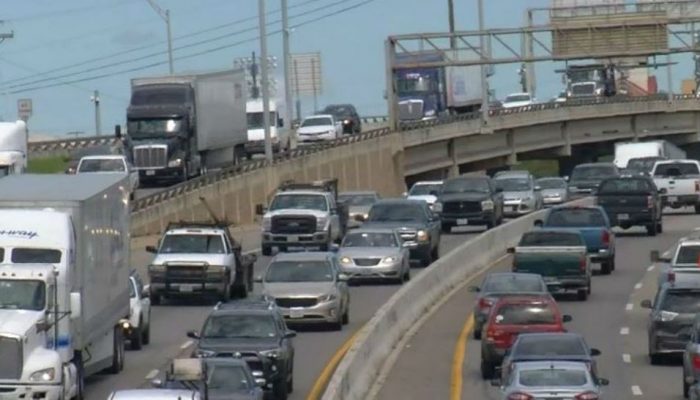 AUSTIN, Texas — The coronavirus pandemic and plunging oil prices are dealing a double blow to the Texas economy.

This comes as the Texas Transportation Commission is poised to consider a major spending decision on Thursday. The commission could decide to approve $3.4 billion to fund Interstate 35’s expansion through the greater Austin area, despite two influential state lawmakers calling for a delay on the pivotal vote.

The commission is scheduled to take up updates to the Unified Transportation Program, a 10-year plan to guide the state’s transportation project developments. In a joint-letter to the head of the transportation commission, state Rep. Terry Canales, D-Edinburg, and state Sen. Robert Nichols, R-Jacksonville, urged postponing adoption of the UTP’s revisions citing “Immense volatility in global financial markets, a near collapse in the oil market, and a threat of a potential recession.” Both lawmakers chair the transportation committees in their respective chambers of the Texas legislature.

The letter said in part, “The 10-year UTP is based on estimated revenues over a 10-year time period, and since these estimates were last made, there have been substantial changes that have not yet stabilized.”

Texas’s transportation projects are largely dependent on oil and gas production tax revenue. The coronavirus pandemic has also pumped the brakes on economic activity across Texas, which will surely impact sales tax revenue as well.

In an email to Spectrum News, a spokesperson for the TxDOT said in part, “At this time it would be premature to make any projections on funding impacts during this global pandemic, though we are closely monitoring revenue information shared by our state comptroller. We remain committed to meeting the state’s transportation needs and ensuring current projects move forward.”

Echoing the financial alarm, the Texas Association of Business is urging the commission to consider alternative sources of funding. President and CEO Jeff Moseley is asking the state to reauthorize public-private partnerships and manage toll lanes.

“Given the fact that Texas is facing very difficult economic circumstances due to COVID and due to the Permian Basin economy collapsing, that it’d be a good time to take a look at private investment,” he said.

The total project costs $7.5 billion and would overhaul I-35 from Round Rock to Buda. Another piece of the funding puzzle would come from the Capital Area Metropolitan Planning Organization. Elected officials from Travis, Williamson, Hays, Burnet and Blanco Counties govern the Transportation Policy Board. Earlier this month, the board committed $633 million to help fund the balance of the I-35 project. But in order to free up the money, CAMPO staff must reallocate funding from already planned projects, which would have to be deferred.

One project that could be delayed is the Northern Walnut Creek Trail. Once completed, the nearly 20-mile trail network would connect the Govalle Neighborhood Park in East Austin to the Balcones District Park in North Austin.

“A lot of people live in this community and don’t feel like they have a lot of options for walking and biking, so that would provide an option to get to let’s say work destinations on I-35, and eventually to east of I-35. There’s also the recreational opportunities. People are discovering even more so now, that our public spaces, our parks and our trails are really that much more important for people to get outside,” Tom Wald, executive director of the Red Line Parkway Initiative said.

The next phase of Northern Walnut Creek Trail’s extension would connect Walnut Creek Metropolitan Park to I-35. The anticipated timeline originally had construction begin in 2021.

“My concern is that if we defer it, it’s not clear when the funding will come back and it could jeopardize the project, which a lot of people, a lot of people love,” Wald said.

A CAMPO spokesperson said the board is expected to make a final decision on impacted projects in June.