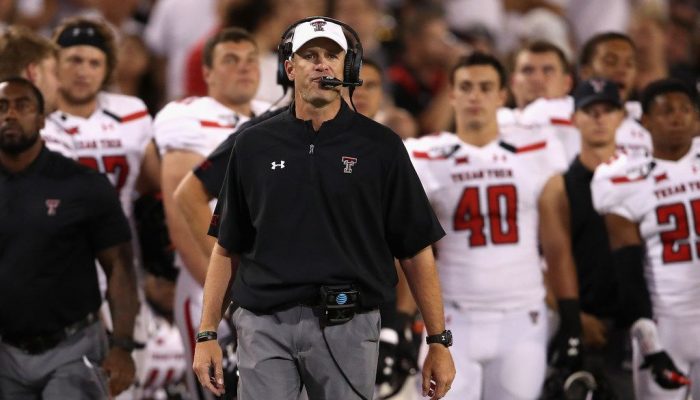 Matt Wells politely asked the interviewer to hold Friday morning to take a call from a current player and see if something was amiss.

The second-year Texas Tech football coach has gotten pretty good at switching gears, talking on FaceTime to 10-12 of his 108 players daily during the enforced hiatus created by the coronavirus pandemic.

“Every meeting, every phone call can be interrupted by one of my current players,” Wells said, “and a really good recruit too.”

Any type of humor right now is welcome, as Wells knows. So is just keeping the lines of communication open.

“That’s one of biggest priorities in this whole thing is to try to continue and deepen our relationship with our players,” Wells said.

In some ways, Wells acknowledges that he, his staff and the Tech players might have bonded more during the current outbreak than they would have had he completed a regular spring practice as scheduled with a spring game April 10 in Lubbock.

“We’re doing some things that we wouldn’t have done if we were in the office,” Wells said. “Instead of sitting around crying about the things we wish we were doing if we were still in the office and on the practice field – which we all wish we were – we’re just going to make the best of it. We’re going to control our response.

“And we’re going to get better at it.”

One of those things is personal relationships, from health to family to personal workouts.

Unlike some schools, Tech was already four practices into the spring and was preparing for its first scrimmage on Thursday, March 12. He was aware from news headlines that NBA player Rudy Gobert had tested positive for COVID-19.

Wells had already sat in on a meeting with defensive coordinator Keith Patterson and his staff and then headed to this office to watch the start of the Texas Tech basketball game against Texas in the Big 12 men’s tournament in Kansas City. The game never happened.

For the next couple of hours, he was in conversation with AD Kirby Hocutt in Kansas City.

“We didn’t know exactly what the scope of it was at that time,” Wells said. “Nothing was mandating us to come off the field. I just made a decision that afternoon not to scrimmage. You had a feeling or you were wondering if we were even getting back to spring ball.

“With an answer of maybe no, I didn’t want to put my guys in harm’s way in terms of a scrimmage. I felt that would have been irresponsible for me in terms of my kids, their health and safety.”

While acknowledging the injury factor in football, “this situation was different.”

Since then, Wells and his wife, Jen, have been active in supporting the newly formed South Plains COVID-19 Response Fund.

“I do see that as part of my role is getting involved in the community and trying to help something, in this case reduce the spread of this virus,” Wells said. “How can I help this cause?”

Wells went 4-8 in his first season at Tech after being hired from Utah State.

He views the four practices as a plus.

“Yeah, we had four legit good practices,” Wells said. “Better four than none.”

Despite a full season, he still feels like he’s in Year 1, with the offseason workouts in January and February building to the four practices. He’s focused on things like player accountability and player discipline on and off the field.

“The great program will come after the culture is set. And I really believe you set the culture in the first couple of years in a program,” Wells said.

“So we’re still in the middle of that with the program. Unfortunately now we’re doing it remotely. We have it to do it in different ways.”