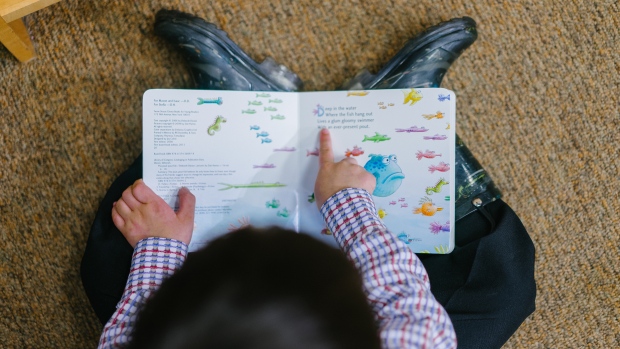 
TORONTO —
Younger children learning to read need more support from parents and teachers during online learning or school closures or they could drop dangerously behind, according to an educational psychology professor.

George Georgiou, a professor at the University of Alberta, completed two studies into reading ability, one of which looked at broader test scores and compared them to past years, and the other which tracked a specific group of students in the province.

“For the struggling readers in our upper grades, they remain struggling readers, but they didn’t get worse,” Georgiou told CTVNews.ca in a phone interview. “For the younger kids though, those who were struggling, they got worse during the pandemic.”

Some of the research came about by accident; Georgiou adapted a project that had been interrupted by the pandemic in order to study the effects of the shutdown instead.

Georgiou said he had received funding from Alberta Education to study the reading capabilities of Grade 1 students for a completely different study into teaching practices. They assessed students from a number of schools in northern Alberta in early 2020, and identified around 500 who were struggling with reading. The students were then given small group breakout sessions in order to try and give them extra help — but when the pandemic struck, these sessions were disrupted as children were sent home.

“What happened once schools closed is that support was taken away,” he said.

Georgiou’s research was also stalled by the shutdown, but in September when schools reopened for in-person classes again, Georgiou was able to assess the same students’ reading ability once again, effectively measuring their ability before and after the shutdown itself.

“Right after the school reopened, we were able to tell what was the impact of the school closures on the reading performance of these kids,” he said.

Only 409 of the original group were retested, but the results were dramatic.

“We found that about 80 per cent of them were still struggling in reading,” he said, adding that it should’ve been “the other way around.

“So 20 per cent of them should have been struggling under normal circumstances.”

To get a fuller picture on how reading ability has been impacted by the pandemic, Georgiou also looked at data that had been gathered on reading ability in children from previous years. One dataset involved 25 Alberta schools which had assessed children using standardized reading evaluations over the past two years, with around 4,000 students per grade level. Another dataset Georgiou accessed included eight schools who had test data on reading level that went back five years.

By comparing the average from these test scores in previous years to test scores from the same schools in September 2020, Georgiou found that there was a split between older and younger grades.

The scores generally were positive for Grade 4 and up, with a few exceptions, showing those students were largely able to improve their reading during the pandemic, but students in Grades 2 and 3 were scoring worse than previous years.

Georgiou noted that the younger kids were around four to eight months behind according to the scores, meaning the deficit is not irreversible, but it’ll take extra attention from parents and teachers to help them catch up, particularly if more regions close schools down again.

“The optimal window for a child to learn to read is in kindergarten to Grade 3,” Georgiou explained.

Around 75 per cent of those who are still poor readers by the end of Grade 3 remain poor readers for their entire lives, Georgiou said. It is a critical time to make sure children have the skills they need, and it helps to explain why children in older grades were able to maintain their reading skills during shutdowns.

Because young children don’t have the attention span to stay focused on a computer screen for hours for online learning, parents and teachers need to find other ways to provide extra support for reading at home when children are unable to go to school, he said.

He said teachers who are running online classes might find it more helpful to “focus on the most important foundational skills for learning to read,” instead of trying to cram in the full lesson that might be taught in an in-person class.

Parents have an important role to play as well during online learning.

“We need their help, because kids are spending more time on homework now than in school,” he said.

He recommends that parents read to their child “for 20 to 30 minutes on a daily basis,” in order to help strengthen those early reading skills. There are resources online for downloading bookstore free, and teachers could assist by sharing books online too, he said.

“When [parents] read to their kids, they have the opportunity to elaborate on the vocabulary in the stories, along with the meaning of the stories,” Georgiou pointed out. “So they can enhance kids’ comprehension, and they are also able to approach the content of any story in a creative manner. That is very important in the future.”

Reading ability can have a huge impact on a child’s future, he said. Poor reading is associated with higher dropout rates and higher unemployment rates.

Georgiou believes that his work represents a “unique data set” because they were able to measure specific children’s reading ability right before the lockdowns occurred, and then follow up with those same children when schools re-opened.

“[The research] started with a different intention, but because we have the data, that allowed us to also explore and answer this question,” he said.

He emphasized that this data does not mean that the specific school districts which the 409 kids belong to are simply doing a terrible job. The wider data shows that reading scores are down in 2020 for younger children across numerous schools, indicating that it is a more widespread issue.

Georgiou has submitted a paper on his research to The Reading League Journal, where it is currently under review.

About the Author: CTVNews