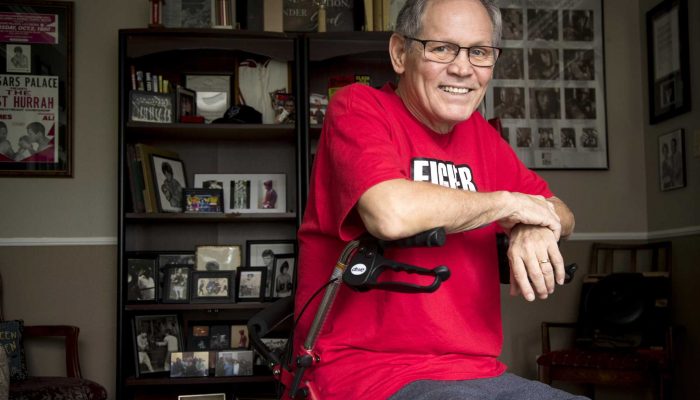 Maurice “Termite” Watkins survived 138 amateur and 69 professional boxing matches and a trip to post-Gulf War Iraq that began as a mission to eradicate vermin and ended up with a trip to the 2004 Athens Olympics as coach of an Iraqi boxer.

Watkins, 63, who has always cut a unique figure among the singular personalities that populate the sweet science of boxing, is recovering at his Houston-area home after a four-week hospital stay that included two stints on a ventilator after being diagnosed with the new coronavirus.

Recovery will be slow and measured — there were times Monday when Watkins, who loves nothing more than a good conversation, had to leave conversational duties to his wife, Cindy — but he’s on the mend.

“The positive is that I’m home and I’m progressing,” Watkins said. “But it was really bad.

“I was thinking about how I went to Iraq (in 2003) and have been all around the world and never felt threatened, even during a war, and this brought me down within a matter of days. It was unreal.”

Watkins, co-founder of the Fighter Nation boxing gym in Houston, believes he was exposed to the virus during a trip to Dallas in late March.

Symptoms progressed from body aches to fever to nausea to shortness of breath, and he was hospitalized March 26 at Memorial Hermann Hospital Northeast in Humble and informed a day later that he would require help from a ventilator to survive.

“I had to have that hard conversation (with his wife),” he said. “Man, it was a tough, tough deal. I had to say goodbye, basically.”

Cindy Watkins said she tried to reassure her husband that his physical strength and religious faith would carry him through, “but it was a hard conversation. I believe that God can heal, but things don’t always turn out like you want them.”

Watkins spent about 2½ weeks on a ventilator and, after his condition briefly worsened, another day and half on the machine before he once again could breathe without needing assistance. He was released from the hospital on April 22.

“He put a face on the virus for a lot of people,” Cindy Watkins said. “It was scary. It was really scary. We heard from hundreds of people who were praying for him, and we believed God was going to heal him.”

Watkins, who got his nickname from his family’s pest control business, was the 1973 Golden Gloves national champion at 125 pounds, He fought as a pro from 1974-90 at the 140-pound light welterweight class with a record of 61-5 with two draws and one no-contest.

He had fights at the Summit, the Miami Beach Convention Center, Madison Square Garden and Caesars Palace, where in 1980 on the undercard of the Larry Holmes-Muhammad Ali fight he lost his only world title fight to Saoul Mamby for the World Boxing Council light welterweight championship.

Watkins said he weighed 197 pounds when he entered the hospital and lost 35 pounds in a month. He said he suffers bouts of light-headedness when he tries to get to his feet too quickly but otherwise emerged with his mental and emotional faculties intact.

“He’s as good as he could be right now,” Cindy Watkins said. “He’s out of the woods.”

The couple is grateful to doctors and nurses at Memorial Hermann Northeast — “They were our eyes and ears, and he wouldn’t be alive if not for the medical staff there,” said Cindy Watkins — and to well-wishers.

Among those passing along best wishes to Watkins, the couple said, was Najah Ali, the former Iraqi boxer who was recruited by Watkins during a 2003 trip to Iraq and represented his country in the 2004 Olympics in what is probably the best-known episode of Watkins’ career as a coach.

Watkins traveled to the Middle East in 2003 to do pest control in the port city of Umm Qasr. While working to wipe out swarming flies from a cafeteria used by U.S. troops, he was recruited to offer boxing lessons to U.S. and British troops and then asked to find and train an Iraqi boxer for the 2004 Olympics.

He recruited Ali, who qualified for the Olympics and had a win and a loss at the Athens Games before a brief pro career in England from 2008 through 2013.

Watkins has long dreamed of turning that episode of his life into a movie project and said he hopes to announce progress on that front soon.

For now, though, recovery is his primary concern.

“My hat is off to the doctors and nurses but also to the spouses (of COVID-19 patients). They’re the ones who go through heck,” Watkins said.

“This (COVID-19) is a new kind of monster,” Cindy Watkins added.

As he recovers, Watkins said he hopes the public will continue to practice social distancing and to heed the advice of public officials.

“Wash your hands. Wear a mask,” he said. “And use this time as family time. I have to tell you that my family (he has four children, and Cindy Watkins, his wife of almost nine years, has three children) means so much to me. Use this time to get closer to yours’.”

About the Author: David Barron