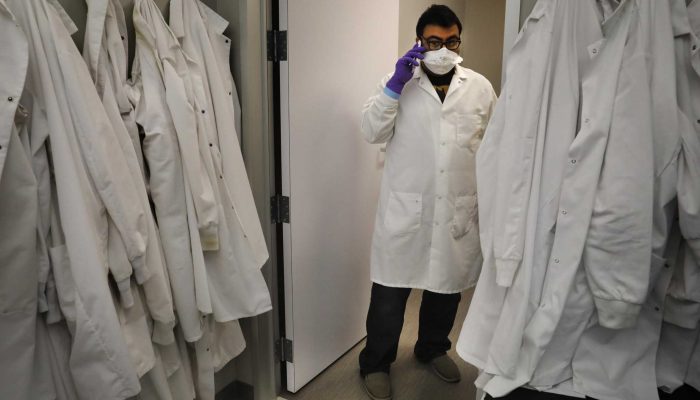 Dr. Gulshan Sharma, the vice-president and chief medical and clinical innovation officer of the University of Texas Medical Branch, was in a sanguine mood as he went for a walk near his home in League City on Saturday morning.

“I’m generally an optimistic person,” Sharma told me. “I think we will beat this curve. I think already the estimates have shown much better rates in terms of mortality and hospitalization than what was predicted four weeks ago.”

And although Sharma and his colleagues in Galveston have been at the frontlines of the coronavirus crisis, they’ve been insulated from some of the stressors that are taking a heavy toll on many health care workers across the country. They have adequate supplies of personal protective equipment, he explained, and sufficient capacity for testing patients who show symptoms of COVID-19.

Since March 13th, Sharma said, UTMB professionals have conducted 7,800 tests for the novel coronavirus that causes the disease — and by Friday, April 10, they were able to test 840 samples, as new testing platforms improve capacity.

That’s good news, but unfortunately it seems limited to Galveston County. A new analysis from the Houston Chronicle shows that when it comes to testing, Texas is severely lagging. In fact, we rank 49th out of 50 states in testing per capita, with just 332 tests per 100,000 people to date. Only Kansas is lower.

READ MORE: How many missed? Texas is second-worst in the nation for COVID-19 testing

It’s not clear why Texas is behind the curve, or whether state leaders are taking the testing shortage seriously. Some state leaders have already started talking about reopening businesses, a worrisome sign to many.

Galveston County has been testing people at roughly three times the statewide per capita rate, and UTMB has begun offering testing to nursing homes in the county in a bid to protect high-risk populations.

Harris County, by contrast, is struggling with shortages of testing equipment, in part because the federal government has sent scanty supplies to the nation’s fourth largest city. Harris County leaders announced Saturday that the federal government has agreed to double city and county site testing capacity, but that still won’t be enough, they said.

“What we need now is more testing because that’s the only way you’re going to measure the community spread,” Mayor Sylvester Turner said at a press conference Saturday. “There’s still vulnerable populations who don’t know whether they have it or don’t have it.”

Meanwhile, Republicans are getting antsy as the state’s macroeconomic indicators nosedive. Gov. Greg Abbott on Friday announced that some Walgreens stores will soon begin offering drive-thru COVID-19 testing. But he also said that he plans to ease his executive order locking down state businesses soon, via a new executive order.

“One thing about Texans, they enjoy working and they want to get back into the workforce,” he said at a news conference in Austin. “We have to come up with strategies on how we can do this safely.”

That’s true, but Texans don’t enjoy unnecessary loss of life. And, according to public health experts, any strategy for safely reopening the economy should include large-scale testing — including of people who are asymptomatic, which would give us a better idea of the virus’ attack rate.

Abbott seems to be putting the cart before the horse, which is troubling. Texans need more testing before we can safely reopen the economy, and although our capacity for testing is increasing, we’re not yet where we need to be.

We also need more transparency from state leaders about the challenges they’re confronting in dealing with this crisis, even if the news that they have isn’t auspicious — or reflects poorly on the Trump administration.

“Everybody know wants to know absolute truth, and we don’t have all the answers right now,” he said Saturday morning. “But we have been transparent and honest.”

That’s the approach that will give people the confidence they need to navigate the difficult coming weeks of this pandemic.