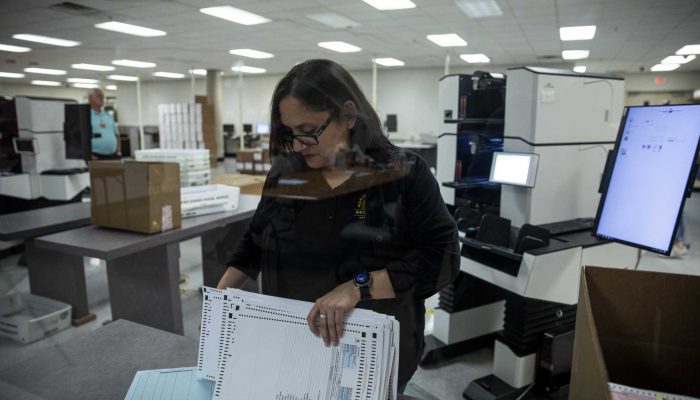 WASHINGTON — Just as Texas appeared to be opening the door to more voting by mail amid the coronavirus outbreak, the state’s attorney general slammed it shut.

Voters cannot cast ballots by mail if they are afraid of getting the coronavirus at polling places, Republican Attorney General Ken Paxton said on Wednesday.

His declaration came as a state district judge said he was inclined to grant a request by the Texas Democratic Party and a slew of civil rights and voter advocacy groups to declare that voters can mail-in ballots if they believe voting in person puts their health at risk.

Texas Take: Get political headlines from across the state sent directly to your inbox

Voting by mail has emerged as a major political fight amid the coronavirus outbreak, as civil rights groups and Democrats push for a national expansion of mail-in voting and Republicans, including President Donald Trump, push back.

“Republicans should fight very hard when it comes to state wide mail-in voting,” the president tweeted last week. “Democrats are clamoring for it. Tremendous potential for voter fraud, and for whatever reason, doesn’t work out well for Republicans.”

State law currently allows voters to claim “disability” and apply for an absentee ballot if showing up at a polling place risks “injuring the voter’s health.”

“Mail ballots based on disability are specifically reserved for those who are physically ill and cannot vote in-person as a result,” Paxton wrote in a letter on Wednesday. “Fear of contracting COVID-19 does not amount to a sickness or physical condition as required by the Legislature … The integrity of our democratic election process must be maintained, and law established by our Legislature must be followed consistently.”

The state’s elections director earlier this month issued guidance to elections officials in all 254 counties pointing to the election code’s disability clause, which voting rights advocates had claimed as a victory.

Attorneys for the Democratic Party argued in court on Wednesday that the disability clause “plainly provided for circumstances such as this when public health makes it dangerous to vote in person.”

But they said the courts need to make that clear as county officials are currently wrestling with how to conduct the upcoming runoff elections in July, when voters will pick a Democrat to challenge U.S. Sen. John Cornyn.

“This is a total muddled mess,” said Glen Maxey, the Texas Democratic Party’s primary director, who administers elections in dozens of counties, as he testified about the guidance during a court hearing on Wednesday. “We’re going to have a mishmash of who can vote and who cannot vote by mail in this election.”

But Anna Mackin, an assistant attorney general, argued that the law clearly does not cover those afraid of COVID-19 and urged state District Judge Tim Sulak “not to allow this global crisis to be manipulated as a basis for rewriting a provision of the election code.”

CORONAVIRUS COVERAGE: Keep up with the latest COVID-19 news

Sulak said he was inclined to issue a temporary injunction, though he did not issue a ruling on Wednesday. His decision will almost certainly be appealed to higher courts.

The disability clause “strikes me as almost being … self determined,” he said. “I think that there is the understandable need for some kind of clarity, some kind of uniformity.”

Texas is one of the few states that still require voters younger than 65 to have an excuse to cast a ballot by mail. Fewer than 7 percent of Texas voters mailed in ballots in 2018.

County officials have said they are waiting for either the courts or the state to offer them definitive guidance. For now, many are urging those who clearly can vote by mail — those who are over 65 years of age — to apply for a ballot.

“We don’t have any clear direction on if we’re going to open it up for anyone,” said Jacquelyn Callanen, Bexar County’s elections director.

Callanen said she’s being “very cautious,” especially as the issue is fought out in court.

“I don’t want people to rush into this and have a false sense of security that they’ll be mailed a ballot and then someone has pulled it back,” she said. “I don’t want to have them get caught in some sort of a crossfire.”

While both Democrats in the U.S. Senate runoff — former Air Force pilot MJ Hegar and longtime state Sen. Royce West — have urged the state to expand mail-in voting, U.S. Sen. John Cornyn, who the winner of that race will face in November, has opposed it, saying “there’s not the infrastructure in place to deal with mail-in ballots.”

Cornyn has argued Texas has a long enough early voting period to allow for voters to safely cast ballots in person, and has said that if voters “can go to the grocery store, they can go to the polls.”

But health experts, including Cathy Troisi, an epidemiologist at the University of Texas Health Science Center Houston, testified on Wednesday that there’s no way to make polling places as safe as someone mailing in a ballot, and said poll workers are especially at risk without personal protective equipment that’s currently in short supply.

Maxey, meanwhile, said many county elections officials have told him they expect they’ll only be able to get as many as 20 percent of their usual poll workers to show up in the midst of the outbreak.

And the chances this all will actually be cleared up by November’s elections are slim, Troisi said.

“The risk of it reappearing in the fall is very, very high,” she said. “Until we have a vaccine … I hate to say this, it’s bad news, but the chances of successfully containing this virus are very small.”