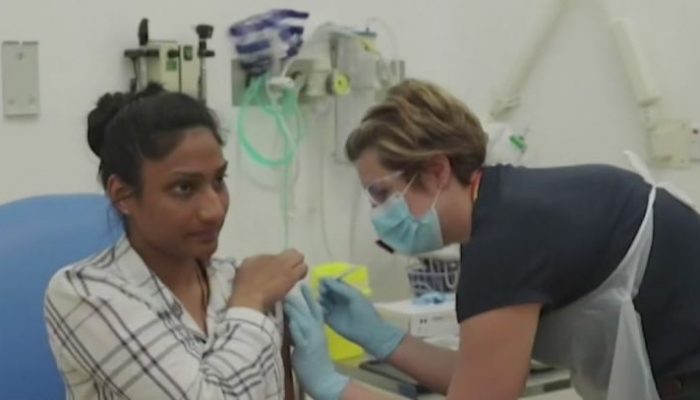 Texas A&amp;M will become the first institution in the U.S. to conduct human clinical trials on the existing BCG vaccine that could also help mitigate the effects of COVID-19

HOUSTON – Texas A&M will become the first institution in the U.S. to conduct human clinical trials on the existing BCG vaccine that could also help mitigate the effects of COVID-19. Texas A&M will begin its first set of vaccinations this Wednesday.

Other institutions taking part in the trial include Harvard, MD Anderson, Baylor and Cedars-Sinai in Los Angeles. A total of 1,800 people will be included in the study group.

Other clinical trials previously reported including Remdesivir, Hyrdroxychloroquine, and plasma transfusions; those were focused on finding a potential treatment for those who’ve already been infected with COVID-19.

This particular trial is focused on prevention and mitigation for those who’ve never been exposed to the virus.

MORE: FDA allows emergency use of remdesivir drug for coronavirus

Dr. Jeffrey Cirillo leads the Center for Airborne Pathogens Research and Imaging at Texas A&M College of Medicine.
“This is actually the only vaccine in the world that we could use tomorrow if we get today. It’s already approved by the FDA. This one, in particular, is called TICE BCG — that’s a specific type of BCG it is,” Cirillo said.

Cirillo and a group of researchers are now re-purposing a nearly century-old BCG vaccine to help fight against the most devastating effects of COVID-19, including the severity of the virus and the number of people that get infected.

The BCG vaccine is widely used around the world to prevent tuberculosis, an infectious disease that attacks the lungs.

In foreign countries, the BCG vaccine is often administered at birth, identifiable by a distinct scar on a person’s arm.

In the U.S., it’s commonly used to treat bladder cancer by strengthening a person’s immune response.

RELATED: COVID-19 testing in greater Houston area: how and where

“We know there’s this thing called immune exhaustion and immune training — it’s where we can modify the immune response,” Cirillo said.

Cirillo adds those who already have the vaccine would still need the modified booster to fight against the effects of COVID-19.

Additionally, a sub-study of the clinical trial will aim to identify whether those who report symptoms of loss of taste and smell, and hallucinations could be at higher risk for more serious issues down the line.

“That suggests that the Central Nervous System, including our brains is impacted by this. What we see is the predisposition for Alzheimer’s cognitive impairment later in life. And so I’m very much worried about some of the younger individuals that are getting infected not going to the hospital.

“Because BCG has been shown to have an impact in reducing cognitive impairment later in life, it’s important we try the vaccine in these individuals,” Cirillo said.

Ultimately, Dr Cirillo says the vaccine would buy time. The BCG vaccine has an effectiveness that could last approximately two to three years.

The trial is set to last 6 months. Because the BCG vaccine is already FDA approved, Cirillo believes it may be the fastest solution, as other researchers around the world race to develop a more specific vaccine for Covid-19 — a process could sometimes take several years.

Texas A&M will begin administering the vaccine to humans this Wednesday. If interested in the trial, click here.

Dr. Cirillo said the goal upon the completion of a successful clinical trial, is to prioritize high-risk individuals like healthcare workers and law enforcement to receive the vaccine first.

About the Author: Natalie Hee