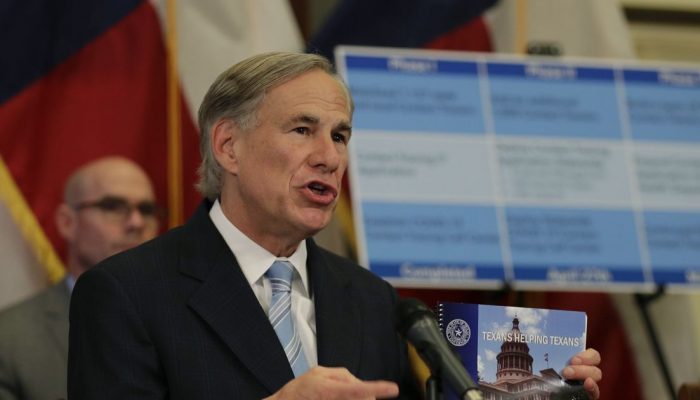 
Businesses in North Texas are close to reopening after Gov. Greg Abbott unveiled a plan to lift restrictions in the state, the first phase of which allows restaurants, movie theaters and many retailers to operate at 25% capacity.

Here are answers to some key questions about the order submitted by Dallas Morning News readers.

What happens to retail establishments deemed nonessential by previous state or local orders?

The governor’s order supersedes any conflicting order put in place by local governments. The restrictions on businesses in Dallas County’s stay-at-home order, for example, which had been extended until May 15, will now expire Thursday along with the statewide order.

What happened to Abbott’s executive order limiting gatherings to 10 people?

Abbott announced the 10-person limit on gatherings on March 19. That rule was extended through other executive orders, the latest of which expires Thursday.

While this new order doesn’t specifically mention the 10-person limit, it does say that everyone in the state should “minimize social gatherings and minimize in-person contact with people who are not in the same household” except when on essential business.

No. The governor’s order says that stores already open because they are essential businesses are not subject to the restrictions and limitations in the new executive order.

What about restrooms at essential businesses? How often will they be cleaned?

Abbott’s plan for reopening the state recommends, but does not require, that restaurants and other essential businesses “regularly and frequently” clean restrooms. The governor’s guidelines for restaurants recommend that each restroom cleaning is documented.

The Texas Alcoholic Beverage Commission confirmed on its website that restaurants may continue to sell alcoholic beverages to go as they had been doing before Abbott announced his plan to reopen the state.

“From what I hear from Texans, we may just let this keep on going forever,” Abbott said in a tweet Tuesday.

Mixed drinks, however, cannot be sold to go.

Have any museums, theaters and bookstores in Dallas decided to open?

No movie theaters or museums in Dallas have decided to open. Most are taking a wait-and-see strategy and assessing when they can reopen.

There are, however, a few drive-in theaters and at least one bookstore that have decided to reopen.

Kyle Hall, general manager at Interabang Books on West Lovers Lane in Dallas, said his store will reopen with three booksellers in the store. The store plans to admit no more than 10 people or five customer groups at a time.

Meanwhile, the Coyote Drive-In in Fort Worth and the Brazos Drive-In in Granbury will open Friday. The Galaxy Drive-In in Ennis has remained open, and requires patrons to stay inside their cars during the entire movie.

Has the rule on elective medical procedures changed?

Abbott loosened the ban on nonessential surgeries on April 17, saying hospitals can perform those procedures as long as doing so wouldn’t deplete the hospital’s supply of personal protective equipment needed to treat COVID-19 patients. That order is still in place.

Are Dallas vital statistics or Dallas passport offices reopening under the new order?

Dallas City Hall still remains closed to the public, as does the Bureau of Vital Statistics. Birth and death certificates can still be requested online.

Passport offices in Dallas and elsewhere in North Texas are providing only limited services. People with a life-or-death emergency can apply in-person for a passport through an appointment.

Does the reopening of businesses also apply to beauty supply establishments?

Under the first phase of the reopening, hair and nail salons are not allowed to open. However, an in-store retail business, such as a beauty supply store, would be allowed to open.

The current executive order lasts until May 18. If there are no new outbreaks by then, other personal-care businesses that are currently closed, like salons, gyms and massage parlors, may then be allowed to reopen.

Will furniture stores be open?

In-store retail stores that weren’t previously deemed essential are allowed to reopen under the order, so furniture stores will be allowed to open. Rooms-to-Go, for example, said on its website that it will be reopening Friday.

I have a restaurant inside a bazaar. Can I open just like any other restaurant at a 25% capacity?

Some Dallas bazaars have already announced that they will be reopening Friday, including Bargin City Bazaar in west Oak Cliff and Harry Hines Bazaar in northwest Dallas. Restaurants inside bazaars should be allowed to open under Abbott’s plan.

Anyone with questions about Abbott’s plan to reopen the state may email catherine.marfin@dallasnews.com.