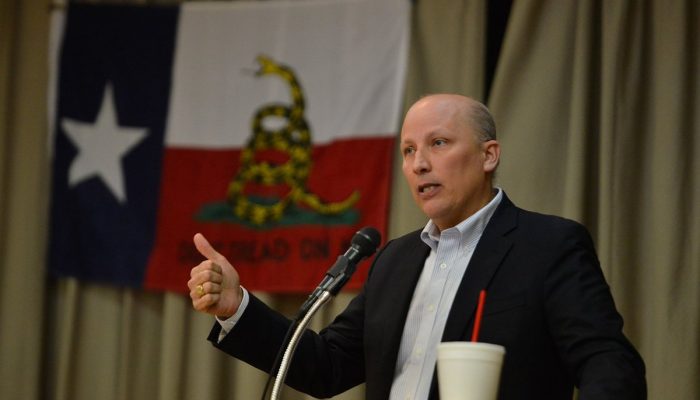 
U.S. Rep. Chip Roy, a firebrand freshman Republican, on Wednesday called for a return to economic normalcy amid the COVID-19 pandemic, in order to secure an “overall net positive outcome” for Americans.

“The goal here is for the least amount of human harm, right?” the Austin conservative said in a Wednesday interview with The Texas Tribune’s Evan Smith. “And so the virus is one piece of a much larger puzzle. So should we reopen our society? I believe yes.”

Roy argued that the American economy cannot freeze for the months or years it will take for scientists to develop a vaccine.

U.S. Rep. Chip Roy is calling for a return to economic normalcy amid the COVID-19 pandemic.

“The goal here is for the least amount of human harm, right?” He went on to say: “We need immunity systems that can fight this. We need herd immunity.” https://t.co/iKQ64P36sq pic.twitter.com/N74AA8qmsd

When pressed over whether the herd immunity concept will lead to unnecessary deaths, Roy countered that the nationwide lockdown and its subsequent delays in cancer screenings, addiction treatment and mental health ramifications from unemployment have added to indirect death and suffering.

Roy is in for what is expected to be a banner reelection race in the fall against former state Sen. Wendy Davis, a Democrat in his central Texas-based 21st District. Roy responded to criticism from Democrats over a comment he made comparing enforcement of a stay-at-home order in Maine to Nazis on The Mark Levin Show.

“What I was talking about was a Maine sheriff who, I believe, was responding to and pushing back on the Maine governor for not stay-at-home orders, but because they were enforcing people being able to be out on the highway.” he said.

“[Police] just doing stops. Routine stops. Stopping people to check them,” he added. “As opposed to being able to go through and say, ‘Hey, we’re going to have a commonsense response like the local law enforcement that here in Texas.’”

Looking forward, Roy says he is confident that the traditional in-person voting process will hold amid the pandemic, and if the election was held on Tuesday, he would eagerly vote in person.

“No question,” he said. “And elderly or people that can request ballots at home — and do so under our current laws by the way — I think they could do that and be able to sequester themselves.”

“Those that wanted to go through the line and vote could do so in an independent form and an early voting frame,” he added. “But again, we can look at ways to make that system better. I just would be a little concerned about kind of turning everything on its head mail-in ballot and so forth.”

Responding to outrage over how large corporations secured money that was intended for small businesses hit hard by the new coronavirus, Roy said Congress can potentially address the issue via tax policy.

“It was a quick program, so I think there were going to be mistakes,” Roy said. “To fix it, in the backend, I think, [we need to] find ways to make sure through tax policy nobody gets a windfall.”

“I think that’s working out to some degree,” he said of large corporations, including that of Texas hotelier Monty Bennett, who have voluntarily returned the money they secured from the federal government.

“I know some who have not gotten headlines who have chosen to return it,” Roy said.

Roy said he is encouraged that most Texans he encounters in his daily life are following social distancing guidelines, including wearing masks. As for his own habits, he said he wears his mask when he finds it appropriate — particularly “in tight quarters.”

While recently voting at the U.S. Capitol, Roy said he frequently wore his mask and opted to take the staircases rather than the small elevators around the building. But when delivering a floor speech, he removed his mask — like many other lawmakers.

“It’s important for the American people to be able to see your face,” he said. “So, when I spoke on the floor of the House, when I was down there, I didn’t wear a mask.”

About the Author: Abby Livingston