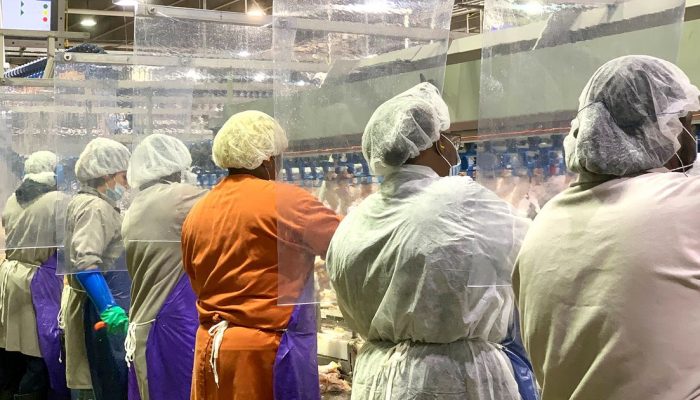 AUSTIN — Texas’ coronavirus outbreak “hotspots,” at least as much as the disease’s spread has been detected, are in rural counties.

Ranked by prevalence of confirmed cases of the virus, two of the top three Texas counties are home to huge meat processing plants: Moore County, near the top of the Panhandle; and Shelby County, along the Louisiana border.

Other rural counties showing high infection rates – much higher than in Harris and Dallas counties – aren’t scattered across the state.

They’re grouped around Moore, which is north of Amarillo and has JBS Beef’s big packing plant in Cactus; and Shelby, where a vast Tyson Foods chicken-processing facility is in Center, the county seat.

Public health experts said this week that, while our understanding of COVID-19’s prevalence is hobbled by lack of widespread testing, it’s not surprising to see outbreaks in meat-packing plants in Texas and elsewhere.

“It’s just a dirty industry,” former state epidemiologist Dennis Perrotta said of the plants that slaughter animals and prepare their meat for retailers and restaurants. “I’m surprised that we haven’t seen more cases out of there.”

Generally, rural counties with few confirmed cases of COVID-19 are expected to receive the greatest leeway for reopening some businesses at Gov. Greg Abbott’s announcement Monday of revisions to his March 31 stay-at-home order.

On Wednesday, however, Abbott said Moore County and nearby Potter and Randall counties, which include Amarillo, all have “too high of a growth rate right now” in COVID-19 cases to allow for re-openings.

“The hope is that when our open business order goes into effect that those counties will have been corralled,” he told Lubbock radio talk-show host Chad Hasty.

Moore County in the Texas Panhandle has the highest COVID-19 infection rate in the state, with a cluster of infections at a beef-processing plant in the city of Cactus, shown during a 2006 dust storm.(DEBORAH TURNER / 104112)

Four of the top 12 counties are in East Texas, clustered around Shelby, including Panola (2.99), San Augustine (1.92) and Nacogdoches (1.75). Rounding out the top 12 were Washington and Walker counties in east Central Texas.

For instance, devoting limited testing resources to a rural area with a suspected outbreak at a large factory, prison or nursing home can send its per-capita infection rate soaring, compared with the rest of the state, he said.

“Everyone else is artificially lower because they’re still not doing full access to testing,” noted Lakey, now the University of Texas System’s vice chancellor for health affairs and chief medical officer.

He pointed to Donley County, where a physician who’s the county judge started testing people early and rigorously.

“I dare say it’s widespread in other communities,” that official, Donley County Judge John Howard, told the Texas Tribune. “But they may not be testing at the rate that I’m testing.”

The Department of State Health Services sent a team, at JBS Beef’s request, to Cactus last week and is “monitoring the situation at the Tyson plant in Shelby County,” said spokeswoman Lara Anton. The JBS plant has 159 cases; the Tyson one, 56, she said. A number of the cases both places are associated with outlying counties, not Moore nor Shelby, Anton said.

A Deloitte and Data USA webtool on COVID-19 shows that both areas have low median incomes and a widespread lack of health insurance coverage.

Before the plants may have been reconfigured to encourage social distancing, they featured “people working shoulder to shoulder ripping flesh off an animal,” Perrotta said.

Slaughterhouse employees may be financially strapped and live in crowded or makeshift housing, Lakey noted.

“When you go back home, if it’s a smaller living space or there’s more people there circulating or you don’t have some of the things [needed] to make it easy to wash your hands, that local environment can be much more conducive to the spread of an infectious pathogen like COVID-19,” he said.