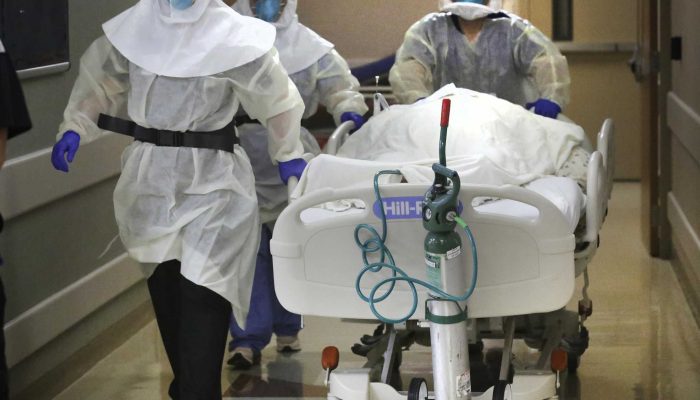 Since Memorial Day Texas has seen a 36-percent increase in hospitalizations due to COVID-19, new data released Tuesday by the Department of State Health Services show.

On Tuesday, the state reported 2,056 hospitalizations — the highest number since the pandemic first reached Texas in March. Texas Gov. Greg Abbott told KSAT viewers in San Antonio that he is watching the data carefully to guide how much more the state can continue to reopen businesses.

While hospitalizations are up, Texas is still reporting more than 15,000 hospital beds available and almost 6,000 ventilators available.

The Houston region was already showing it’s own spike in hospitalizations. COVID-19 patients have occupied hospital intensive-care units in the nine-county Houston area at higher levels the first three days in June than they did on any single day in May, according to date compiled by the Southeast Texas Regional Advisory Council, a state group that coordinates the region’s emergency response to disasters.

In Harris County, hospital admissions have increased at statistically significant levels the past two weeks.

Abbott has been allowing businesses to reopen since May 1, when he first announced retail stores, restaurants, malls and movie theaters could reopen to 25 percent capacity. He later allowed those types of businesses to go to 50 percent. And last week, Abbott announced that essentially all businesses in Texas can now operate at 50 percent of their maximum occupancy, including bars, amusement parks and carnivals where there have been less than 1,000 cases of COVID-19.

On Friday, under Abbott’s reopening plan, all restaurants will be allowed to move to 75 percent capacity. And starting next Friday carnivals and amusement parks in all counties can reopen to 50 percent capacity.

COVID-19 data compiled by the Hearst Newspapers data team shows statewide, Texas saw its number of positive cases of the virus climb from 75,582 to 76,779 on Monday — an increase of 1,197 cases.

On Monday, New York Gov. Andrew Cuomo, a Democrat, pointed to the rising hospitalizations and COVID-19 cases in Texas as a warning to New Yorkers as that state begins to reopen its economy. Cuomo said New Yorkers have to continue to be smart with social distancing to avoid spikes like those in Arizona, Texas and Florida.

While Abbott has pushed aggressively to reopen the Texas economy, he has warned that the pandemic hasn’t ended.

“COVID-19 hasn’t suddenly left the state of Texas or the United States,” Abbott said last week. “We need to continue these self-distancing practices as we await the arrival of medications that will treat people who test positive for COVID-19.”

On Monday, Abbott announced he was expanding testing in underserved and minority communities that have been disproportionately impacted by the virus.

“We must address the disproportionate impact of COVID-19 on underserved and minority communities and ensure that anyone who needs a test can have one,” Abbott said. “As many Texans continue to gather for protests, the state is also taking steps to address potential surges in COVID-19 cases.”

About the Author: Jeremy Wallace