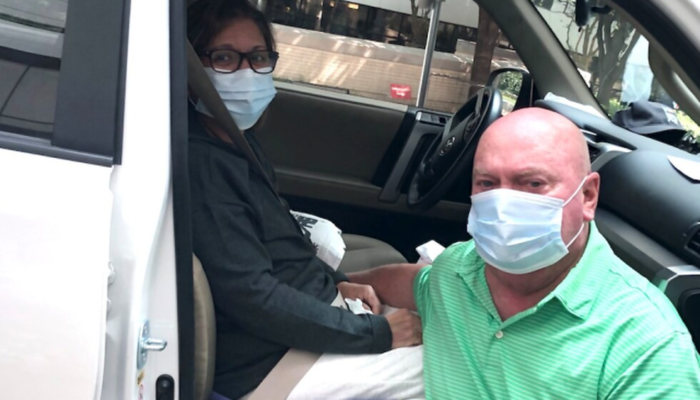 
DALLAS (CBSDFW.COM) – Some COVID-19 patients on the brink of death are recovering because of a machine and a team of doctors at Baylor Scott & White Medical Center Dallas who, along with a patient, are sharing a remarkable story of survival.

Sixty-four-year-old Mary Mariner had less than a 10% chance of survival is not only alive, she’s back to normal, according to her doctors.

It’s because of a treatment that not every hospital has.

But Mariner’s daughter thankfully knew about it which helped save her mother’s life.

Doctors said Mariner had little chance of survival after contracting COVID-19 in August and the virus attacked her heart.

She was in a hospital in San Antonio where her family says they were told she likely wasn’t going to make it.

“We thought there was a very good chance we were going to lose her that was the darkest moment,” said husband, Larry Mariner.

Mary’s daughter, Stacy, is a nurse and had heard about the success of ECMO machines.

Extracorporeal membrane oxygenation can take blood out of the body and put oxygen into it.

Baylor Scott & White Dallas has 12 ECMO machines that have been used to treat patients who are beyond the help of a ventilator and on the brink of death.

Stacy called Baylor, which flew a medical helicopter to pick up her mother and fly her to Dallas for ECMO treatment.

“I’m very lucky I was able to do that for my family,” said Stacy.

After only four days, Mariner’s heart recovered and soon she was back home with her family and healthy.

Unfortunately, not every hospital has the resources to use ECMO technology.

But Baylor says three quarters of the 50 patients it’s treated with it have survived.

The Mariner and her doctor, Dr. Gary Schwartz, had an emotional online video reunion on Friday, Dec. 4.

“I had one chance to survive and without Dr. Schwartz and his team I wouldn’t be here,” Mariner said. “I was so lucky that they were there for me and I totally appreciate him and he’s just a person in my life that I will never forget. Dr. Schwartz thank you from the bottom of my heart.”

Baylor says it’s getting calls every day from hospitals asking for ECMO teams to come and get their patients and bring them to Dallas.

Doctors there say they are accommodating as many as they can, but unfortunately the number of critically ill COVID-19 patients is just too high to accept all of them.