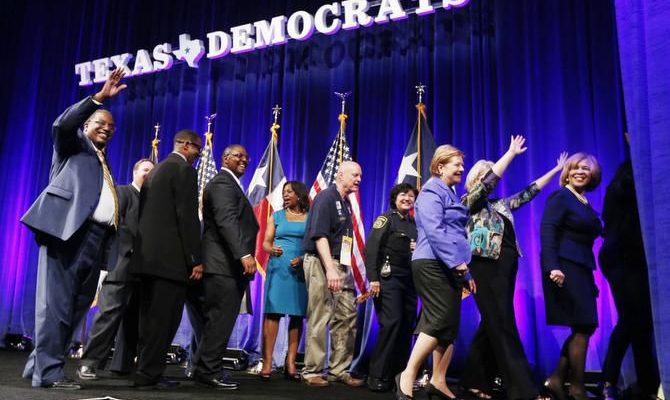 About $1.5 million of that money came from grassroots donations, the party said. The remainder came in corporate sponsorships.

The haul has energized Democrats about their chances in the November elections. After COVID-19 forced the party into a virtual convention, some questioned whether a digital event could create the same energy as an in-person convention with thousands of supporters.

Luke Warford, the party’s voter expansion director who led the fundraising efforts, said the record numbers wiped away those concerns.

“Texas Democrats have known for a long time that Texas was the biggest battleground state in the country,” he said. “This was the week that everyone else woke up to that.”

For comparison, Warford said, the party netted only $18,000 off their fundraising efforts at the 2018 state convention. In that cycle – in which the Democrats picked up 12 seats in the Texas House and 2 in the Senate – the party raised $2 million for the entire cycle.

“That’s in the best cycle in the last three decades for Democrats in Texas,” Warford said. “We out-raised that in one week. We’re still in shock a little.”

In the realm of campaign finance, $2 million may not seem like much — the equivalent of one expensive statehouse seat race. But Warford said it’s noteworthy because that money went straight to the party, which plans to use some of the proceeds for voter registration efforts.

“If you imagine you’re a Democratic donor, when you think about who you’ll donate to, people donate to candidates,” he said. “No one donates to the Democratic Party, despite the fact that we’re building infrastructure for long term. Nobody. That’s not what people do. They donate to candidates. We got 40,000 donors in a week as a state party. That is truly remarkable.”

The average donation was $34.

Warford said he saw the momentum almost immediately. On Monday, the party broke its single day record for online fundraising with $50,000. Two days later, they broke their monthly fundraising record with $180,000 in one day.

On Friday, the party upped that to $283,000 and a day later it received half a million dollars.

“What we pulled off this week was totally unprecedented from a fundraising perspective,” Warford said.

Money wasn’t the only measure of success, he said. The party also trained 3,400 deputy voter registrars and got more than 100,000 viewers on their virtual convention on multiple days.

Throughout the week, Hollywood celebrities like George Takei, Debra Messing and Mark Hamill lent the virtual attention some added publicity by tweeting that winning Texas would lead to losing Trump. Several celebrities posted similar tweets and asked for a $38 donation to represent the state’s 38 electoral votes.

Warford said the party knew there could be some celebrity attention. Piper Perabo, of Coyote Ugly and Covert Affairs fame, and Ben McKenzie who starred in The O.C. and Gotham are both Texans who the party had interacted with. But once the initial posts got on social media, they snowballed.

“People get excited about something and then they tell their friends and it really takes off,” Warford said. “In this case, the people who were organizing happened to be people with huge followings on social media. They were excited and the message was simple and clear and believable.”

The convention also had more than 100,000 viewers online on several days compared to the approximately 10,000 people who would attend an in-person convention.

In a year in which the Democrats are pushing to win the Texas House, Warford said, their “coming out party” still went off without a hitch.

“Of course, it’s unprecedented. This was the first time doing something like this. We don’t have anything to look at,” Warford said. “Our party had demonstrated time and again that we can adapt and thrive in adverse environments… It’s impossible to say what the in-person convention would have been like. [But] it went about as well as we could have imagined.”

Of course, the Democrats missed out on the momentum of having the party’s presumptive presidential nominee Joe Biden live at their state convention. And the appearances of U.S. House Speaker Nancy Pelosi and Sen. Kamala Harris in-person may have drummed up more energy, but Rahman said he expects Biden to return to Texas during the campaign.

Democrats said the success at their convention sends a message to Republicans.