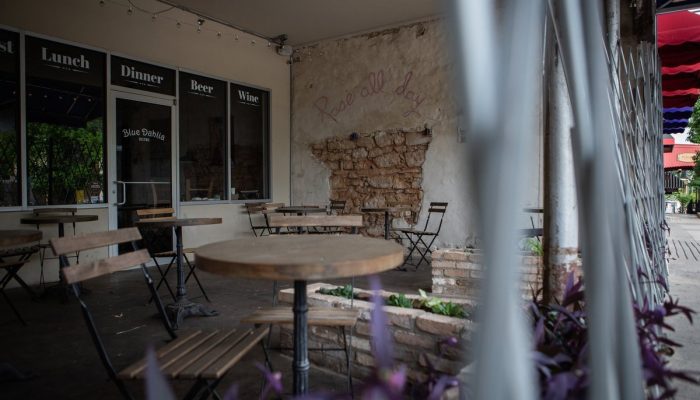 That being said, Jordan, 45, of Willow Park, said she won’t be “running to the restaurants to try and have a sit-down meal” as select businesses reopen Friday during the ongoing coronavirus pandemic.

The impact on Texas’ economy

The coronavirus pandemic has steered the economy into the path of a recession. Here’s the latest.

Restaurants, retail stores, malls and movie theaters can start serving customers Friday as part of Gov. Greg Abbott’s first phase of slowly reopening the economy. Many Texans are eager for economic activity to return as more than 1.5 million people across the state have filed for unemployment in the past six weeks.

But financial woes and public health concerns — results of the pandemic’s twin crises — are expected to prompt many consumers to stay home even though they’re allowed to return to some of their favorite restaurants and stores. Friday’s economic reopening will come a day after Texas recorded 50 deaths from the new coronavirus, the highest one-day total since the pandemic began. The state also reported 1,033 new cases Thursday — the third-highest increase since the state began reporting coronavirus case counts.

“There’s no indication from any critical source that this will be like flipping on a lightbulb.”

Despite a widespread sense that people are “keen to return to some sense of normalcy,” Scott Benedict, director of the Center for Retailing Studies at Texas A&M’s Mays Business School, said it will be a while before consumers feel comfortable returning to business as usual.

“There’s no indication from any critical source that this will be like flipping on a lightbulb,” Benedict said. “I don’t think consumers will have that supreme sense that their personal health will be protected.”

Savaana De La Fuente said she’s been self-isolating with her family since mid-January. Any money coming in — whether it’s a check from the stimulus bill or her fiance’s unemployment benefits — is going toward paying bills, she said. She doesn’t have money to spend on entertainment, De La Fuente said, and she doesn’t plan on returning to restaurants and retail stores, either.

“Just hearing how it spreads, and you don’t know it’s spreading until after the 14 days, that’s what really makes me feel more cautious,” De La Fuente said. “Deep down, I am scared, and fear is kind of what keeps me from going out, but as a parent, I don’t want to appear scared.”

Abbott has received mixed reviews for allowing more businesses to open. Some public health experts praised Abbott for phasing in an economic reopening instead of allowing everything to open all at once. But some health officials said it was too soon to relax social distancing precautions that have helped keep the coronavirus outbreak manageable in Texas.

Two-thirds of registered Texas voters agree with decisions by Abbott and several local officials to suspend nonessential business operations, according to a recent University of Texas/Texas Tribune Poll. And more than three quarters of voters support orders to stay home except for essential activities. The survey was conducted April 10-19, before Abbott disclosed plans for reopening the economy.

Still, some in Abbott’s own party want him to speed up the reopening process. His political standing remains solid as he navigates the pandemic, according to the recent poll, which found that 56% of Texas voters approve of his coronavirus response while 29% disapprove.

Businesses opening Friday are only permitted to operate at 25% capacity to ensure proper social distancing is maintained. But Emily Williams Knight, president and CEO of the Texas Restaurant Association, said this is “not a sustainable business model” for many eateries.

“For some of our smaller independents with limited seating, this may not be feasible,” Williams Knight said. “All restaurants are not created equal as far as ability to generate revenue.”

About half of restaurants in the association are choosing to remain closed for various reasons, Williams Knight said. Some need more time to properly follow health guidelines, stand by for a sufficient supply chain to come online or wait for employees to feel safe returning to public-facing jobs.

The Texas Retailers Association said it does not have polling data on how many of its stores will be open Friday.

Williams Knight said she’s not concerned about customers returning to restaurants because “there’s a lot of demand” from people who miss going out to eat.

“For some of our smaller independents with limited seating, this may not be feasible. All restaurants are not created equal as far as ability to generate revenue.”

Teri Sutterfield plans on heading to Mamacita’s in Kerrville this weekend to enjoy some fresh Mexican food. She said she’s “completely comfortable” returning to restaurants and businesses.

“We have a responsibility to the community to support businesses, to get back out there,” Sutterfield said. “I do feel very strongly that we can do that safely and still protect our community.”

The furniture store where Sutterfield works is opening Friday, she said, and the store is making accommodations to keep customers and workers safe.

But with more than a million Texans unemployed because of the new coronavirus, people’s disposable income for spending on things like shopping and eating out will be lower.

Benedict, from A&M’s retailing studies center, said there are enough people who have lost their income that it will affect spending habits. But retailers that provide essential purchases, the “very basic necessities of life,” will likely recover much more quickly, Benedict said.

Barbara Stewart, a retailing and consumer sciences professor at the University of Houston, said customers are balancing “caution and pent-up desire.” While she said she doesn’t expect a “huge rush” of shoppers and restaurant-goers in the first few days of reopening, Stewart said that “consumers will return.”

“Consumers shop for lots of different reasons that have little to do with buying goods or eating,” Stewart said. “It’s diversion, physical activity, sensory stimulation, an experience outside the home, an opportunity to communicate with others.”

Retail is always in a state of change, Stewart said, including making a more robust online shopping experience. But brick-and-mortar stores still make up the bulk of retail revenue, she added.

Christie Neale, a 49-year-old from Fort Worth, said she has “too much anxiety” about returning to restaurants and stores. She said she’s “terrified” that there will be a spike in cases that will lead to another total shutdown of the economy, bringing Texas “back to square one.”

As a contemporary artist, Neale said she’s “suffered a great deal” financially with so many arts festivals closed. But for now, Neale said she isn’t comfortable going out right away.

“I haven’t seen my mother in like six weeks,” Neale said. “Mother’s Day is coming up. If I go out and expose myself to hundreds of people, I’m not going to be able to see her on Mother’s Day.”

Disclosure: Texas A&M University, the Texas Retailers Association, the University of Houston and the University of Texas at Austin have been financial supporters of The Texas Tribune, a nonprofit, nonpartisan news organization that is funded in part by donations from members, foundations and corporate sponsors. Financial supporters play no role in the Tribune’s journalism. Find a complete list of them here.

About the Author: Clare Proctor