Home TexasCovidNews Texas excludes retail, restaurant workers from daycare help even as the number of child care operators falls by 40% 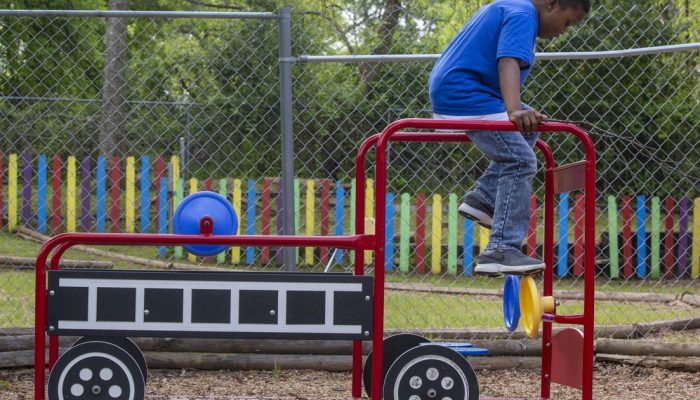 Over the next month, as large segments of the Texas economy slowly re-open, parents rejoining the workforce will have to find child care options.

Schools, closed by an executive order by Gov. Greg Abbott on April 17, won’t reopen for the remainder of the 2019-2020 school year, so parents will be asked to find their own child care in order to get back on the job.

There’s a catch, though. Many workers in retail and restaurants won’t be able to enroll their children in state-licensed child care centers, at least not yet.

Those child care centers are currently available only for children of essential workers, like nurses, truck drivers, and grocery store stockers.

Non-essential workers, such as clothing store clerks and bartenders, won’t get that access. And statewide, the number of child care operations has declined by 40 percent since before the pandemic began.

“I don’t know how a lot of our families are doing it,” said Dallas ISD superintendent Michael Hinojosa. “My guess is that there’s a lot of big sisters and big brothers watching their siblings — other family members and friends, too.”

When Abbott announced his plan to not extend the state’s stay-at-home order on Monday, he said that state officials “realize that an important part of reopening is access to child care.”

Abbott said during his news conference that there were over 120,000 childcare spots available to essential workers across the state, and the state’s goal “is to find ways to expand those resources and make them available, in a safe way, to more workers across the entire state.”

“We know how important this issue is to working families, and we’re giving it the speedy attention that it deserves,” he said.

To that end, the state has created a website, frontlinechildcare.texas.gov, to help connect essential workers with child care vacancies, and raised the income limits to allow those workers more access to childcare subsidies.

Those benefits, however, don’t extend to the new group of employees heading back into the workforce, many of whom aren’t considered essential workers.

All the while, many child care centers are struggling to stay afloat. In the past month, nearly 3,000 childcare operations have shut their doors, according to figures from the Texas Department of Health and Human Services.

Abbott’s new order, according to Texas Workforce Commission spokesperson Cisco Gamez, “does not change the requirement that a parent must certify that they work for an ‘essential’ industry in order to be eligible to access child care.”

“Just because a business is now open does not necessarily mean that it is considered ‘essential’,” Gamez said in a statement.

For nonessential workers or those who are currently unemployed, Gamez said that the state’s website points parents to a handful of in-home nannies, babysitting and childcare placement services, including the online giant Care.com.

When the threat of coronavirus shuttered her daughter’s kindergarten and pre-K programs, Jacqueline Carcamo left her job at a warehouse in Garland to take care of her two children.

Carcamo, 30, had a little money set aside from her income tax refund, and thought that the school’s closure would be a short-term challenge. That’s not been the case.

Over a month later, Carcamo — a member of Workers Defense, a nonprofit group advocating for workers’ rights — is looking for a new job but knows that her lack of steady childcare could make things tough. Recently, her mom watched her kids while she went out to look for work, but that solution is not always available.

Through an interpreter, Carcamo said she’s not looking for full-time daycare at this point, but is instead looking for someone in her circle who could watch her children. There aren’t many takers, though, given the concerns surrounding the coronavirus, she said.

“It’s very difficult” to find a job right now, and she’s worried that she’ll expose her children to the coronavirus by leaving her home to look for a job. But Carcamo said that she’ll soon be out of money, and she worries that she might have to go deep into debt if she can’t find a job soon.

Several local community nonprofits and childcare centers say they are ready to shoulder a larger burden, in part because they’ve largely stayed open, at least in a scaled-down manner. Many operators have also pivoted to allow for school-aged children to attend all day.

Jessica Hiatt White, the director of First United Methodist-Plano’s childcare program, said she was surprised to learn that Abbott’s new order didn’t widen the group of families she could serve. Her program has limited availability for toddlers and pre-K students right now, she said, but has several spots still open for school-aged children. While First United Methodist Plano is on the state’s website, White hasn’t received a referral from it yet, she said.

White’s program has stayed open throughout the coronavirus crisis. “We’ve been blessed to not have any of those [COVID-19] touchpoints,” she said.

In recent weeks, it has pivoted to add full-time care for school-aged students. Prior to school closures, the church’s Weekday program provided after-school care for 40 elementary and middle-school students, in addition to its preschool, kindergarten and children’s day out programs.

“In the past we’ve offered after-school care for three different ISDs, but we’re not staffed for full day care for schoolers,” White said. “This is totally different; they have homework.”

The YMCA of Metropolitan Dallas changed its childcare programs, turning its after-school efforts — which served 3,800 children at 92 different sites — into full-time childcare for essential workers.

“We knew childcare was a need, particularly for our first responders and those emergency room workers, who are still out there, on duty, and don’t get to turn it off and turn it on,” said CEO Curt Hazelbaker.

Originally, the YMCA opened 11 locations throughout the region for emergency child care, but has lowered that number to six — Coppell, Grand Prairie, McKinney, Plano, Richardson, and downtown’s T. Boone Pickens location — because of lack of demand. Two weeks ago, it opened a seventh location, at Dallas ISD’s Cesar Chavez Learning Center, in a joint partnership with DISD.

At this point, demand is low; while the sites could take anywhere from 40 to 50 kids, the YMCA is serving around 75 to 85 children combined over its six sites, Hazelbaker said.

If more parents need childcare, the YMCA could easily open another location, he said.

“We’ve got capacity,” Hazelbaker said. “If the government will let us take more kids, we’ll take those kids.”