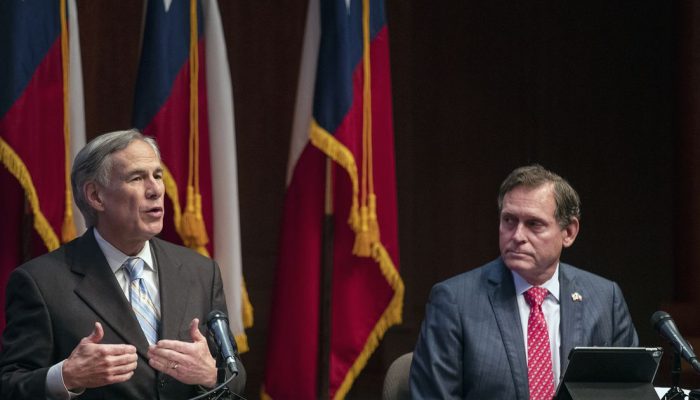 “Restoring livelihoods” is important but must be done safely, he said.

As layoffs mount and businesses teeter, many Texans are eager for some relaxation of orders requiring isolation and staying physically apart as much as possible, Abbott conceded.

“I know they want to get back into the workforce,” he said. “But we have to articulate also the strategies about ways we can do this safely. And that’s one thing we’ll be doing next week.”

Showing characteristic deliberation — some would say caution – Abbott declined to directly rebut Lt. Gov. Dan Patrick’s comment earlier in the day about how, ideally, some businesses might reopen in early May.

But he put some distance between himself and Patrick, who for weeks has said on Fox News and elsewhere that Americans can’t — and shouldn’t have to — tolerate an indefinite shutdown of business.

.@DanPatrick on @TexasGOP call eyes early May to start phasing back in Texas economy: “We’re not gonna open up everything immediately, but it will be done in phases, but we need to get started, & I hope that’s the first week of May, barring any unforeseen big spikes” #coronavirus

At a news conference at the Texas Capitol, Abbott said he’ll be closely watching for guidance from President Donald Trump and the White House on “economic revitalization,” which he expects soon.

Next week, Abbott said, he’ll issue an executive order “talking about what will be done in Texas about reopening Texas businesses.”

“We will focus on protecting lives while restoring livelihoods,” he said. “We can and we must do this. We can do both.”

Releasing a series of charts about how many Texans in some of the most populated counties are contracting COVID-19, how many are hospitalized and how many die, Abbott and his top medical experts expressed cautious optimism.

“We’re beginning to slow the growth of the coronavirus,” Abbott said. “We’ve not yet reached the peak and begun the decline yet.”

Abbott said infection rates in El Paso and Laredo are troubling, and he is not satisfied with Tarrant County’s trend. Still, most other urban counties are showing signs of leveling off, he said.

The University of Texas System’s health sciences chancellor, John Zerwas, who is Abbott’s hospital-bed czar during the crisis, said the urban-county data show that the state’s efforts to curb the spread are having a “profound impact.”

Abbott called the trend a “mathematical sign of success.”

Both emphasized how for the week of March 18-25, the number of cases statewide was doubling, on average, every three days. In the 7-day period that ended Thursday, cases were mounting at a slower rate – where it would take an average of 6.3 days for them to double.

Heaping praise on direct-care workers in the health care industry, Abbott said that in their honor, the dome of the Capitol will be lit blue Saturday night.

Also Friday, Abbott announced the launch of a new Frontline Child Care Website to help essential workers locate child care and support child care centers that are caring for such workers’ children during the outbreak.

Going into the Easter weekend, Gov. Greg Abbott expressed optimism about coronavirus, though he said he doubts cases have peaked in Texas. The state’s death toll is lower than many other states, he noted.(Ricardo B. Brazziell)

Parents can use the online tool to look at the 3,298 providers that are open in 153 counties, check on seats available and click to read about the state inspection and compliance records for each operation, Abbott said.

“I want to thank child care workers across the state for stepping up to support our essential workers during these challenging times,” he said.

When a reporter invited Abbott to clarify his position on golf courses, he noted they were not exempt from what amounts to a statewide stay-at-home order. They’re not among businesses and functions listed as an essential service, he said. But he acknowledged his edict also encouraged people to exercise to maintain their health.

“The employment operation” at golf courses “has to be closed,” to avoid attracting gatherings that increase risk of transmission of the virus, he said.

Abbott also was asked about whether a lack of widespread testing is a hindrance to discussing what’s happening in the state and when businesses should reopen. He said “testing will be a component” of his executive order about the economy next week. He did not elaborate. He noted some national private lab firms are increasing their volume of tests.

Asked about what the state might do to expand health insurance to more Texans, especially for people losing jobs that had coverage, Abbott stressed that the federal government is paying for testing and treatment of COVID-19 patients, “regardless of insurance status.”

The goal is to get people re-employed, in hopes they’ll get employer-provided coverage, he said.

Texas declined to expand Medicaid to cover low-income adults of working age who don’t have children, as encouraged by the Affordable Care Act of 2010.