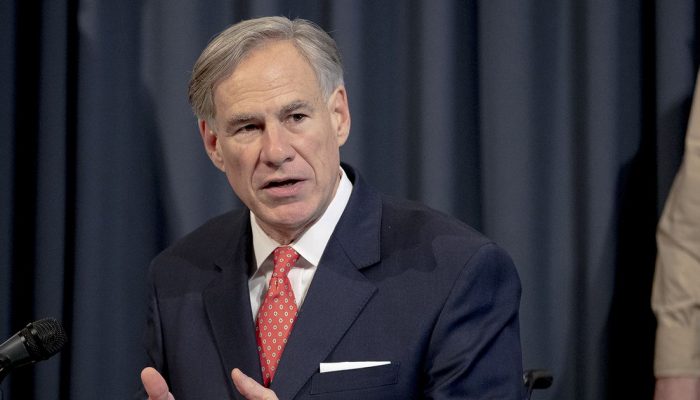 This is a developing story

AUSTIN — Gov. Greg Abbott on Friday lifted some earlier restrictions he put on Texans, while urging them to continue to take precautions to minimize spread of the novel coronavirus.

A day after President Donald Trump outlined procedures he said states should follow, Abbott said public schools should remain closed for the rest of the academic year.

But he said retailers may begin providing “to go” service to consumers starting April 24.

Bowing to pressures from doctors and hospitals, Abbott also eased a ban on elective medical procedures. Starting Wednesday, current restrictions on surgery will be loosened, he said. He cited biopsies for cancer as one example.

He also said state parks would reopen on Monday. Visitors, though, will have to wear masks or face coverings and keep at least six feet away from other visitors who aren’t members of their families.

Abbott also named a “statewide strike force” to advise him on how to conduct a phased reopening of the state economy.

“We have demonstrated we can corral the coronavirus,” Abbott said. But he cautioned, “In opening Texas, we must be guided by data and by doctors.”

On Thursday, Trump issued recommendations for governors to follow that include three phases of reopening, but also “gates” that should precede each – including a downward trend over 14 days of either documented cases of COVID-19 or positive tests as a percentage of total tests administered.

As of Friday, 414 Texans had died because of the virus.

“Deaths, while far too high, will not come close to the early dire predictions,” Abbott noted.

The number of newly reported cases in Texas continue to spike and dip each day, but have yet not shown a continued downward trend. Over 960 new positive tests were reported on Thursday, up from the 800 reported a day earlier, according to state data.

Not quite 160,000 Texans have been tested — just more than half of 1% of the state’s population of 28.9 million people. Texas has the lowest rate of coronavirus testing per capita in the country, research shows.

Asked if reopening as he proposes will be safely handled, with such as low rate of testing, Abbott replied, “It will be going up quite a bit.”

Public health officials have warned that pulling back on restrictions too soon could prompt another wave of infections.

In California, Gov. Gavin Newsom outlined plans earlier this week to reopen the economy that could involve temperature checks at restaurants and staggered start times at school. But the Democratic governor said a number of conditions would have to be met before a loosening of the state’s stay-at-home order, including at least two weeks of declining hospitalizations, expanded testing and more personal protective equipment for health care workers.

On April 27, Abbott will announce “additional ways to open Texas up,” he said. He did not elaborate.

He did say they will include phased-in strategies that maintain safety by requiring “comprehensive testing” and assurances that hospitals have beds, staff and equipment to handle any surge in infections.

Trump’s move in effect put on the governors the burden of balancing public health against desires to return to work and a sense of normalcy.

Polls show Abbott, who usually takes care not to alienate his party’s social conservatives and tea-party activists, to be Texas’ most popular Republican statewide officeholder.

In recent days, though, some movement conservatives have grown agitated. They criticized Abbott for locking down the state too tightly — or at least, failing to rein in or confront Democrats such as Dallas County Judge Clay Jenkins and Harris County Judge Lina Hidalgo as they issued orders to stay at home and wear masks.

On Thursday, a small group of people protesting Abbott’s COVID-19 orders gathered outside the Executive Mansion in Austin.

In his Friday executive order easing his earlier ban on elective medical procedures, though, Abbott delivered social conservatives a victory: He did not specify that abortions could resume. Recently, Attorney General Ken Paxton has fought a legal battle with abortion clinics, arguing Abbott’s postponement of elective medical procedures should apply to abortions as well.

Asked whether his order on elective surgery will ease restrictions on abortions, Abbott replied, “Ultimately that will be a decision for courts to make.” Pressed further, he acknowledged, “That is not part of this order.”

The strike force will have a 39-member Special Advisory Council, Abbott announced.