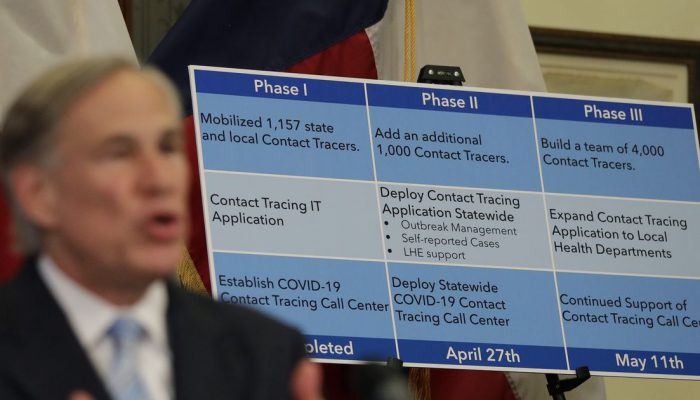 
AUSTIN — Gov. Greg Abbott on Tuesday said Dallas County residents should not worry that he’s opened the economy too soon, even as the number of positive COVID-19 cases saw a dramatic one-day increase.

Abbott said that the statewide rate of positive results on COVID-19 tests earlier in April was more than 10%. That number has been reduced to 9%, Abbott said during an interview on KXAS (NBC 5) in North Texas.

He added that on April 10, Texas had more than 1,000 people test positive, the high watermark for the state.

“But we will proceed forward now by looking at metrics so [we’re] making sure that Dallas County and the entire state of Texas is in a safe condition,” Abbott said.

Some Panhandle and East Texas counties have seen spikes of coronavirus cases, he noted.

Abbott appeared on four evening TV newscasts in four different Texas markets a day after he announced his stay-at-home order will expire as scheduled on Thursday. He said many businesses up to now considered nonessential during the pandemic would be allowed to reopen Friday — at 25% of their capacity.

In every interview, Abbott stressed that Texas has the hospital capacity to handle residents who might become ill with the virus.

“In Texas, we have one of the lowest hospitalization rates of all the states in the U.S., and we have something like the third- or fourth-lowest death rate,” he said. “We are not suffering the consequences that … New York, California, Louisiana, New Jersey, Michigan, Illinois, etc., have dealt with.”

“It’s our deadliest day and our most active day of new cases,” Jenkins said during a news conference.

Abbott continued to try to prepare Texans for an increased number of confirmed cases, saying it was inevitable if the volume of testing increases as he expects. He urged them to focus instead on hospitalization and death rates.

The governor said that it wouldn’t be logical to allow local jurisdictions to determine when to reopen their economies or lift stay-at-home orders.

“Listen, we cannot have a hodgepodge of 254 different set of rules, which of course we have 254 counties,” he told NBC5. “We as a state must begin to take steps forward.”

“The fact is deaths are declining in the Dallas area,” he said. “Tests will continue to be made, and we will be able to control the coronavirus as we very slowly, very safely begin to reopen our economy.”

At times, the governor grew defensive. On KVUE-TV in Austin, he blasted the University of Washington Institute for Health Metrics and Evaluation’s models as “way wrong.”

“They’re the same ones who said that Texas was going to max out in in late April, or early May, with like 250 or 500 deaths per day something like that,” he said of the institute. “And they had all these outrageous numbers in there, and they had to consistently, go back and recorrect their models.”

Abbott said he has “four great doctors” on his strike force, and they have approved his plan.

While the institute’s predicted strains on Texas’ hospital system never happened, Abbott said, Texans who have medical conditions other than COVID-19 are suffering.

“And that’s why we need these nurses and doctors to get back to treating cancer, treating heart disease, to treating our patients with challenges they really have,” he said. “We’re losing people who may be having their life taken from them, not because of COVID-19, but because of other health issues.”

Still, Abbott said he’s not forcing anyone who feels it’s unsafe to leave their homes.

In a video he posted on his Facebook page Tuesday, Keough criticized Abbott for letting doctors and dentists reopen their offices but not other Texas business owners.

“Picking winners and losers” is unfair, said Keough, a former Texas House member. And besides, Abbott’s order doesn’t specifically forbid them from reopening — and can’t be enforced, he said.

Asked on KBTX-TV in Bryan about Keough’s remarks, Abbott called him “a good friend” and said he went back to look at his order and agrees there’s some ambiguity.

While that will be cleared up within “the next 24 hours,” Abbott said, he’s not ready to give the personal-care businesses a green light.

The risk of spread of the virus “would be too high for certain types of businesses, including hair and nail salons, including bars and gyms and tattoo parlors and piercing parlors,” Abbott said. “And so at this time, based upon the advice of doctors, we will not be able to open those up.”

He repeated his Monday vow, though, that the state will keep looking for solutions that might allow those businesses to reopen safely.

Asked by KVUE’s Ashley Goudeau whether he plans to go to a restaurant or movie theater on Friday, Abbott replied, “Tell you what, it’s, uh, it’s not on my list yet. I’m going to talk to my wife about it and see if we can. I don’t know if we’d be able to get in. We’ll see what the crowds look like.” 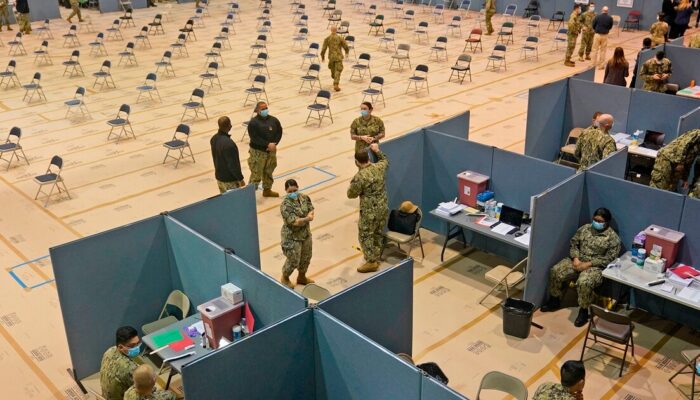 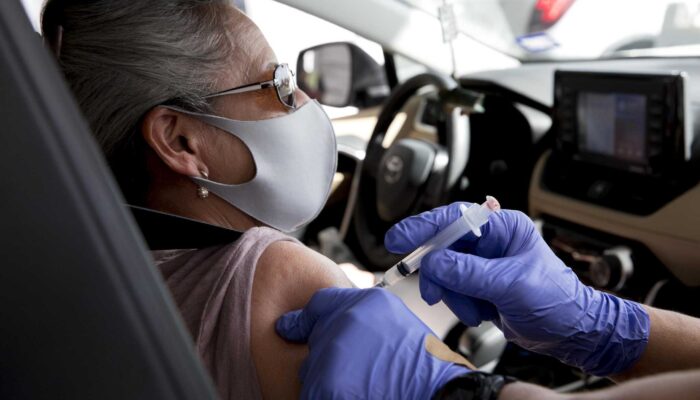