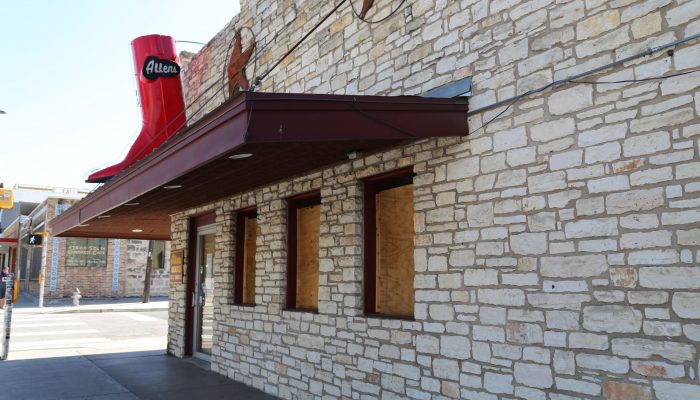 
A boot shop in Austin, Texas, is closed for business during the Covid-19 pandemic. (Courthouse News photo/Kelsey Jukam)

(CN) — Texas Governor Greg Abbott Tuesday announced that hair salons, gyms and other businesses would soon be allowed to reopen, and recent statements by the governor indicate he is well aware that such a move is likely to accelerate the spread of Covid-19.

“Listen, the fact of the matter is: pretty much every scientific and medical report shows that whenever you have a reopening — whether you want to call it a reopening of business or just a reopening of society — in the aftermath of something like this, that it actually will lead to an increase in spread,” Abbott told legislators during a private call Friday.

The leaked audio of the call, posted to YouTube Tuesday by the left-leaning nonprofit Progress Texas, was supplied by a legislator’s chief of staff to the Texas Democractic Party, a spokesperson told the San Antonio Current.

“It’s almost ipso facto. The more that you have people out there, the greater the possibility there is for transmission,” Abbott said during the call.

Abbott has previously acknowledged in interviews that reopening could lead to a jump in cases and has also said Texas would see more positive results due to the rising number of tests administered. He previously promised 25,000 tests daily by mid-May.

Despite the risks of reopening, Abbott permitted malls, movie theaters, retail stores, restaurants, museums and libraries in the state to begin operating at 25% capacity Friday.

His announcement Tuesday that hair, nail and tanning salons could resume operations on May 8 came unexpectedly early — he had previously indicated that the second phase of the state’s reopening would not begin until May 18.

Abbott has faced some pressure by members of his party to relax restrictions faster. Hours before the governor issued his executive order Tuesday, Republican state representatives Briscoe Cain, R-The Woodlands, and Steve Toth, R-Deer Park, defied current restrictions and got haircuts at a barbershop in the greater Houston area.

The governor’s order also notes that swimming pools may open Friday, and that gyms, office and manufacturing services could operate at 25% capacity beginning May 18.

According to the state’s health department, Texas had administered 427,210 total tests, and reported 33,369 cases of Covid-19 and 906 fatalities as of Tuesday.

Researchers at the University of Texas at Austin’s Covid-19 Modeling Consortium predict that daily deaths in Texas will likely decrease through May and claim there is 74% probability that the state has already passed its peak — the day when the average daily death rate is predicted to stop increasing and start decreasing.

Their models do not account for the reopening of business and slackening social distancing restrictions, or the possibility of a second wave of cases.

During his announcement Tuesday, Abbott was optimistic about the state’s number of Covid-19 cases.

During the Friday call, Abbott conveyed a fatalistic attitude about infection rates to Texas lawmakers.

“Gov. Abbott is trying to normalize an increase in cases to make people think the illnesses and deaths are not surprising,” Smith wrote in a statement.

The Texas Democratic Party also pushed back on the governor’s latest reopening announcement.

“Republicans like Greg Abbott are not here to protect your family. All they care about is making sure their billionaire donors’ interests are protected,” Garcia wrote. “Governor Abbott said that he would reevaluate opening Texas up but after four straight days with over 1000 new cases and some of the highest death totals since the crisis began, Abbott decided to throw data and science out the window and continue to fight for his lobbyists and billionaire donors.”

About the Author: DANIEL CONRAD