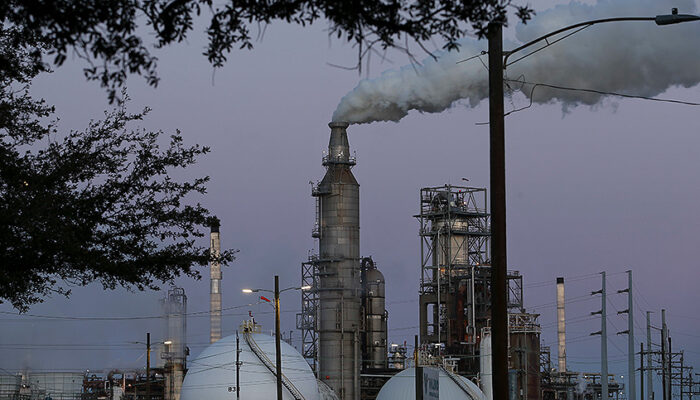 As temperatures plunged below freezing and much of Texas’ power grid collapsed last week, Ana Parras braved the pitch-black night to check on friends in the southeast Houston neighborhood of Manchester.

The majority-Latino, low-income community sits along the Houston Ship Channel, bordered by a major oil refinery and several petrochemical plants.

“The whole community was in the dark, there were no streetlights. Nothing. It was dangerous,” said Parras, co-executive director of Texas Environmental Justice Advocacy Services. “But the road was lit because of the refinery flaring.”

While the height of Texas’ blackouts left more than 4 million homes and businesses without power, some experts say low-income areas and communities of color bore the brunt of much of the crisis. That is partly because people living in poverty often lack access to expensive backup generators, community groups say, and they tend to live in older, poorly insulated homes, where temperatures drop quickly when the power goes out.

“This impacts everybody, but there’s no denying this will be harder on low-income communities,” said Varun Rai, director of the Energy Institute at the University of Texas, Austin, who lost electricity during the emergency. “These are exactly the times when it has a real massive toll.”

As climate change foreshadows more grid disasters across the country, advocates are calling for greater transparency into how utilities decide who loses power during controlled blackouts. They are also calling for policies to better protect vulnerable residents who often lack stopgap protections like generators or disposable income for hotel stays.

There is not complete data yet on which neighborhoods were without power and for how long last week, but Texas grid officials said the outages were necessary to prevent a larger catastrophe (Energywire, Feb. 19).

Utility companies also defended their outage decisions, saying they were working to protect crucial locations such as hospitals. But critics said that outages weren’t distributed evenly — with some Texans seeing only a brief loss of power while others were off the grid for days.

“There is a severe lack of regulation, oversight and accountability for how utilities make these decisions,” said Jean Su, energy justice director at the Center for Biological Diversity.

Kerri Dunn, a spokesperson for Oncor Electric Delivery, the largest power distribution company for Texas and the largest electric service provider for Dallas, said the location of controlled outages depends on a variety of technical factors. She said accusations that wealthy neighborhoods in Dallas didn’t lose power are false. But she said the gravity of the crisis did mean outages that were initially planned to last a short time and rotate through customers instead went on for much longer in many cases.

“Typically, our emergency operation plans spread these outages across the service territory on a rotating basis,” she said. “But due to the severity of this unique and widespread power emergency, Oncor was directed by [Texas’ grid operator] to drop a record amount of load over a much longer period of time … and rotations were prevented.”

Dunn said blackout allocation was based on critical infrastructure and engineering considerations alone.

For some, that’s part of the problem.

“There are currently no explicit standards about equity or public safety in the implementation of rolling blackouts,” said Tyson Slocum, who leads the energy program at Public Citizen, a watchdog group. “The fact of the matter is, it is entirely possible and appropriate to build into blackout procedures standards about protecting certain vulnerable communities.”

Under Texas law, certain facilities like hospitals, police departments and water treatment plants can qualify as critical load customers that get priority during grid emergencies.

Residential households where someone needs a medical device to stay healthy can also apply for critical customer status. The law requires these customers to be given advance notice of power disconnections, but they are not protected from outages.

There are no requirements for grid operators to account for the locations of vulnerable communities, and there’s little public data on where and why utilities cut off power during crises like last week’s deadly cold snap.

“We can’t diagnose [the problem] properly because there is no regulatory rule that utilities have to show who they’re cutting off and why,” said Su.

Andrew Barlow, a spokesman for the Public Utility Commission of Texas, which regulates power providers in the state, said although utilities are not required to report such data, the PUC is launching an investigation into the issue.

“But we do not yet know exact demographics,” she said. “We do know that low-income households may have access to fewer resources that could have sustained them during the storm.”

‘There are more sick people’

The Texas Capitol in Austin is pictured on Feb. 15, as subfreezing temperatures caused rolling power blackouts across Texas. Bob Daemmrich/ZUMAPRESS/Newscom

As details of the devastating Texas power crisis emerged last week, so did accounts of inequality in a state where about 50% of the population is Black or Latino, and 41% is considered low-income.

Images posted on Twitter, for example, showed the Austin skyline illuminated on Feb. 15 and East Austin, a historically Black and Latino neighborhood, plunged in darkness.

Austin Energy, the capital’s public utility, issued a statement explaining that downtown Austin was excluded from the planned outages because there are several critical buildings in the area such as a medical center, a COVID-19 care site and Austin City Hall.

“Shutting down the downtown network would also cut off electricity to these critical buildings, which may also house vital communications equipment,” the press release said.

The utility urged downtown residents who were “fortunate enough to have power” to keep usage to a minimum.

But not all blackout experiences are created equal, experts said.

In the Manchester-Harrisburg region, 97% of residents are people of color and 37% live in poverty, according to a 2016 study from Union of Concerned Scientists and Texas Environmental Justice Advocacy Services.

More than 20% of Texans live in areas where access to healthy and affordable food is limited, according to the Department of Agriculture.

“Typically in low-income communities you have to travel a little further, and traveling becomes just harder,” said Rai of UT Austin.

There are also health concerns: Studies show conditions like kidney disease and respiratory illnesses disproportionally affect Black people in the U.S., and many dialysis centers and critical care facilities closed during the outages.

“In predominantly Black neighborhoods, when the lights go out there are more sick people,” said Robert Bullard, a professor at Texas Southern University and an expert on wealth and racial disparities tied to the environment. “And if the lights stay out longer, then you are talking about a disparate impact.”

Checking into a hotel to ride out the emergency is not a practical option for people living on a fixed income with limited access to transportation, said Bullard, who also lost power during the rolling blackouts.

Experts are also concerned about rising utility bills in the wake of the emergency. In Texas’ deregulated electricity market, prices can fluctuate wildly with demand. And many of those who kept their power are now facing bills in the hundreds or thousands of dollars (Energywire, Feb. 22).

Gov. Greg Abbott (R) held a meeting last weekend with Texas lawmakers to discuss potential solutions for spiking energy costs to consumers. And the PUC has indefinitely suspended disconnections for nonpayments in some, though not all, areas.

“When you talk about spikes in energy bills, you’re talking about further marginalizing low-income and moderate-income households that have limited means,” Bullard said.

Before the COVID-19 pandemic, low-income households in Texas used an average of 10% of their income on energy costs, compared with 3% for households that are not low income, according to the Texas Energy Poverty Research Institute.

Harmon, the institute’s executive director, said close to 4 million people are experiencing energy poverty in Texas, and with lost work associated with the pandemic, bills have become harder to pay.

While the PUC suspended disconnections for nonpayment at the start of the pandemic, the moratorium ended last September. A recent study from the National Bureau of Economic Research found that banning utility disconnections across the country would have decreased coronavirus-related deaths by nearly 15% (Energywire, Jan. 28).

Parras of Texas Environmental Justice Advocacy Services said she’s particularly concerned about front-line communities living near industrial complexes, which can release bursts of pollutants when they shut down and restart.

Near the Manchester neighborhood, the Valero Energy Corp. refinery was forced to flare off excess natural gas due to “unprecedented freezing weather in Houston,” the company said in an air emissions filing with Texas environmental regulators.

“Right now the refineries are flaring, and the flaring has not stopped,” said Parras.

While a number of churches and stadiums in Houston have opened their doors to people seeking respite from the cold, Parras said COVID-19 makes these close quarters dangerous.

“It’s just been one thing after another,” she said. “It’s a convolution of a pandemic crisis, the climate crisis, this [power crisis] and an economic crisis.”

Key stories you may have missed: