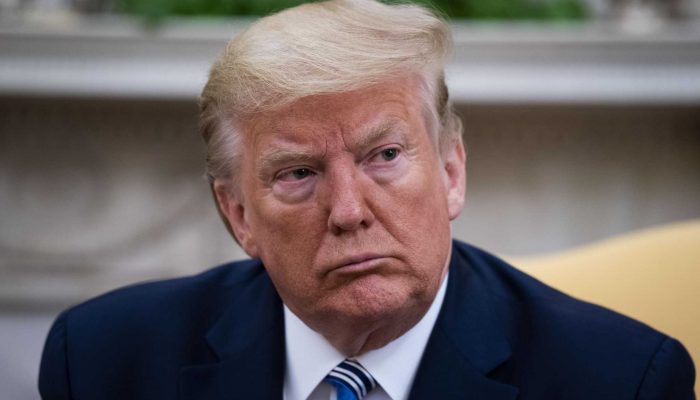 WASHINGTON — As President Donald Trump says the federal government is working to rapidly expand coronavirus testing so the country can reopen, data provided by the White House shows the federal government has so far sent materials for about 102,000 tests to Texas. That’s roughly a third of the tests administered in the state, which has ranked second to last in the nation in per-capita testing.

The testing figure is one part of the federal response to the COVID-19 outbreak in Texas that the White House detailed for Hearst Newspapers as Trump pledges to double the number of tests his administration is distributing.

It comes as the president pushes back on criticism that the White House hasn’t done enough to help states combat the outbreak, especially when it comes to testing, which health officials say will be a central need as states including Texas begin to reopen. Trump said on Monday that the numbers of tests administered has started to “absolutely skyrocket” and “will be doubling again very shortly.”

“We’re deploying the full power and strength of the federal government to help states, cities, to help local government get this horrible plague over with and over with fast,” Trump said.

The response includes millions of face masks, hundreds of thousands of gowns and more protective equipment sent from the national stockpile, as well as billions in funding authorized by Congress, according to details provided by the White House.

But for many local officials in Texas, it all comes back to testing — much more of which is needed, they say, especially as Gov. Greg Abbott moves to reopen parts of the state later this week. Houston Mayor Sylvester Turner has said the city needs to be able to administer between 3,000 and 5,000 tests per day — at least three times the rate at which it is testing now.

“I know people want to open up. I got that,” Turner said on Monday. “What is very, very important is the testing. That determines where this virus is and how prevalent it is and whether or not we’re getting our arms around this virus … it’s the testing for the city of Houston that we will continue to focus on.”

Abbott has called for Texas to up its testing to 30,000 tests per day as he allows his stay-at-home order to expire on Friday — that’s more than twice as many as the 14,000 tests that are currently given in the state per day, on average.

Dr. John Hellerstedt, who leads the Texas Department of State Health Services, said this week that the federal government has committed to “solving some of the supply chain problems that have been limiting some of our ability to test” and the state is ready to ramp up testing.

CORONAVIRUS LATEST: Keep up with COVID-19 news as it happens

As of Tuesday morning, Texas had administered 300,384 tests. The federal government had sent Texas material for about 102,000 tests as of Monday, according to the federal data. That included 116,500 swabs, more than one of which are sometimes required for a single test. Most of those tests were sent to nine federally supported community-based testing sites, including four in the Houston area, one in San Antonio and one in Austin.

The administration says the Food and Drug Administration has issued 70 emergency authorizations for new tests, including eight for serological tests, which can determine whether someone has had the virus and possibly developed immunity to it. The administration says federal agencies, including the Department of Health and Human Services and the Federal Emergency Management Agency have “surged millions of new tests and supplies to hospitals, the Indian Health Service, and other testing locations across the nation.”

On the other hand, the administration has stressed that the federal government is only one source of testing, and says it has worked to make it easier for private companies to produce and administer tests as well. Trump this week said pharmacies are starting to give tests on-site, which he said “is a very big deal.” He said his administration last week gave governors the names and addresses of private labs where they “could find additional tests.”

“Testing is not going to be a problem at all — in fact it’s going to be one of the great assets we have,” Trump said.

‘ENCOURAGING SIGNS’: President Trump holds up Houston as proof of progress on coronavirus

The federal response to COVID-19 in Texas includes:

— $2.6 billion from the Department of Health and Human Services and the Centers for Disease Control, including funding for healthcare providers and health centers

But in Texas, testing has lagged behind the rest of the nation. Twenty-six states in the U.S. are testing at least twice the number of people per capita as Texas, in some cases six times more, according to a Hearst Newspapers analysis published April 11.

Local leaders and health officials have repeatedly stressed an urgent need for more testing — especially as the governor moves to allow some businesses to begin reopening. Abbott on Monday said retail businesses, restaurants, movie theaters and malls across the state will be allowed to reopen May 1 at no more than 25 percent capacity and more businesses could be allowed to open mid-May.

“We need more testing,” said Dr. David Persse, the health authority of the city of Houston . “That’s how we get ahead of the virus. Right now we’re still chasing the virus.

“People who are well-meaning, feeling totally normal are spreading the virus unknowingly,” Persse said. “Every one of us should get tested.”

Houston-area health agencies on Monday detailed plans to ramp up COVID-19 testing, focusing several new efforts on nursing homes and areas with majority-minority populations, communities that have been disproportionately affected by the virus. The city opened one new testing facility this week and the county opened two.

About the Author: Benjamin Wermund