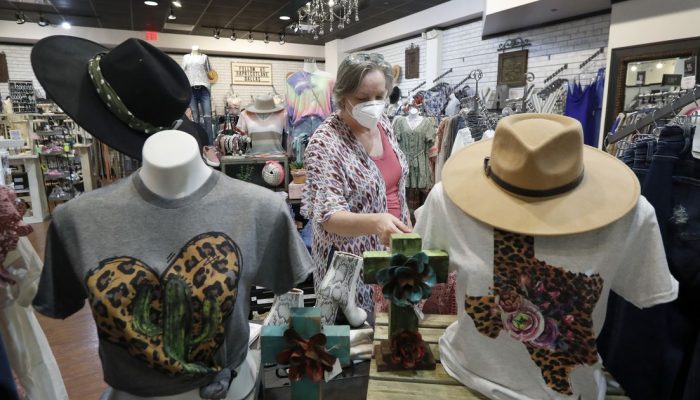 
Less than seven weeks ago, Dallas introduced the first restrictions related to COVID-19, limiting gatherings to fewer than 50 people. Doesn’t that feel like a lifetime ago?

Since then, life has been turned upside down. In a matter of weeks, gatherings of any size were banned, nonessential businesses, day cares and schools closed, and people were encouraged to stay at home.

Ours was flagged as a city of concern. “I’d be worried about Dallas,” the American Enterprise Institute’s Scott Gottlieb told Politico in March, citing the lack of testing in Texas leading to a likely undercount of infections. Our hospitals had the eerie feeling of calm before the storm. Infections started rising. We braced for the worst.

Just two week ago, Dallas County began requiring people to wear masks in public. At the time, my family had two paper masks given to us by a friend, which we started recycling. Like most millennials, I do not own a sewing machine and remember little from eighth grade home economics except for making a sinful macaroni and cheese from scratch.

Takeout margaritas from struggling restaurants and walks with loved ones spaced 6 feet apart became bright spots amid an otherwise depressing landscape of neighborhood stores with closed signs, stories of lost jobs and illness, runs on food pantries, and an emergency homeless shelter set up at the convention center. Thankfully, the curve in Dallas has largely flattened, likely in part from the restrictions in place, though we had one of our deadliest days last Tuesday, suggesting we are not yet out of the woods.

This is why “reopening Texas” — however necessary, however measured — feels like a seesaw. It’s been a lot. A lot of us are still shellshocked by it all. Almost everything has changed in a short period of time. Then just as soon as it all began, a way out appears.

This will be the first full week that Gov. Greg Abbott’s order to reopen Texas takes effect. A selection of industries, including restaurants, malls and movie theaters, are allowed to reopen at 25% capacity. But it wasn’t that long ago that the federal government recommended people keep 30 days of food and self-care supplies on hand in case they couldn’t be readily accessed. These changes take a level of mental gymnastics. We should be gentle and gracious with ourselves for coming to terms with it all.

In general, Texas’ reopening strategy strikes the right balance of economic and health risks. While the coastal elite may shake their heads at another red state’s venture into the wild west, the order appears cautious and measured, unlike the plans in, say, Georgia. It makes sense to stagger the industries that can open based on those that involve the least human contact, and to open at smaller capacities to see if outbreaks are triggered before opening more broadly.

Encouragingly, the businesses being allowed to open first are mostly in line with the Johns Hopkins Public Health Principles for phased reopening during COVID-19, which ranked sectors by contact intensity. Low-contact interactions were defined as being brief and from a distance, and high-contact interactions being prolonged exposure at close proximity. Not surprisingly, retail is relatively low (and thus opening first) compared to gyms, public transit or places of worship. Many businesses and consumers are likely to take a wait-and-see approach, so capacity is likely to be below that which is allowed.

It would inspire more confidence if the testing were in place for assessing if new outbreaks occur. This is not just nice to have, it’s the linchpin for the entire strategy to work. In the Gottlieb American Enterprise Institute report on the road map to reopening, the trigger for reopening businesses of any type and schools, includes being able to test everyone with COVID-19 symptoms and active monitoring of patients and their contacts. That’s in addition to a sustained reduction in cases for at least 14 days. Texas is not there. It appears that Abbott is taking a bit of a divide-and-conquer strategy, instead of reopening with full testing, to partially reopen with partial testing. The spacing of Abbott’s phases (on May 18, gyms open, among other businesses, and capacity increases to 50%) feels far too short to fully understand the impact of reopening on infection rates, given the testing gaps.

After the economic destruction from the last two months, it’s clear we need a more calibrated approach than what we’ve been living before a vaccine is developed. That said, the hope of normal must be marked with a dose of realism. This is not getting through a series of reopenings without spikes in infection and we are in the clear come July. The head of the Centers for Disease Control and Prevention recently said it’s not a question of if coronavirus will return in the fall; the virus most certainly will. This time must be used to get ready.

Even with reopening, the economic damage is far from a one- or two-quarter blip with a swoosh on the back end. The Congressional Budget Office released a report last week showing that unemployment would likely stay elevated above 10% until sometime in 2021. The impacts of the pandemic, even upon reopening, will be with us for some time.

The “reopening” should be thought of as baby steps on a long road. The challenge before us is to balance hope and recovery with reason and protection in the continued threat of illness. Texas has taken a first step in that direction.

Abby McCloskey is an economist and founder of McCloskey Policy LLC. She has advised multiple presidential campaigns. Website: mccloskeypolicy.com