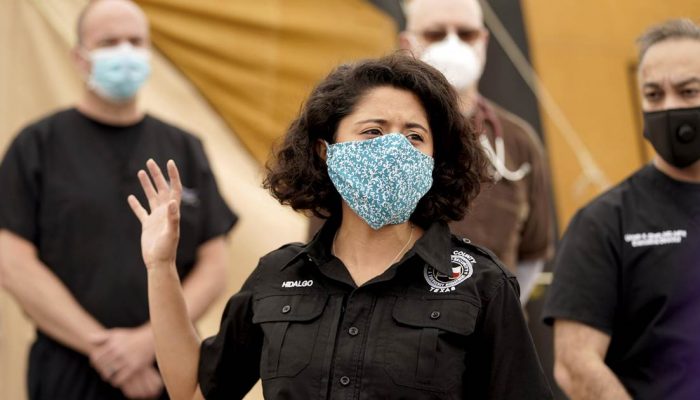 The protests haven’t reached the level of those against Michigan Gov. Gretchen Whitmer. But Hidalgo has been sued, attacked in social media and singled out among the Texas county leaders who implemented mask-wearing orders.

The criticisms were bolstered when the state’s lieutenant governor, Dan Patrick, called Hidalgo’s requirement on April 22 that all county residents wear masks or face fines of up to $1,000 “the ultimate government overreach.”

Patrick, 70 — who had previously said he and other seniors might be willing to die to save the economy — also referred to Hidalgo as an “AOC acolyte,” a reference to Rep. Alexandria Ocasio-Cortez, D-N.Y., a favorite target among conservatives.

Hidalgo is the first woman and first Latina to be elected Harris County judge, as Texas calls the position overseeing county commissioners and the county’s business. Harris County’s commission is made up of Hidalgo, two other Democrats and two Republicans.

She was 27 when she won the job, stepping in not only as a political outsider but also as a Colombian-born immigrant who arrived in Houston as a teenager. After she graduated from Stanford University, she began a joint law and graduate school program at Harvard and New York universities, but put it on hold to return to Houston and run for judge.

Hidalgo’s critics argue that she has infringed on civil liberties and constitutional rights with her mandate. Texas Gov. Greg Abbott — whose orders during the pandemic have also carried fines and jail time for noncompliance — overrode Hidalgo’s order.

Her defenders pointed out that other county leaders who implemented fines for not wearing masks weren’t similarly rebuked.

Hidalgo said that despite the hullabaloo, she is focused on her mission: preventing a future in Houston like what unfolded in other cities and countries where “the virus was winning.”

“I didn’t want that to be our fate, as well,” Hidalgo said. “What we did is we tried to do things better [and] recognize that if we do the exact same thing they did, at the exact same time they did it, then we’re just going to end up in the same place.”

On Thursday, Hidalgo extended her stay-at-home order to June 10. It conforms with the reopening of Texas by the governor and includes guidelines for employers to protect workers. As usual, Hidalgo, who is a native Spanish speaker, announced the development first in English and then in Spanish.

“I’m working my best to include everyone,” she said. “I wish I could speak more languages.”

Get a head start on the morning’s top stories.

Harris County leads the state with more than 9,800 coronavirus cases and 207 deaths as of Thursday. But the numbers are smaller proportionally than in any other places because its population is about 4.7 million people — about the same as North Carolina’s.

The county is also reeling from the economic fallout, from a rosy January forecast of over 47,000 new jobs in Houston to a projected loss of over 83,000 by the end of the year.

“She didn’t look at the polling of who was protesting,” Ellis said. “Her North Star was data driven. She moved deftly and with a sense of urgency — all along, she stepped up early.”

That included spending an estimated $17 million to build a medical shelter for 250 patients in case hospitals became overwhelmed. By April 24, when the overflow hadn’t happened, the shelter was shut down. The county will seek federal reimbursement for 75 percent of its costs.

“What we did is prevent the health care system from being overwhelmed with the types of thousands of deaths we were seeing in other places, which would have been harder on the economy and harder to recover from,” Hidalgo said.

The politics behind the masks

Few have missed the political undercurrent to the criticism.

The state, already majority minority, is experiencing rapid demographic change: Latinos are expected to be the largest population group by 2022.

“Republicans have been losing ground in Harris County and other big urban Texas counties,” he said.

Orlando Sanchez, founder of the Texas Latino Conservatives political action committee, acknowledged that Republican control has slipped in urban areas. But he said Hidalgo is failing to recognize the politics of Harris County. He has called Hidalgo’s mask order draconian and tyrannical.

“A lot of conservatives do not believe there is constitutional carte blanche to restrict our liberties,” Sanchez said. Harris County is accustomed to much more limited government, he said, while cities like Dallas and San Antonio are used to Democratic leadership.

“We are completely different from the boroughs of New York. We are Texans. We are independent. We act on our own,” said Sanchez, whose PAC recruits and supports conservative Latino candidates.

‘The test doesn’t get any bigger than this’

Hidalgo said her coronavirus strategy began with monitoring what was happening in other countries, watching South Korea contain the virus through tracing and testing.

Plan A was to do the same, but there weren’t enough swabs and reagents for full testing. The county went to Plan B, “which was the blunter tool of social distancing and shutting things down,” she said. That included the mask mandate and fines.

“I didn’t want to shut down the economy. I would have liked to have a containment approach,” she said. “There just wasn’t testing available.”

Speaking about the criticism that Hidalgo has received, Ellis said keeping a large metro area safe during an emerging global pandemic would have tested officials at any experience level.

“A lot of people want to tackle a 29-year-old Latina who has done one hell of a job. The test doesn’t get any bigger than this. This test is bigger than Harvey. It’s bigger than what [former New York Mayor Rudy] Giuliani had to do after 9/11,” Ellis said. (Hurricane Harvey, which made landfall in Texas in 2017, is one of the costliest tropical cyclones on record.)

Hidalgo isn’t ready to declare success, aware that as the state reopens, more cases could occur. She said she feels Abbott is moving too quickly, but the county is adjusting by deploying 300 coronavirus tracers to track down people who have the virus and whom they had contact with. It will urge those people to self-isolate so they can “choke off the virus.” She hopes to stay ahead of it.

“The best I can do now is to stay centered and focused on getting my community through this crisis from a health standpoint and an economic standpoint,” she said. “People are trying to knock me off my game. That’s what they want. I can’t let them do that for the sake of the community. My job is to keep them safe.”