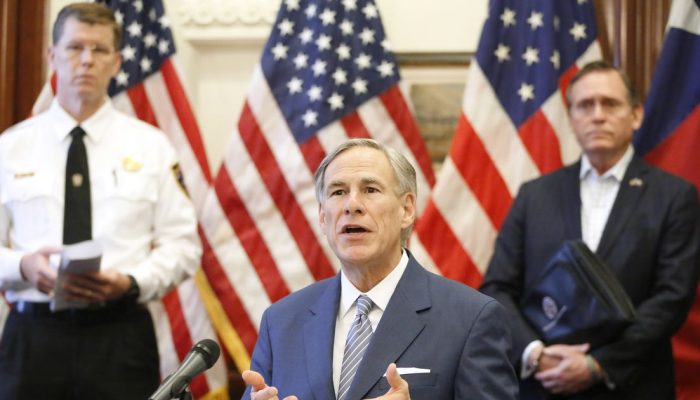 AUSTIN — After harsh criticism that Texas is not doing enough to test minority communities for COVID-19, Gov. Greg Abbott announced on Monday an effort to expand testing in underserved areas and communities with high minority populations.

Abbott said the effort was part of the state’s ongoing push to work with local governments, public health officials and emergency management offices to identify places that need additional testing and rapidly increase that capacity.

“We must address the disproportionate impact of COVID-19 on underserved and minority communities and ensure that anyone who needs a test can have one,” Abbott said in a statement.

Abbott said the Texas Department of Emergency Management is working with officials in cities like Dallas, Houston, El Paso and San Antonio to set up walk-up and drive-thru testing sites in areas that have not had access to testing.

Some local officials, however, were unaware of the state’s new effort. A spokesman for Dallas Mayor Eric Johnson said Monday his office was not told about the state’s new effort. State Rep. Garnet Coleman, D-Houston, who for months has pushed for increased testing in African American communities, also said he was surprised by the announcement.

“Nobody’s looped us into anything. That’s one of our complaints,” Coleman said. “What’s taking so long for the administration to figure out that’s what needs to be done? I’m happy that they’re doing it but I can tell you that between the pharmacies and the city, the locations for COVID-19 testing being expanded in Harris County and Houston were already being expanded prior to this announcement.”

Abbott’s new push is a reallocation of already existing resources. In a Monday interview with Spectrum News Austin, the governor described it as a “surge” in testing for minority communities.

Now that those areas have stabilized, the department will redeploy 60 of those mobile testing sites to underserved areas across the state, which includes minority neighborhoods.

In Dallas, County Judge Clay Jenkins’ office has worked with the state emergency department since May to identify locations for two-day mobile testing sites. The state set up sites at Holy Cross Catholic Church in Southeast Dallas on May 17-18 and at Lively Pointe Youth Center in Irving on June 1-2. It had also previously scheduled a site at the Los Barrios Unidos Community Clinic in Central Dallas on Thursday and Friday.

As part of the governor’s new surge, the department has set up two new mobile testing sites in Glenn Heights and Mesquite this week. Those locations take tests by appointment only, which also is handled by the state.

In Harris County, the department is adding one mobile testing unit to supplement the county’s four mobile units and two stationary sites. Each mobile site provided by the department can provide at least 150 tests per day, which they process and transport to labs. After a few days, that site will be moved to a different location identified by the county.

The department has also set up four other drive-through mobile testing sites in partnership with the City of Houston.

State Sen. Borris Miles, D-Houston, said he was grateful to Nim Kidd, chief of the Texas Department of Emergency Management, for the increased testing in Miles’ largely black and Hispanic district, which did not receive state-provided testing until May.

In the last three weeks, he said the testing sites in his district had tested more than 100 people every day they were open.

“We’re thankful for it, it’s never too late,” Miles added. “We can catch up and we still gotta reach deeper into the community.”

But lawmakers still have concerns. On Tuesday, the Mexican American Legislative Caucus and the Texas Legislative Black Caucus sent Abbott a letter requesting a meeting with state health officials to discuss COVID-19’s disproportionate impact on minorities.

“The voices from the communities being most impacted by the COVID-19 pandemic must be included as we craft policy solutions,” State Rep. Rafael Anchia, a Dallas Democrat who leads the Mexican American Legislative Caucus said in a statement. “The announcement of a state study and pledges for increased testing in Black and Hispanic populations represent a welcome response to long-standing requests from a bipartisan group of legislators. While we are optimistic that this is a step in the right direction, it is vitally important that those representing communities hit hardest by COVID-19 be included in this effort.”

Black legislators say that being kept out of the loop complicates their efforts to get information to their constituents, who are among the hardest hit by the disease.

Hispanic lawmakers have similar complaints. Without communication, some constituents — particularly Spanish-speaking ones — may not learn about the new testing sites.

Kidd said he had not heard of any language barriers at the testing sites, except at the meat-packing plants in the Panhandle where patients spoke nine different languages and 20 different dialects.

Hispanic lawmakers also are concerned that unauthorized immigrants may be staying away from testing sites because they feared being asked about their citizenship status.

Kidd said unauthorized immigrants would still have access to the tests.

“People that are undocumented still get health care,” he said. “We’re asking for identification so we make sure we get your results back to you. We need your contact information to get back to you and because of the payment process and reimbursement process, there’s a question of having insurance. But having insurance is not a condition of getting a test.”

Still, some lawmakers are concerned that SB 4 — a 2017 state law that allowed police to ask about citizenship status during a routine stop — has had a chilling impact on the state’s immigrant community.

“Policies like SB 4 sow distrust in government, sow fear, not only in immigrant communities but people like you and me when they’re driving down the street,” said State Rep. Cesar Blanco, D-El Paso. “If I’m an immigrant construction worker in this country and I have a family I need to feed — in their mind it’s probably safer to quarantine for 14 days and lose a paycheck rather than going to go get tested and get deported.”

Blanco said he does not believe the state intends to turn people over to immigration, but it is a concern that needs to be addressed in order to reassure immigrants who may fear getting a test.

Another concern is a potential surge in cases from the recent protests across the state against police brutality. Kidd said his department would be ready to shift strategy to deploy its mobile units to any new “hot spots” that arise.

“As many Texans continue to gather for protests, the state is also taking steps to address potential surges in COVID-19 cases,” Abbott said in his announcement. “We are ensuring that Texans can continue to safely exercise their First Amendment Rights while putting protocols in place to identify and mitigate any spread of COVID-19.”