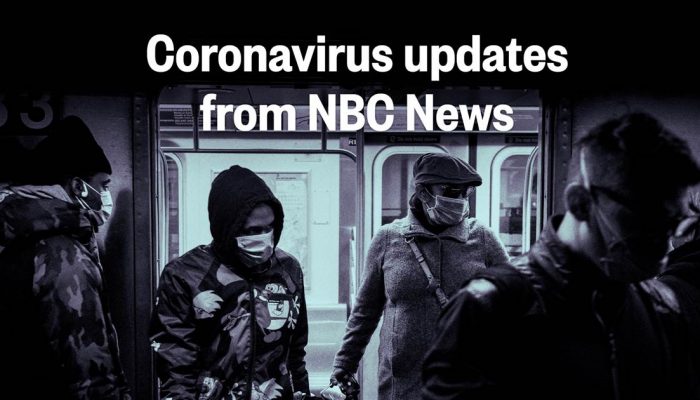 The mayor of a southern Texas city apologized for violating her own stay-at-home order after a photo surfaced on social media of her at a nail salon.

The trip Tuesday by Beaumont Mayor Becky Ames to the closed salon has sparked an investigation by the district attorney.

In the image, the mayor is seen wearing a face mask as she’s seated at a table with her hands in a bowl of water. According to NBC affiliate KBMT in Beaumont, the photo was taken at The Nail Bar.

49 residents at Massachusetts nursing home have died from the coronavirus

A Massachusetts nursing home where 30 residents had died from the coronavirus said that there have been more than a dozen additional deaths.

Belmont Manor administrator Stewart Karger wrote in a letter released Friday that 49 residents have died and 116 tested positive for COVID-19. Some tests have not yet come back.

“The loss this represents is nothing short of devastating. Our collective hearts are broken for the families of these residents, each of whom was the center of someone’s world. Rest assured that our staff did their very best to provide them both care and comfort,” the letter read.

Many of the residents are asymptomatic and Karger said they have seen “encouraging signs of recovery” among those who are showing symptoms. He said the facility is working hard to get residents healthy again.

More than 70 staff members, many of whom are asymptomatic, have also tested positive. The ones who did not have symptoms have passed a 10-day period since testing and have returned to work, the facility said. “We remain extraordinarily appreciative of the efforts of our staff. Their professionalism, compassion and commitment has been inspiring to me personally in this challenging time,” Karger wrote.

COVID-19 has killed more than 200,000 people worldwide, according to Johns Hopkins University.

More than 2.8 million cases of coronavirus infection have been confirmed worldwide, including 924,000 in the United States.

New York Gov. Andrew Cuomo said Saturday that the state is expanding its testing criteria for the coronavirus to include health care workers, first responders and other essential, frontline employees “who are risking their health to get us through this crisis.”

The governor said in his daily press briefing that the state is doing about 20,000 coronavirus tests daily and expects to double that capacity with help from the federal government.

Toward that end, he said he will be signing an executive order to allow more than 5,000 independent pharmacies in the state to collect samples that could be sent to laboratories for testing.

The state is also expanding antibody testing and will start with health care workers.

News of the testing criteria expansion comes as the state saw a slight uptick in reported deaths to 437 on Friday, compared to 422 the day before. At the same time, the number of new hospitalizations in New York continues to decline.

“Our efforts are working, but we must keep it up if we want the curve to decline faster,” Cuomo said.

Deborah Gatewood had two years to go before she could retire from a Detroit hospital.

But Gatewood, a phlebotomist for three decades, will never celebrate that milestone. She died April 17 from symptoms related to the coronavirus.

Her daughter said that prior to her mother’s death she was denied a coronavirus test four times by her employer, Beaumont Hospital, Farmington Hills.

“They said she wasn’t severe enough and that they weren’t going to test her,” said Kaila Corrothers, Gatewood’s only child. “They told her to just go home and rest.”

Why so many people are experiencing weird pandemic dreams

People around the world may be physically separated in pandemic lockdowns, but they are joined in at least one way — many are experiencing vivid and bizarre coronavirus dreams.

Nighttime visions of bugs, natural disasters and difficulties breathing are just a few of the recurring themes, traded in countless Zoom get-togethers, WhatsApp conversations and on social media, as “quarandreams” spread as quickly as the pandemic itself.

Florida-based dream analyst Lauri Loewenberg, who uses psychology to interpret people’s dreams, says lockdown stress, job and relationship worries and the sudden loss of familiar comforts have triggered a wave of surreal overnight encounters. Since the beginning of the lockdowns, she has found her Facebook inbox full of requests for appointments from people wanting to talk through their experiences.

The death toll from the coronavirus in hospitals across the U.K. has risen to 20,319 — an increase of 813 in 24 hours — the health ministry said on Saturday. The country has nearly 150,000 confirmed coronavirus cases as of Saturday.

Britain has the fifth-highest virus death toll in the world, after the U.S., Italy, Spain and France.  Back in mid-March the government’s chief scientific adviser said that keeping the death toll below 20,000 would be a “good outcome,” according to Reuters.

As the death toll rises, the U.K. government has faced criticism over its response to the pandemic while it struggles to raise its testing capacity.

Pope Francis has singled out funeral home workers for people’s prayers throughout the COVID-19 pandemic, during his early morning Mass on Saturday.

In Italy and some other countries, the deaths of people with virus infections have meant funeral parlor workers must deal with the grief of families who aren’t allowed to hold public funerals as part of government-ordered measures to try to contain the pandemic.

“What they do is so heavy and sad. They really feel the pain of this pandemic so close,” he said.

Amid quarantine, thousands are escaping to tropical islands — via ‘Animal Crossing’Characters celebrate the opening of Resident Services in “Animal Crossing: New Horizons” on the Nintendo Switch.NBC News

For Amy Okuda, not being able to spend time with her mother, who lives just five miles down the road, has been one of the most difficult parts of being in quarantine.

Disenchanted with FaceTime and Zoom, Okuda and her mother found another way to connect — by making trips to tropical islands to fish, catch bugs and pick fruit together.

“I know a lot of people are doing Zoom dates, but most of my hangout sessions are via ‘Animal Crossing,’” Okuda, 31, of Los Angeles, said.

She is one of thousands of people who have picked up Nintendo’s “Animal Crossing: New Horizons” since it was released on the company’s Switch console in March, right as the coronavirus quarantine was going into full effect for most of the nation.

Hundreds of people who live in Poland and work in Germany protested on Friday evening in the southwestern Polish border town of Zgorzelec against a mandatory coronavirus quarantine for those who cross the border.

Poland was one of the first European Union states to close borders due to the outbreak. It also imposed a mandatory two-week lockdown for those who enter its territory — a major jolt for those who live their lives in between two E.U. states. The protest was staged on a foot bridge connecting Zgorzelec and the German town of Gorlitz, which functioned as one town before the borders were closed.

Around 300 people gathered at the Polish side and some 100 at the German, some wearing face masks. The two groups were separated by a provisional metal fence that has been erected in the middle of the bridge to prevent people from crossing the border.