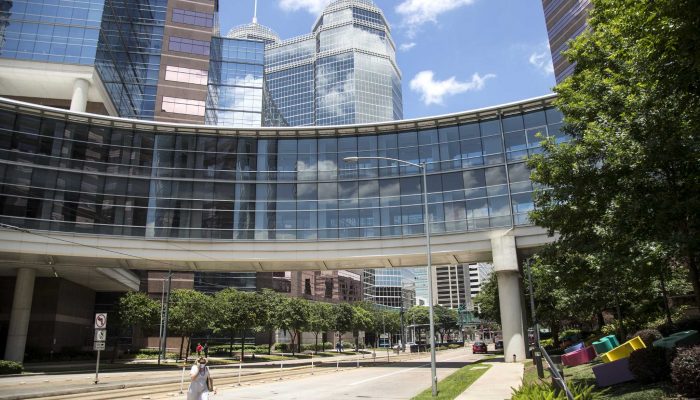 Texas Medical Center leaders Tuesday expressed support for the latest phase of Gov. Greg Abbott’s reopening of the state’s economy, arguing that even if they disagree with some of the calls, it’s a reasonably cautious approach given the tightrope he needs to walk.

The leaders, many of whom supported Harris County Judge Lina Hidalgo’s more hard-line attitude about waiting for COVID-19 cases to decline before ending the stay-at-home order, said they nevertheless like the way Abbott is allowing businesses to open in stages and pausing in between to look at the data.

“Unfortunately, we don’t have the luxury of shutting down the world and just waiting for the virus to pass because it’s going to be with us for a significant amount of time still,” said William McKeon, president of the medical center. “I appreciate Gov. Abbott’s methodical approach, closely watching the numbers, surrounded by medical experts, as he attempts the difficult task of trying to balance two conflicting forces — controlling the spread of the virus while we learn to live with it.”

Abbott pressed ahead with the state’s reopening Monday, allowing child-care facilities to fully reopen and nearly all businesses and activities to resume at limited capacity. Restaurants can double their capacity to 50 percent, and bars, bowling alleys and bingo halls can reopen at 25 percent. Youth and professional sports can resume later this month, although fans will be allowed only at youth events.

Abbott’s moves were roundly criticized by Democrats, who accused the governor of rushing to reopen and ignoring recent increases in deaths and reported infections.

New cases of COVID-19, the disease caused by the novel coronavirus, have ticked up over the past week and now average about 1,300 per day. At least some of that is likely the result of expanded testing, especially in Amarillo, where cases at meatpacking facilities have spiked dramatically.

In addition, some Houston health and medical experts did not fall in line with TMC leadership. Rice University health economist Vivian Ho said Abbott is “moving too fast” and called some of the openings “a disaster in the making.”

“It’s going to be fine until it’s not fine,” said Ho. “You’ve got all these people who don’t have the virus because they’ve been sheltering in place, but it’s only a matter of time before a few get it and they go to these locations — a bar, a gym — and infect 10 people. I’m not so worried about the rest of this month as I am about July, when I fear there’ll be a spike.”

Ho said that Abbott’s rush to open the economy is actually undermining it. She argues that half the population is still “too scared and paranoid” to go to establishments, causing a lackadaisical economic response. She also argues that it pits businesses against other, making some feel pressure to open now because they are in danger of losing customers to their competitors. At least some, she said, would have fared better had Abbott required all to open at a slower pace, when, with case numbers down, more people would feel confident to go out.

Peter Hotez, dean of the National School of Tropical Medicine at Baylor College of Medicine, laughs at the idea that bars will station someone at the entrance turning down customers because they’re one quarter full. He said he doesn’t know how businesses will adhere to the guidelines.

“Bottom line, within a week or two Texas will be fully open for businesses,” Hotez said.

Abbott downplayed the increased numbers on Monday, noting that the rate of people testing positive for COVID-19 has fallen significantly and that there are plenty of hospital beds and medical equipment to contain future outbreaks.

Dr. Marc Boom, president of Houston Methodist, said that’s consistent with trends at the system’s hospitals. He said Methodist’s positive COVID-19 test rates, which approached 20 percent at the peak, are currently in the 3 percent to 6 percent range. He also said hospitalization and intensive care unit rates for the disease have not gone up despite a recent increase in cases in Texas.

“Do I agree with every piece and sequences of what the governor’s opened?” asked Boom. “Of course not. But no one has the perfect answer to that. Have we seen major cause for alarm? No. Have we seen cause to watch closely? Absolutely.”

“Every company now must become a medical company, thinking about its responsibility to keep its workers healthy,” McKeon said.

Porsa added that it’ll be safe for people to return to work if newly reopened businesses make the necessary changes. “That’s a big if,” he added. “We’re seeing pictures of folks not heeding advice, crowding into small areas and not observing social distancing.”

Dr. Umair Shah, executive director of Harris County Public Health, said the governor has reopened “at a little faster pace than I would have liked,” but also acknowledged the lock down’s incredible socioeconomic impact.

Still, he said spikes in cases will strain the health department ability to conduct contact tracing considered critical to containing the spread of COVID-19. He said a staff of 300 tracers, the current plan, will be able to handle up to 200 new cases a day. Anything more will require even more expansion of the staff.

Shah pleads with people to help out.

“The key thing is that people make informed choices,” said Shah. “Just because an establishment is open doesn’t mean you have to go in. If the establishment is not following social distancing protocols, go to the one that is.”

Hannah Dellinger contributed to this report.