Home TexasCovidNews Texas might have provided some takeaways for the future 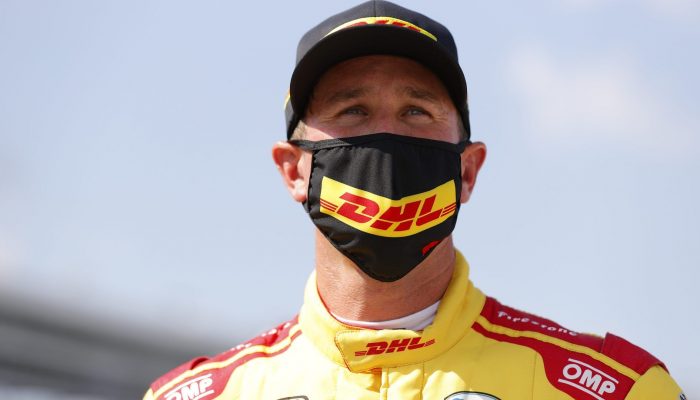 
IndyCar’s longest day seems to have been one of the smoothest, considering the logistics Saturday of getting nearly 1,000 people to in and out of Texas Motor Speedway.

An NTT Series spokesperson told NBC Sports there were no issues in health screenings Saturday, and that the two dozen teams competing in the Genesys 300 all were processed and inside the track by 8 a.m. CT.

Working off a 36-page playbook for racing during the novel coronavirus (COVID-19) pandemic, there were two temperature checks, one upon arrival at the airport and again for entry to the paddock and garage area.

After leaving for Texas on early morning flights Saturday, all of the teams from Indianapolis had landed back home by 2:30 a.m. ET.

Series officials will be reviewing the 2020 season opener, but IndyCar drivers seemed pleased with how Texas operated on a full day that included practice, qualifying and the race.

Scott Dixon was in victory lane for the Genesys 300 at Texas Motor Speedway after a long day at the track (Tom Pennington/Getty Images).

“It was really the unknowns, trying to cram that all in,” race winner Scott Dixon said. “Traveling here this morning, qualifying, practice, race, then we fly home. First time we’ve ever done anything like that. A lot of new things.

“Maybe that’s how we’ll do a lot of our events from now on. I’m not sure. I actually kind of enjoyed it. Kind of cool to do doubleheaders like this, which I think we’re going to do in the future this season, which is going to be a lot of fun.”

The IndyCar Series has Saturday-Sunday doubleheaders upcoming next month at Road America and Iowa Speedway and in September at WeatherTech Raceway Laguna Seca, so the one-day schedule could become a blueprint of sorts.

If it does, the pressure could be ratcheted up on teams to be precise with prerace adjustments.

“The one-day show was very interesting because you had to be very decisive on your decisions,” Texas runner-up Simon Pagenaud said. “Obviously, after the first session, we kind of had to decide the race setup right away because the car was going to go to impound after qualifying. That’s a split decision you make in a very short amount of time with your engineer.”

For teammate and pole-sitter Josef Newgarden, his Team Penske crew guessed wrong, but he still led 41 laps and finished third.

“The hardest part for me was basically thinking we made the right decisions going into the race, about 15 laps in realizing that we were horribly off the mark,” Newgarden said. “So you don’t have a lot of time to rectify an issue. I think if there was more practice, more of a lead-up to this event, maybe we would have had some clues to point out maybe we weren’t as strong as we thought we were going into the race.

“When you have that jam-packed schedule, it’s kind of on the team and the driver to execute quickly and to make the right decisions, to show up with good stuff, kind of stick to your guns. I like that. I really like that style. It didn’t work out for us tonight. I think in the future we can hopefully thrive in that situation.”

There was some confusion about why lapped cars weren’t cleared between Dixon and Pagenaud before the restart with four laps to go. IndyCar officials enforced an “abandonment of procedures” rule (which had been discussed in the prerace virtual drivers meeting).

That allows for the suspension of rules (such as the one that dictates lapped cars are moved to the rear on superspeedway restarts with fewer than 15 laps remaining) late in a race under yellow to ensure a green-flag finish.

Pagenaud also expressed initial confusion about the situation but also said it wouldn’t have impacted the outcome because “Dixon was too good anyways. I’m pretty realistic about my chances.

“Yeah, I didn’t understand the situation,” he said. “ I need to look at the rules. Yeah, I was surprised that they didn’t move the cars. I’m assuming it’s because they wanted to go back green. Quite frankly, I get that. You have to give a show. We’re here for a show at the end of the day. … I think that’s probably what race control saw. The only way they could go back green in time before the end was to do that. If they decided to do that, I totally get it.”

Texas Motor Speedway cautioned drivers that what appeared to be a safe surface actually offered no grip, but the temptation still was unavoidable. Several drivers spun in practice, qualifying and the race after getting in the higher lane that had been coated in PJ1 traction compound seven months earlier.

Though track workers tried to scrape off remnants of the compound a few weeks ago, it still left a darker shade — essentially a ghost image of the asphalt-style superglue sprayed in the turns before the NASCAR race weekend last November.

Ryan Hunter-Reay said it “absolutely was” a factor in his practice incident.

“They warned us about it earlier, saying that it’s more of a stain at the moment,” said Hunter-Reay, who rebounded to qualify fourth after his team scrambled to repair the damaged to his No. 28  Dallara-Honda. “There is no grip to it. There’s nothing there that’s going to help you.

“It’s strange. I mean, it’s very dark, which usually all my years of racing you see dark, you think that’s going to be a quick side, that is going to be rubber, something to help you. But yeah, there’s no traction about it. It’s tricky.”

Newgarden didn’t think the lack of traction compound was necessarily a major reason for the crashes, but he did note Texas still lacks a wider groove for IndyCar since its 2017 repave. Because the pandemic precluded Firestone building new tires that were matched to the heavier Aeroscreen-laden cars, Saturday was largely a track-position race.

“I think we’re always constantly trying to figure out ways how we can create more lanes,” Newgarden said. “For us, what made Texas such a great track is when we could run two- or three-wide. I think everyone wants to do that. We’re struggling to find a way to build the grip up in the second and third lane. … Three years before it was paved, it used to race two- or three-wide. We want to get it back to that.”

Though he wasn’t on the pit box calling strategy Saturday night, Roger Penske still was a presence at Texas.

He visited the NBC booth before the race, which he watched from a frontstretch suite. He also made headlines about the Indianapolis 500 in separate interviews with the Associated Press’ Jenna Fryer and RACER.com’s Robin Miller.

“We’re on for fans in August and planning on it and we feel good,” Penske told Miller about the Aug. 23 race. “It’s still almost three months from now and I think we’ll be OK. But we will run it only with fans.”

IndyCar: Texas might have provided some takeaways for the future originally appeared on NBCSports.com