Home TexasCovidNews Texas military: COVID-19 is a ‘different type of event’ than other deployments 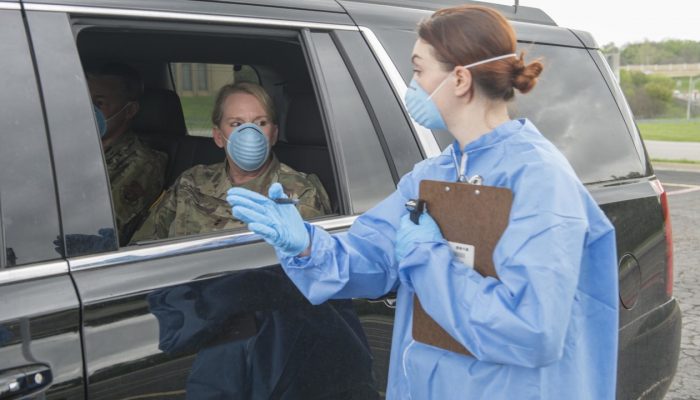 AUSTIN (Nexstar) — The state’s lead military official in charge of providing troops for state and federal missions called the response to the coronavirus outbreak “different” than other deployments, like in the case of natural disasters.

Major General Tracy Norris is the adjutant general of Texas, providing forces to the governor for state missions, and commander of the Texas National Guard, providing Texas Army and Air Guard troops to the president for federal operations.

She said over 500 Texas National Guard, soldiers and airmen are deployed for the response.

“We are actually ready to surge at any point to support any of our other state agencies or any of our communities,” Norris said.

The deployment numbers represent a stark contrast to the 25,000 soldiers and airmen deployed after Hurricane Harvey, which Norris said was one of the biggest events the Texas National guard had ever faced.

“COVID-19 is a different type of event. We are responding to the needs as we get them,” Norris said. “And also though we have the whole Texas National Guard to respond if needed for this event.”

The state’s military mobilization aims to focus on three main priorities outlined by the Governor and Norris. Those include helping with drive-thru testing operations, assisting to identify bed capacity, and partner with agencies to distribute personal protective equipment and other commodities. She indicated there is “no discussion and no planning for any mission” that would require the Texas National Guard to be armed.

In conjunction with the U.S. Army Corps of Engineers, the Texas Army and Air National Guard has conducted facility assessments of buildings around Texas that could be used as pop-up hospitals.

“We have identified facilities in Austin, and in Dallas-Fort Worth in Houston, in the Valley, El Paso and several other locations. And we will work with the local communities about what level of care they’re going to want in those facilities if they’re needed,” Norris said.

Answering questions through a recorded interview released late on April 6, Norris said at that time the Texas National Guard had 11 positive COVID-19 cases.

“None of these cases have been related to the response,” she said. “It’s all been from traveling before the response.”

“We also monitor all of our soldiers and airmen, and if any of them does get sick or have a temperature, we do pull them from that mission and we make sure they get to the right place where they can recover,” Norris explained.

As for the troops stationed along the Texas-Mexico border, their duties have not changed.

“Those soldiers and airmen will continue to do the job that they’re assigned as long as needed,” Norris said. “Also, they’ve been given some additional protective equipment so they can stay safe and healthy and continue the job in the southwest border.”

Norris also attempted to dispel rumors about troops participating in martial law, or the replacement of civil rule with temporary military authority in a time of crisis.

“This is not the case,” Norris said. “We are Texans serving Texas. We’re here to serve you. We want to kill this COVID-19 virus.”