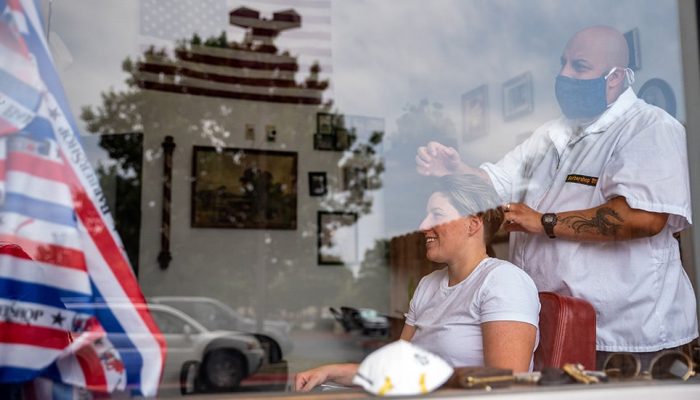 Texas, North Carolina and Arizona are among the states seeing rising numbers of coronavirus cases, intensifying concerns as they seek to reopen shuttered economies.

The seven-day average in new cases in all three states has also been rising, according to data compiled by The New York Times.

The data illustrate the risk of states reopening even amid ongoing outbreaks. Texas and Arizona are both relatively far along in reopening, having given the green light to businesses like restaurants and barber shops, though they have cautioned to open with limited capacity and other safety measures. North Carolina is less far down the road toward opening but has entered its first phase, allowing retail stores to open with precautions.

Texas and Arizona are both led by Republican governors, while North Carolina has a Democratic governor.

One reason for the increasing number of cases in all three states is that they are all seeing a significant rise in testing, which means more people carrying COVID-19 are being identified.

Still, she called the increase in her state “concerning” and noted that it comes as restrictions are being eased. “When we see this kind of an increase in case counts, we also know that we are easing restrictions and folks are moving around more,” she said, urging residents to wear face coverings, keep six feet apart and wash their hands as restrictions lift.

Not all states that are reopening are seeing increased numbers of coronavirus cases, and there are significant variations across the country as states move forward with various phases of reopening.

Georgia, one of the earliest states to start reopening, has not seen a spike in cases, and in fact had a slight decrease. Florida, similarly, has been mostly flat.

Yet even this needs to be taken with some caveats.

Because it takes time for someone with the coronavirus to develop symptoms and get tested, it can take two weeks for new cases to show up in the data.

Nationally, there are some hopeful signs of a decline in new cases. But that trend masks significant regional variation.

New York and New Jersey, once by far the epicenter of infections in the United States, have seen significant declines in new cases in recent weeks. But other states, like Texas and Arizona, are seeing increases.

Spokesmen for Texas Gov. Greg Abbott (R) and Arizona Gov. Doug Ducey (R) both pointed to their states’ increasing testing as a factor to explain the increases.

Both states have fairly low positivity rates on their testing (the percentage of total tests that come back positive), a favorable sign. Rates in both states are about 5 percent, down significantly from the rates in April. North Carolina’s positivity rate has been steady at about 6 percent.

Texas said about 700 of the cases in its spike of 1,800 over the weekend came from targeted testing of meatpacking plants in two counties.

All three states are also not seeing problems with hospital capacity, a key metric.

Still, reopening the economy will likely lead to increases in cases, experts say, as people interact more and spread the virus.

“It is not surprising that we are seeing more reported cases given that we have started to reopen, people are more mobile and we’re doing a lot more testing,” said Aaron McKethan, a senior policy fellow at the Duke-Margolis Center for Health Policy.

Experts also noted, however, that a balance needs to be struck between public health and the economy, given that stay-at-home orders cannot last forever.

“If we were only looking at public health considerations, we would of course maintain lockdown indefinitely, but that’s not feasible,” McKethan said.

Michael Mina, a professor at the Harvard T.H. Chan School of Public Health, said he thinks the country is on the brink of “societal collapse” if it does not reopen the economy soon, though he noted concerns from a health standpoint.

“Myself and many of my colleagues are very nervous about this idea of opening up this early, without the right pieces in place, but it does need to happen,” Mina said.

One of those key pieces is testing. Ideally, as in countries like South Korea, the number of cases overall would be low enough that new sparks can be stamped out through rigorous testing and contact tracing around emerging outbreaks.

While the situation on those fronts has been improving, there are still weaknesses.

While the number of tests nationwide has climbed to about 350,000 per day recently, Harvard researchers estimated the country needs at least 900,000 tests per day earlier this month.

Ohio Gov. Mike DeWine (R) noted the tensions around reopening on Sunday on CNN’s “State of the Union,” saying his state is at a “plateau” in new cases when he would rather see a decline.

“This is really probably the most crucial time, the most dangerous time, because we are opening back up, because we have to open back up,” he said. “But, at the same time, that creates more exposure, more opportunity for this virus to spread.”