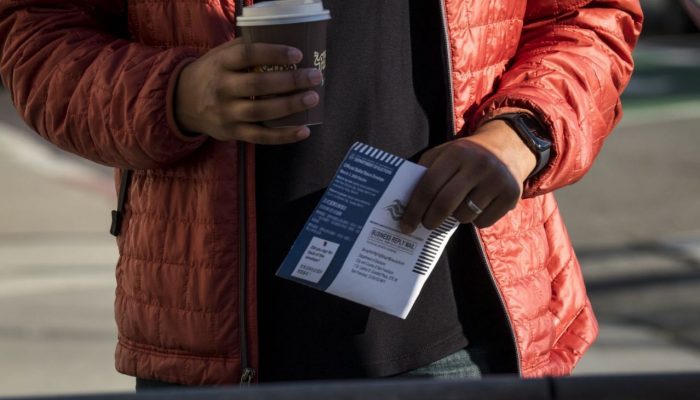 (Bloomberg) — Texas must let any registered voter afraid of catching the coronavirus vote by mail in upcoming elections, a state court in Austin ordered Tuesday, according to the American Civil Liberties Union.

The bench ruling by Travis County District Judge Tim Sulak came hours after Texas Attorney General Ken Paxton, a Republican, stated that voters without physical conditions or illnesses that prevent their voting at the polls will be denied mail-in ballots.

Kayleigh Date, a spokeswoman for the Texas attorney general’s office, didn’t immediately respond to a request for comment.

Sulak’s ruling, which is not yet publicly available, sets up yet another showdown between Texas’s Republican political leadership and civil-rights groups. The fight will undoubtedly draw the attention of President Donald Trump, who has expressed displeasure with mail-in ballots, believing them to be a source of voter fraud.

The Austin case was filed April 1 by the Texas Democratic Party and voters anxious about casting ballots at crowded polling stations during a pandemic. The U.S. Supreme Court on April 6 refused to halt in-person voting in Wisconsin for the presidential primaries and some state office elections the next day.

Sulak’s ruling is likely to be appealed to a higher court and possibly the Texas Supreme Court, from which it could be reviewed by the U.S. Supreme Court.

“Common sense and the spirit of the law won over the attorney general’s inexplicable stance that voters’ susceptibility to Covid-19 isn’t a physical condition under the law today,” Joaquin Gonzalez, an attorney with the Texas Civil Rights Project, said in a release announcing the judge’s bench ruling following a teleconference in the case.

“The court recognized the gravity of not allowing all eligible voters a mail-in option during the pandemic,” Sophia Lin Lakin, deputy director of the ACLU’s Voting Rights Project, said in the same release. “It is a common-sense solution to protect democracy and people’s well-being during this public health crisis.”

Texas has made a number of legally provocative moves during the coronavirus crisis. Governor Greg Abbott’s restricted abortions as “non-essential” procedures, drawing several legal challenges. The state is also fighting a broad coalition of state judges, county officials and criminal defense attorneys over its restrictions on releasing prisoners to limit the virus’s spread in overcrowded jails.

(Adds background. A previous version of this story corrected the court and title of the judge who issued the ruling)

For more articles like this, please visit us at bloomberg.com

Subscribe now to stay ahead with the most trusted business news source.