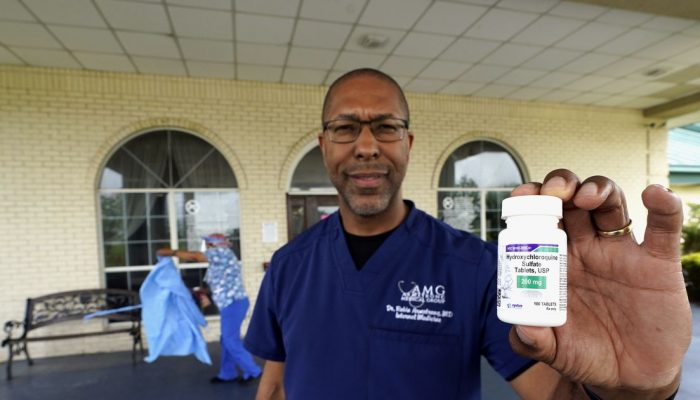 AUSTIN — The state’s public health agency is sending hundreds of bottles of an unproven coronavirus treatment to hospitals in Dallas and across Texas.

Mineola Sen. Bryan Hughes brokered the donation of 1 million hydroxychloroquine sulfate tablets, an anti-malaria drug President Donald Trump has promoted in the treatment of COVID-19, but that experts warn is not yet proven effective.

“The data are really just at best suggestive,” Dr. Anthony Fauci, the director of the National Institute of Allergy and Infectious Diseases, said recently on CBS. “There have been cases that show there may be an effect… and there are others to show there’s no effect.”

The Texas Department of State Health Services has shipped out over 63,000 hydroxychloroquine tablets in the past two weeks to at least 70 hospitals — a fraction of the state’s overall supply that indicates medical professionals may not be clamoring for the drug, records show.

Medical City locations across North Texas have secured at least 50 bottles, amounting to 5,000 tablets, from the state — the largest shipment to the Dallas area, state data show. But it’s not clear how many patients have received the drug so far. Spokeswoman Janet St. James said the medicine has only been used for certain COVID-19 patients “with appropriate informed consent” and recovery is closely monitored.

John Peter Smith Hospital in Fort Worth also received 10 bottles of the drug, as did Methodist Richardson Medical Center. Neither immediately responded to questions about how the medicine has been used.

Hydroxychloroquine has long been used to treat malaria and autoimmune diseases including lupus and rheumatoid arthritis, but is not yet proven against COVID-19.

One study found the drug helped prevent the virus from infecting cells in the lab, which is no guarantee it will work in humans. Doctors in France reported in a small study that patients who were given the medicine, and the antibiotic azithromycin, seemed to recover more quickly. But after publishing the French study, the medical society that oversees the journal acknowledged concerns about the content and said “additional independent peer review is ongoing” to determine whether those have merit.

Rigorous clinical trials are needed to determine whether the medicine works to treat COVID-19 in humans and at what stage of the disease it might be most effective, said Dr. William Schaffner, professor of infectious diseases at the Vanderbilt University School of Medicine.

Such clinical trials are underway, but results may be months away. In one, funded by the National Institutes of Health, hospitalized patients will receive either a 5-day course of hydroxychloroquine or a placebo. The study is blinded, meaning patients, clinicians and the study investigators do not know who is taking the drug or placebo.

“We know what we think the drug does based on decades of use. From there, we think it might work for coronavirus, but there’s a lot of promising medicines that have not translated into improvements when given to patients,” said the trial’s lead investigator Dr. Wesley Self, an emergency physician at Vanderbilt University Medical Center. “We need the clinical data to see if it does.”

That hasn’t stopped doctors at hospitals, freestanding ERs and nursing homes across Texas from prescribing the medication to coronavirus patients.

In one of the largest known examples, the medical director of a Texas City nursing home has given hydroxychloroquine to roughly 39 of the residents who have tested positive for COVID-19.

Since starting a 5-day regimen of hydroxychloroquine, azithromycin and the vitamin zinc, the first group of patients either improved or stayed the same, said Dr. Robin Armstrong. None has gone to the hospital. He acknowledged it is not clear whether the drugs are to thank or the patients’ own immune response.

“That’s a hard thing to tease out,” Armstong said. “We are compiling a lot of data to try to figure that question out ourselves.”

Dr. Robin Armstrong, left, prepares to enter The Resort at Texas City nursing home, where he is the medical director, Tuesday, April 7, 2020, in Texas City, Texas. Amrstrong said Tuesday it is too soon to tell whether the treatment is working. But his sweeping use of hydroxychloroquine at the nursing home illustrates how Trump’s championing of the medication is having an impact on doctors across the U.S., even as scientists warn that more testing is needed before it’s proven safe and effective against COVID-19. (AP Photo/David J. Phillip)(David J. Phillip)

The virus causes mild or moderate symptoms for most people. But it can cause serious sickness for some, especially older adults and those with existing health problems such as diabetes or cancer. The death rate in Texas is not entirely clear, but most people recover.

Results collected from the drug’s use at the nursing home have not yet been shared publicly and the administration has not asked for them, said Armstrong, who is also a Republican National Committee member and an advisory board member of Black Voices for Trump.

Alecia Mason said her family only fully learned her 90-year-old grandmother was on hydroxychloroquine after Gov. Greg Abbott announced Monday that residents of The Resort at Texas City were trying the medication.

The drug can cause serious side effects including irregular heart rhythms, which gave Mason pause. She is hopeful the drug will help her grandmother, but said more research needs to be done.

“Our elderly are our most vulnerable population,” she said. They “shouldn’t be used as experimental people.”

Armstrong said families were not alerted because it’s an “off label use of a medication that we use all the time.”

“It’s really a novel use of these very old medications,” he said, adding patients’ oxygen levels and heart activity are being regularly monitored.

Armstrong was motivated to use the medicine to try to keep elderly nursing home residents out of the hospitals, he said.

A Seattle businessman who tested positive for novel coronavirus while in Dallas last month was also prescribed hydroxychloroquine at a freestanding ER in North Texas. Stephen Lockwood, who said the disease made it hard to breathe, remembers feeling better after a few days of treatment. Now he is waiting to see whether his health insurance will cover the cost.

“My primary care physician thought I was over-treated and this was not necessary treatment,” said Lockwood, 58, who drove back to the Pacific Northwest from Texas. “For what it’s worth I feel like it was an effective treatment.”

The Texas Medical Board confirmed it has received a few complaints about the prescription of hydroxychloroquine to treat COVID-19. The board that oversees doctors has not issued any guidance on the issue, spokesman Jarrett Schneider said.

Similarly, the Texas Department of State Health Services is not providing guidance about prescribing the drug.

“It’s up to a medical professional to determine how and when it would be appropriate for a patient,” DSHS spokesman Chris Van Deusen said in a statement. “In the ordering information for hospitals, we note that it is currently under investigation for the treatment of COVID-19 and is not approved by the FDA for that use.”

In late March, the U.S. Food and Drug Administration allowed the drug to be donated to the national stockpile and used by doctors to treat hospitalized COVID-19 patients when a clinical trial is not available. The U.S. Department of Veterans Affairs and the Bureau of Prisons are stocking up on hydroxychloroquine to treat COVID-19 cases, according to the Los Angeles Times.

Since securing a shipment of the medication for Texas from Amneal Pharmaceuticals, Hughes, the state senator, said he has helped facilitate donations to other states, including Louisiana, Arkansas, Georgia, Michigan and Connecticut.

Hughes, an attorney, said he made a connection with the New Jersey-based pharmaceutical company through a colleague at his law firm who is friends with one of the board members.

“We see our role in making it available for the doctors who want it for their patients,” said Hughes, a Republican.

Meanwhile, a rush on the drugs is making it hard for patients with lupus to get them. On March 19, prescriptions in Texas for hydroxychloroquine and chloroquine spiked to over 28,000, from roughly 10,000 the day before, according to data provided by the Texas State Board of Pharmacy. In response, the board limited the supply each person could get at one time.

“Our patients should be able to have access to it, just as much as those (coronavirus) patients,” said Rebecca Kramer, President and CEO of the Texas Gulf Coast Chapter of the Lupus Foundation of America. “For a lupus patient they can go into a full-on flare up and end up in the hospital themselves, which would put more strain on the medical community.”