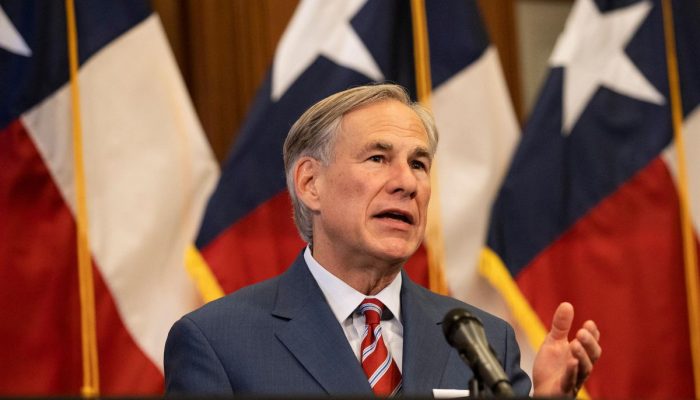 More people were being treated at hospitals for the coronavirus in Texas on Monday than at any point in the pandemic, according to statistics from the Texas Department of State Health Services, as the state has continued to move forward with its reopening efforts.

AUSTIN, TX – MAY 18: (EDITORIAL USE ONLY) Texas Governor Greg Abbott announces the reopening of more … [+] Texas businesses during the COVID-19 pandemic at a press conference at the Texas State Capitol in Austin on Monday, May 18, 2020. Abbott said that childcare facilities, youth camps, some professional sports, and bars may now begin to fully or partially reopen their facilities as outlined by regulations listed on the Open Texas website. (Photo by Lynda M. Gonzalez-Pool/Getty Images)

The state reported there were 1,935 in-patients being treated for coronavirus on Monday, topping the old high of 1,888 on May 5.

The number of people hospitalized in Texas has increased 11 out of the last 14 days, gradually rising from 1,511 hospitalizations on May 25.

But that rise hasn’t dissuaded state officials from moving forward with reopening—the state moved to Phase 3 last Wednesday, allowing essentially all businesses to operate so long as they did so at 50% of their normal capacity.

Sports stadiums are now allowed to have crowds at 50% of their normal capacity, and restaurants can increase seating capacity from 50% at present to 75% starting this Friday.

New cases are also on the rise in Texas compared with what was seen in late May, though Republican Gov. Greg Abbott has said in the past that the state should expect spikes as it increases testing.

While much of the country had new case counts plateau around early- to mid-April, new cases in Texas continued to rise throughout May. Single-day new case highs were hit multiple times, with its highest being 1,949 new cases recorded on May 31. Abbott credited the rise to an increase in testing, saying clusters in the state are primarily confined to meatpacking plants, nursing homes and prisons.

The state, which is the second-largest by both population and area in the U.S., took an aggressive approach to reopening, entering its Phase 1 reopening on May 1, followed by Phase 2 on May 22 and Phase 3 last Wednesday. That approach has won Abbott praise from President Donald Trump.

California recorded its highest single-day increase in cases last Friday while Arkansas’ total case count has jumped by almost 30% over this past week alone.

WHAT TO WATCH FOR

Health experts have warned that rises in infections and hospitalizations from large gatherings likely wouldn’t be reflected in data for at least two weeks. With Monday being two weeks since Memorial Day, and also two weeks since protests started following the death of George Floyd, data should soon show if those large gatherings have led to an increase in coronavirus spread.

Coronavirus Infections Are On The Rise In 21 U.S. States, With Cases Spiking In California, Arizona And North Carolina (Forbes)

About the Author: Nicholas Reimann