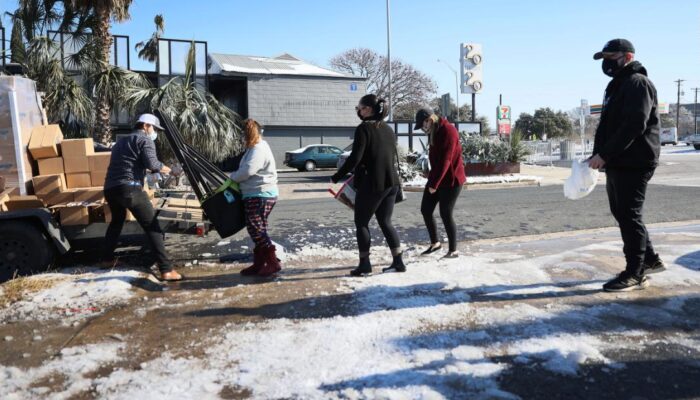 Democratic Texas Reps. Sylvia Garcia and Sheila Jackson Lee, as well as New York Rep. Alexandria Ocasio-Cortez, spoke at a news conference outside the Houston Food Bank where they said they plan to help Texans affected by the winter storm.

Ocasio-Cortez raised money ahead of the visit and said 100% of the funds will go to five to 10 organizations to help Texans affected by the winter storm.

“You know, when disaster strikes, this is not just an issue for Texans, this is an issue for our entire country,” Ocasio-Cortez said. “As was mentioned earlier, disasters don’t strike everyone equally when you already have so many families in the state and across the country that are on the brink, that can’t even afford an emergency to begin with.”

“You know, we really need to make sure that we’re getting food and assistance to people across the state, as was mentioned here, at the Houston Food Bank, no questions are asked,” Ocasio-Cortez said.

“That’s the New York spirit, that’s the Texas spirit and that’s the American spirit,” she added.

Garcia said she was glad Ocasio-Cortez was there to help Texans. She also said she believed the state leaders should have responded better and said there should be an independent investigation of the grid.

“(Disasters) hurts the vulnerable populations even more,” Garcia, who spoke first, said during the press conference. “My district was totally in the dark. And I know people are still hurting today … we’ve got repairs to make.”

“And now help is here with my good friend Rep. Ocasio-Cortez sent me a text and said, well I want to do something, so I immediately said, ‘Whatever you do include the Houston Food Bank,'” she said. “You know, we’re from Texas right? Who does things with New York? We always kind of make fun of New York. But this time we love New York.”

Garcia also called for accountability to investigate how Texans were so affected by the disaster.

“We’re not here to do anything other than talk to people,” Garcia added. “The response could be better from our state leadership. It could have been better in preparation, and it better, step up and it’d be better in doing a full independent investigation on why this incident happened, why they didn’t weatherize, why didn’t they prepare, what are they going to do, and make sure they do it in a transparent fashion, fair and equitable fashion.”

She added: “There will need to be reforms with ERCOT and I urge the legislature to do that. And then should include looking at whether or not to join the federal grid. I think everything should be on the table, Texas did not want to go through this again. They want accountability.”

Jackson Lee said she was worried for her constituents when calls came in from people, including children, who were afraid they would die overnight from the freezing temperatures.

“This leaves me at an unspeakable and emotional moment,” she said.