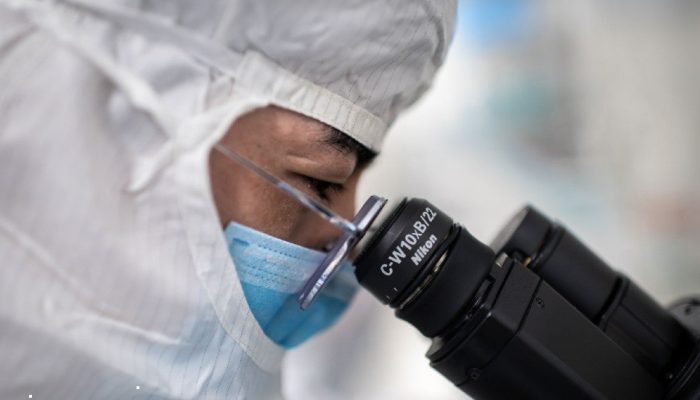 –> A midday take on what’s happening in politics and how to have a sense of humor about it.*

One step closer to a vaccine:

Via The Hill’s Peter Sullivan, “Pfizer and the German company BioNTech announced Tuesday that they have begun human trials of a potential coronavirus vaccine.” https://bit.ly/3fmRt6k

The first stage: “The first stage of the trial will involve up to 360 people, testing measures like whether the vaccine is safe and what the right dosage level is.”

To hopefully speed up the process: “Pfizer and BioNTech are actually testing four vaccine candidates at the same time, all different versions of what is known as an mRNA vaccine. The companies hope testing all four vaccines will allow the process to move faster by seeing which one works the best.”

Interesting tidbit — a vaccine may be manufactured before it’s been approved: “The companies are already preparing to ramp up production of the potential vaccine. Experts say that a key step in speeding up the process is starting to manufacture the vaccine even before it is clear whether it works.”

Keep in mind: Other companies are also actively working on a COVID-19 vaccine.

It’s Tuesday — today is Cinco de Mayo!  I’m Cate Martel with a quick recap of the morning and what’s coming up. Send comments, story ideas and events for our radar to cmartel@thehill.com  — and follow along on Twitter @CateMartel and Facebook.

Did someone forward this to you? Want your own copy? Sign up here to receive The Hill’s 12:30 Report in your inbox daily: http://bit.ly/2kjMNnn

Breakdown of the numbers: https://cnn.it/2UAgW3y

Fifteen children have developed a potentially dangerous inflammatory condition that may be linked to the coronavirus.  What we know: https://wapo.st/3dnE63F

THE PLAN TO REOPEN NEW YORK:

THE TARGET OF CORONAVIRUS PROTESTS:

Via The Hill’s Reid Wilson, conservative protesters are taking aim at scientists and elites. https://bit.ly/2WtkiFn

Interesting read — what it’s like for senators to be back in Washington:

Via Politico’s Burgess Everett and Marianne Levine, “The Capitol is stirring to life after being hobbled for weeks by the coronavirus pandemic. But the halls are mostly empty, and the anxiety pulsing through the United States is reflected in the altered rhythms of Congress. Everyone is adjusting to a new normal.” https://politi.co/2YyAXKp

What it’s normally like on the Senate floor: “The Senate is a social institution by nature, a group of 100 members who spend hours each month milling around on the Senate floor during votes. Monday evenings are known as a ‘bed check’ vote when leaders in both parties can take the temperature of their members on the pressing issues of the day during a noncontroversial roll call.”

^ And now: “The coronavirus changed all that. Sure, the vote to confirm a new inspector general of the Nuclear Regulatory Commission was 87-0. But most senators voted with speed on Monday evening, casting their vote and then quickly walking off the floor without the usual back-patting and breeze-shooting.”

Sen. Mark WarnerMark Robert WarnerFive things to know as intelligence community probes coronavirus’s origins Senate Democrats introduce proposal to pay businesses up to K per worker US intelligence says it’s investigating COVID-19’s origins MORE (D-Va.) said in a statement: “While I am willing to give Mr. Ratcliffe the benefit of the doubt in the hearing, I don’t see what has changed since last summer, when the President decided not to proceed with this nomination over concerns regarding his inexperience, partisanship, and past statements that seemed to embellish his record – including some particularly damaging remarks about whistleblowers, which has long been a bipartisan cause on our committee.”

SEN. RICHARD BURR (R-N.C.) HAS RETURNED WITH A BEARD:

Burr explains why he has a beard: “Burr says, ‘Some might wonder my face might look a little hairy’ and says it is a tribute to the late Senator Tom CoburnThomas (Tom) Allen CoburnThe Hill’s Campaign Report: Trump, Biden spar over coronavirus response Senator Tom Coburn’s government oversight legacy Remembering Tom Coburn’s quiet persistence MORE, who used to grow a beard when Congress was on breaks from Washington.” (Via Reuters’ Patricia Zengerle) https://bit.ly/2L3L2a8

HOW REOPENING THE CAPITOL HAS BECOME A PARTISAN ISSUE:

IN THE SUPREME COURT

The Supreme Court is hearing oral arguments by teleconference this week amid the coronavirus outbreak.

The gist: “In 2013 The Supreme Court held that the First Amendment barred Congress from requiring US nongovernmental organizations from receiving federal funds to fight HIV, if the groups did not have a policy explicitly opposing prostitution and sex trafficking. Now, the Court will revisit whether Congress can impose the restriction on foreign affiliates of US nongovernmental organizations.” https://cnn.it/2L0U3ka

Livestream of today’s hearing — it started at 11 a.m. EDT: https://cs.pn/2Yygsxw

To better understand the case: The National Constitution Center is holding a panel discussion on the case. Livestream from C-SPAN: https://cs.pn/2L4CtvI

IN THE WHITE HOUSE

Trump’s coronavirus projections have been a bit controversial:

Via The Hill’s Niall Stanage, “President Trump is mired in controversy over projections about the total number of deaths from COVID-19.” https://bit.ly/35B1uIg

From critics: “His detractors accuse him of pulling figures out of thin air, giving the nation false hope and seeking to boost his reelection odds.”

From supporters: “Trump’s defenders, however, assert he is simply fulfilling the traditional role of a president in trying to bolster morale during a crisis.”

How this could play out: https://bit.ly/35B1uIg

An internal projection by the Trump administration is suggesting that U.S. deaths will grow to 3,000 a day by June. The full report: https://nyti.ms/2L69xDu

HOW THE NEW DEATH TOLL PROJECTIONS HIGHLIGHT THE CHALLENGES OF REOPENING:

The Senate is in. The House is out. President Trump is in Phoenix. today and Vice President Pence is in Washington, D.C.

Via The Washington Post’s Peggy McGlone, “Washington’s 14-week run of ‘Hamilton’ is the latest casualty of the coronavirus-related closures, as the Kennedy Center announced Monday that it will remain shuttered through at least Aug. 8.” https://wapo.st/3cd526o

The scheduled dates: From June 16 through Sept. 20.  “Kennedy Center executives are working with the musical’s producers to reschedule.”

And because you made it this far, here’s a kangaroo who wants belly rubs: https://bit.ly/2yyn3NN

About the Author: Geoffrey Rowland