Home Covid Clinical Studies The Lancet’s HCQ study: Why it was retracted, and the status now 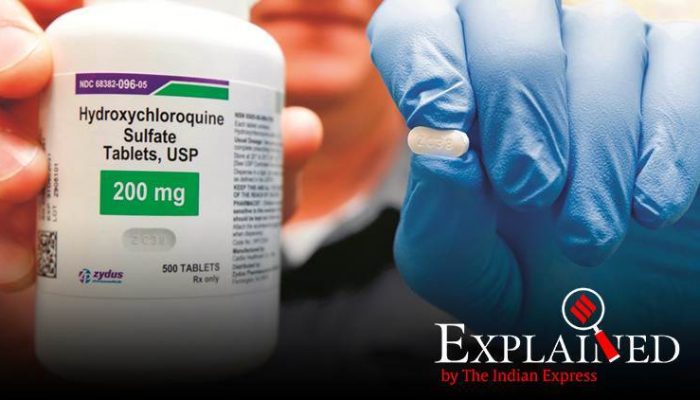 Last week, The Lancet published a retraction from three of four authors of a study that had said neither chloroquine nor hydroxychloroquine (HCQ) with antibiotics hold any significant promise as a treatment for Covid-19. The World Health Organization (WHO), which had suspended enrolment for the HCQ arm of the Solidarity Trial following the original study, has reinstated it following the retraction. Solidarity is an international clinical trial on possible Covid-19 treatments, including HCQ, which is an antimalarial drug. India has continued to repose its faith in HCQ, while US President Donald Trump claims to use it himself.

What was the study and why was it retracted?

In the study on chloroquine and HCQ with antibiotics, the authors had written: “Each of these drug regimens was associated with decreased in-hospital survival and an increased frequency of ventricular arrhythmias when used for treatment of COVID-19.”

Following the retraction by three of the authors, The Lancet wrote: “They were unable to complete an independent audit of the data underpinning their analysis. As a result, they have concluded that they ‘can no longer vouch for the veracity of the primary data sources’… There are many outstanding questions about Surgisphere and the data that were allegedly included in this study. Following guidelines from the Committee on Publication Ethics (COPE) and International Committee of Medical Journal Editors (ICMJE), institutional reviews of Surgisphere’s research collaborations are urgently needed.” Alongside the note appears an interest disclosure list that is significantly longer than the one in the original study.

It is a Chicago-based firm that collates data. Its website says, “The Surgisphere registry is an aggregation of the deidentified electronic health records of customers of QuartzClinical, Surgisphere’s machine learning program and data analytics platform. Surgisphere directly integrates with the EHRs of our hospital customers to provide them actionable data insights to improve efficiency and effectiveness.”

Surgisphere has stood by the integrity of its data even while refusing to give access to it to peer reviewers citing client confidentiality agreements. “One of the core principals at Surgisphere is based around data integrity. Another is centered on data security. Our entire ISO 9001:2015 and ISO 27001:2013 certificate and various audits that we have completed all focus on these two foundations of the company, and the data acquisition, warehousing, analytics, and reporting processes that relate to them. It is vitally important that our colleagues around the world understand the validity of our database as it relates to those functions, especially where the data comes from, the database, and the statistical analysis,” the company said in a statement following an earlier expression of concern by The Lancet on the HCQ study.

There has been another retracted study (not related to HCQ), again with data from Surgisphere. The New England Journal of Medicine has printed a retraction note for a study it published last month: “Because all the authors were not granted access to the raw data and the raw data could not be made available to a third-party auditor, we are unable to validate the primary data sources underlying our article, ‘Cardiovascular Disease, Drug Therapy, and Mortality in Covid-19’.” The two studies have three authors in common.

WEBINAR: Unlockdown, And After: What Holds For The Jobs Market As Economy Contracts
In conversation with Manish Sabharwal, Chairman & Co-Founder, TeamLease Services Ltd; Director, Central Board of @RBI

What is the message from the controversy?

The retractions have exposed gaps in the peer review process. It is usually an unpaid job for researchers who are sparing time for work that carries no credit. Checks and balances that can call out fudged data are very few.

James Heathers, a research scientist at Northeastern University in Boston wrote in The Guardian: “The immediate solution to this problem of extreme opacity, which allows flawed papers to hide in plain sight, has been advocated for years: require more transparency, mandate more scrutiny. Prioritise publishing papers which present data and analytical code alongside a manuscript. Re-analyse papers for their accuracy before publication, instead of just assessing their potential importance. Engage expert statistical reviewers where necessary, pay them if you must. Be immediately responsive to criticism, and enforce this same standard on authors. The alternative is more retractions, more missteps, more wasted time, more loss of public trust … and more death.”

The Covid-19 pandemic has given rise to a global hunger for scientific work and a rush of medical journals to get research published. The compulsive need among researchers to publish papers, or perish, is called the Darsee Syndrome, after John Darsee, a researcher who was considered extremely bright early in his career, before being accused of data fraud.

Said Dr K S Reddy, president of the Public Health Foundation of India, member of the Indian Council of Medical Research’s Covid-19 task force and member of the executive group of the international steering committee of the Solidarity Trial, “Scientific publications depend on rigorous, unbiased and knowledgeable peer reviews by experts supplemented by the journal’s editorial team. Slip-ups can occur at any stage in this process… When expedited reviews are conducted at a great rush, in the Covid-19 era, the chances of a slip-up increase. The consequences can be harmful if the errors are uncorrected. However, the beauty of science is that it can quickly self-correct… Lessons will be learnt but respect for science must go up and not diminish as a result of this controversy.”

📣 Express Explained is now on Telegram. Click here to join our channel (@ieexplained) and stay updated with the latest

What is the status of HCQ now?

While the WHO has reinstated the HCQ arm of its trial, India has never wavered from its faith in the drug as a treatment and a prophylactic for Covid-19. India weathered The Lancet study, citing its own data to justify the use of the drug.

Meanwhile, investigators in the Recovery Trial at the University of Oxford have announced that they would stop enrolment for the HCQ arm as no benefits have been found of the drug. Peter Horby, chief investigator of the trial, said: “Hydroxychloroquine and chloroquine have received a lot of attention and have been used very widely to treat COVID patients despite the absence of any good evidence. The RECOVERY trial has shown that hydroxychloroquine is not an effective treatment in patients hospitalised with COVID- 19. Although it is disappointing that this treatment has been shown to be ineffective, it does allow us to focus care and research on more promising drugs.”

📣 The Indian Express is now on Telegram. Click here to join our channel (@indianexpress) and stay updated with the latest headlines

For all the latest Explained News, download Indian Express App.

About the Author: The Indian Express