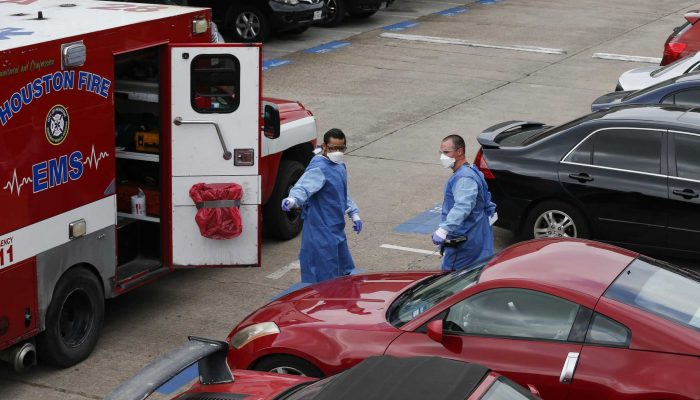 A revised model suggests Texas could have 5,000 fewer COVID-19 deaths than previously estimated.

The Institute for Health Metrics and Evaluation, a global health research organization at the University of Washington School of Medicine, is forecasting that Texas will have 957 deaths by Aug. 4, 2020. IHME models have been used by the White House.

That model had previously forecast around 6,000 deaths. Then 4,000, and now just under 1,000, said Dr. Peter Hotez, professor and dean for the National School of Tropical Medicine at the Baylor College of Medicine.

“I think the drop means that we’ve done a good job of enacting social distancing early on,” Hotez said. “Getting ahead of the curve. That turned out to be very important.”

Abbott said the number of people testing positive for the coronavirus is “leveling off” and has remained mostly under 1,000 new cases a day even as testing has accelerated. He said that on April 9, Texas had more than 1,000 people test positive for COVID-19, but hasn’t hit that number in 12 straight days.

“It’s not because COVID-19 is suddenly dispersed from the geography of the state of Texas,” Abbott said. “The reason why it is leveling off is because our fellow Texans have done such a great job of reducing their interactions with others.” Abbott also credited the improved testing capacity of the state. He agreed with public health experts who said continued vigilance is needed and said it’s not yet time to fully reopen the economy.

The IHME modeling also showed improved numbers nationally. It estimated a nationwide drop in deaths, down 12 percent to a projected 60,308 deaths across the U.S. by Aug. 4.

“We are seeing the numbers decline because some state and local governments, and, equally important, individuals around the country have stepped up to protect their families, their neighbors, and friends and coworkers by reducing physical contact,” IHME Director Christopher Murray said in a news release.

Also contributing to the lower death count is newly available cell phone data that suggests mobility, and presumably social contact, has declined in some states earlier than the organization’s modeling predicted. Murray also said the IHME forecasts are updated as the quality and quantity of data increases.

“Now, the challenge — as well as opportunity — is for states to figure out how to reopen the U.S. economy and allow people to get back to work without sacrificing that progress,” Murray said. “Relaxing social distancing too soon carries great risks of a resurgence of new infections. No one wants to see this vicious cycle repeating itself.”

IHME said it may be possible to relax social distancing in Texas after June 1. But with pressure being placed on governors and mayors to reopen their economies, Hotez doubts strict social distancing will be maintained that long. And if it isn’t, he said projected deaths could go back up again.

Hotez recognizes the realities of opening segments of the economy, but he said it needs to be done with a carefully mapped out plan. A plan that considers both health and the economy.

All predictions are subject to change, especially when looking further out. Think about the weather. Tomorrow’s forecast is more likely to be accurate than the next week’s forecast. Lauren Ancel Meyers, who heads the University of Texas COVID-19 Modeling Consortium, said UT’s projections for COVID-19 deaths account for growing uncertainty when looking further into the future.

UT’s model, launched on Friday, only looks three weeks out. It’s projecting 863 deaths in Texas by May 12, though Meyers emphasized the actual number could be hundreds of people higher or lower.

“When our models project far into the future, the outputs are not forecasts but rather plausible scenarios,” she said in an email. “The fate of ongoing COVID-19 epidemics will depend on social distancing and other efforts to mitigate the spread of the virus.”