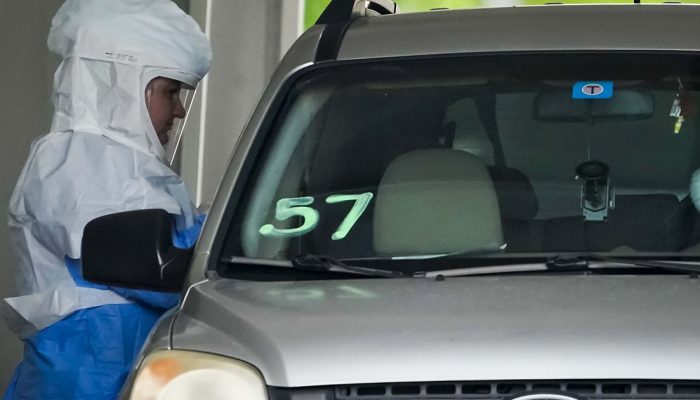 For the first time since the coronavirus outbreak began, Texas is reporting the total number of people tested by county, giving the public its first glimpse of how testing rates vary within the state.

In Dallas County, which has 2.6 million residents, at least 9,500 people have been tested for COVID-19, the data show.

In a state where testing has lagged, the new data can help pinpoint areas where testing rates are particularly low and show who among the most vulnerable residents has access to tests.

These new numbers help to provide a baseline for rates of local testing and help show how much more screening may be needed before schools, stores and offices are allowed to reopen.

“There is still a concerning lack of availability of testing,” Dr. Philip Huang, the county’s director of health and human services, said Monday. “As we move to the next stages of addressing this epidemic, additional testing will be a critical need.”

For weeks, the state’s health department has tracked the number of confirmed COVID-19 cases by county. On Friday, it also started reporting how many residents in each county have been tested for the virus. The state plans to update those counts weekly.

The testing rates vary widely across Texas. Among the state’s largest counties, Travis County had 49 tests for every 10,000 residents, while Bexar County had only 22. Dallas County fell in between, at 36 tests per 10,000 residents.

State health officials on Monday said they could not account for the wide variation. But they did note that the county-level data are incomplete: Of the 96,000 tests given statewide as of April 8, nearly 17,000 had not yet been assigned to a county. Another 1,900 tests had incomplete addresses, making it impossible to assign them to a county.

The state has been working on a county-level tally for a few weeks, said Lara Anton, a spokeswoman with the Texas Department of State Health Services. Under an executive order by Gov. Greg Abbott, labs must report both positive and negative test results. But with more than 100 labs sending results in varying formats — including some by fax — the pace of counting those numbers has remained slow, Anton said.

“Knowing the number of people tested by county helps local officials have a better picture of the situation in their area,” Anton said.

Texas joins a growing number of states, from Louisiana to Indiana, and New York to Florida, that are reporting cases by county.

In Washington state, where the first COVID-19 case in the U.S. was reported in January, health officials said tracking tests by county helps direct medical equipment and facilities where they’re most needed.

“We’re trying to make sure that on a per-capita basis, everyone’s getting the same type of access,” said Jamie Nixon, a spokesman for the Washington State Department of Health.

The Dallas Morning News recently wrote about parts of southern Dallas and other neighborhoods that could be hit the hardest with severe COVID-19 cases because a large share of residents have chronic health problems. Many of those areas have high poverty levels and predominantly black or Hispanic populations.

On Monday, Dallas County Judge Clay Jenkins said he was working with Parkland Hospital & Health System and UT Southwestern to dramatically increase the amount of testing, especially in vulnerable neighborhoods. If the county can help the two hospital systems acquire enough chemical mixtures and equipment needed for testing, they could test an additional 3,000 to 6,000 people a day, he said. Jenkins estimated the amount of public testing available in the county is about 600 tests per day.

The county publishes daily maps showing the number of confirmed cases by ZIP code — but the data does not reflect the total number of tests by ZIP code.

“The more testing the better. That’s how we’re going to fully understand the extent of the situation here in Dallas County,” said Jaime Resendez, a Dallas City Council member who represents Pleasant Grove and other parts of southeast Dallas.

Testing numbers by ZIP code would also be helpful, he said.

“It would let us know if there are any discrepancies in testing,” he said. For instance, he said, the city has two drive-through testing sites — one at the American Airlines Center, the other in southern Dallas at Ellis Davis Field House.

But you need a car to use those sites, Resendez noted. “That can obviously present an issue for folks who don’t have a vehicle or someone who can take them,” he said.

In some Dallas neighborhoods, census data show, a third or more of households don’t have a car.

Experts said that until the pace of testing ramps up, it will be hard to know just how prevalent the disease is in a community. Even then, not everyone who needs a test may end up getting one, said Catherine Troisi, an epidemiologist with the University of Texas Health Science Center at Houston.

“More vulnerable populations who don’t have health insurance, who have to be going to their jobs at the grocery store and don’t have time to get tested … they’re less likely to get tested for anything,” she said.