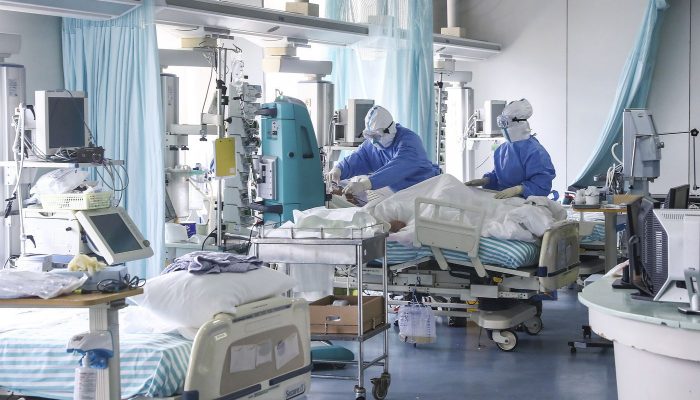 COVID-19 is caused by a virus. But what’s actually killing people is something else.

This week’s surge in demand for California’s intensive care unit beds – from 1,259 to 1,676 — is caused by an illness that resembles drowning when the lungs are too full of fluid to breathe.

It looks a lot like a familiar enemy, called Acute Respiratory Distress Syndrome, or ARDS. But it’s different, too.

Now doctors in the trenches are worried that the standard approach for treatment is failing patients. They are even debating: Does the use of ventilators help? Or hurt?

“It is alarming because we don’t have a treatment paradigm to fall back on,” he said.

The general trajectory of a COVID-19 diagnosis is becoming clear, based on months of experience in thousands of patients in China, Europe and now the U.S.

The illness seems to have two phases. Most people experience the first. But some go on to a second phase, with catastrophic consequences.

In the first week, viral levels are high. Symptoms such as fever, sore throat or cough are mild or moderate. The immune system fends off the virus in a targeted and calibrated way. People may feel lousy but recover.

But in a subset of patients, for reasons unknown, things go horribly awry during the second week of illness. Even though levels of virus fall, the immune system goes into dangerous overdrive, flooding the lungs with inflammatory cells. In these people, it’s their body’s response, rather than the virus, that’s lethal.

“This is often when people will deteriorate and become much more ill and end up in the ICU,” said infectious disease expert Dr. Annie Luetkemeyer, associate professor of medicine at UC San Francisco.

Of COVID-19 patients, 15 to 25 percent have severe disease and 5 percent end up in the ICU, according to Dr. Jennifer Babik, an infectious disease specialist at UC San Francisco.

In a comparison of very sick patients in China, shortness of breath began around the seventh day of their illness, with sepsis starting on the ninth or 10th day, followed by ARDS and then ICU admission on the 12th day, said Babik. The heart and kidneys showed injury on the 15th day. On the 17th day, secondary infections began to set in. Patients died, on average, on the 19th day.

“Honestly, it’s the worst scenario that can happen to any patient. It is a nightmare to control,” said Los Altos geriatric specialist Dr. Mehrdad Ayati.

What’s happening? Think of your respiratory system as a tree. The branches are your bronchi and at the end of each small branch are leaves — clusters of 600 million tiny microscopic sacs, called alveoli. That’s where oxygen and carbon dioxide are exchanged.

During the immune overreaction, called a “cytokine storm,” the alveoli drown in a gummy yellow fluid.

“The feeling that you can’t breathe that is one of the scariest things,” said Eileen Rubin of the ARDS Foundation, who nearly died at age 33 after the onset of non-COVID sepsis, then ARDS. Her kidneys failed, both lungs collapsed and she went into respiratory arrest, forcing her to be put in a medically-induced coma for four of nine weeks of hospitalization.

“You try to get a deep, clean breath of air, and you can’t,” she said. “You are constricted. You feel restrained. You can’t fix it. It causes this deep anxiety.”

Normally caused by pneumonia or sepsis, ARDS is a well-studied disease that affects 200,000 people a year.

Now, “almost every patient coming to the ICU because of COVID-19 meets criteria for ARDS,” said Dr. Angela Rogers, a pulmonary critical care physician at Stanford University and an expert in the syndrome.

But the features of the new viral illness don’t quite fit the classic ARDS pattern, she and a growing number of critical care physicians say. And that’s baffling.

Many patients come to the hospital with blood oxygen levels so low they should be gasping for breath but instead they’re talking and texting on their phone, said Valley Med’s Saunders. Their lungs are relatively elastic. Mysteriously, their blood levels of carbon dioxide remain relatively low.

Tragically, their disease progresses — and as in classic ARDS, the lungs become filled with protein-rich edema and fibrin debris, according to Dr. Michael Matthay, professor of medicine at UCSF who specializes in the care of patients with acute respiratory failure. But there are also unique cellular features of the COVID illness, with lymphocytes and mononuclear cells filling the lungs.

And, most worrisome: As the disease progresses, ventilators aren’t saving people. Despite our best efforts, COVID-19 illness is far more lethal than traditional ARDS, claiming not 40% of victims but 70% or even 80%.

Even as hospitals and governors raise the alarm about ventilator shortages, a growing number of doctors say the equipment may offer little benefit to many and even harm patients.

We are at a critical juncture where there are two competing and contradictory opinions about the management of #COVID19 respiratory failure. We think the ARDSnet protocol, high PEEP, is a dead-end and will cost thousands of extra lives. @cameronks https://t.co/q6l38fxxMo

They question the old dogma, instead urging consideration of simpler and less aggressive alternatives, such as breathing masks and lying in a prone position, with the chest down and back up. Ventilation, which forces air into the lungs at a set rate and force, may be essential, they note. But it should be used differently; providing oxygen, not pressure. COVID-19 more closely resembles symptoms of high altitude sickness, rather than pneumonia, they say.

If the air sacs of the lungs are so gummy that they can’t absorb oxygen, a ventilator’s high pressure could cause damage, according to an influential letter last week written by Italian and German ARDS experts in the American Journal of Respiratory and Critical Care Medicine.

Amid the fatigue and stress of trying to save patients, doctors are seeking to discover what’s going so wrong.

“The way we are treating this right now isn’t working,” said Saunders. “This is either a very virulent and much more terrible disease — or, alternatively, we are treating the wrong disease, so we need to work in a different way. I deeply worry clinicians are incorrectly treating this disease as primarily an ARDS-related process when what we’re seeing suggests it’s not.

“This is all new,” he said. “There may be something different about the disease, and we’re trying to understand what it is.”