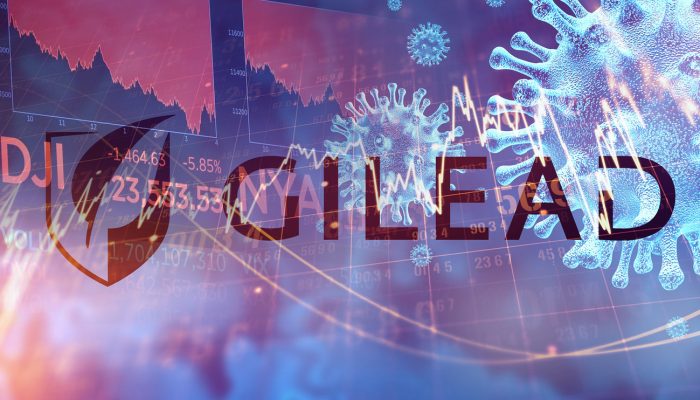 
This article is part of a series tracking the effects of the COVID-19 pandemic on major businesses, and will be updated. It was originally published April 24.

If this pandemic is going to have a savior, investors are betting that Gilead Sciences Inc. is their personal Jesus.

Gilead’s
GILD,
+2.39%
experimental antiviral remedesivir is being tested in multiple Phase 3 clinical trials as a treatment for moderately and severely ill COVID-19 patients.

Business in the age of COVID-19: Read profiles of how other large companies will be affected by the coronavirus

But it turns out that science and faith may not always line up, even in an unprecedented pandemic that is radically changing how new and old therapies are tested and regulated as hundreds of thousands of Americans are sickened by the novel coronavirus and at least 50,000 have died. There are no proven treatments or vaccines for COVID-19.

Gilead stock was up 1.9% in trading on Friday, and shares have soared 23.0% over the last three months although the ride has been bumpy. Year-to-date, Gilead’s stock is up 19.5%.

On April 16, a partial set of promising clinical trial data was leaked to Stat News, sending Gilead’s stock soaring. A week later, the World Health Organization inadvertently published less-than-promising data about the drug from a clinical trial in China, as reported by the Financial Times and Stat News. The stock then took a tumble on Thursday.

Next Thursday, when Gilead reports first-quarter earnings, investors will pay close attention to what the company says about remdesivir, to no surprise, especially given that the first company-approved batch of clinical data for the investigational therapy may be out by then. They will also have questions about the company’s HIV portfolio and its oncology ambitions.

The company has said it plans to share results in April from its open-label study of remdesivir in patients who are severely ill with COVID-19. Additional data from two other trials is expected to be shared in May.

Putting aside remdesivir, the Gilead story right now is one focused on change. The company, which shot to pharmaceutical prominence in 2013 with the Food and Drug Administration approval of the hepatitis-C cure Sovaldi, has lately turned its gaze on oncology. (That’s the thing about developing a cure; at its peak, Sovaldi brought in $10 billion in 2014, but demand fell off as fewer people were in need of treatment.)

Since the beginning of March, the drugmaker has signed two cancer-focused deals: an acquisition of immuno-oncology company Forty Seven Inc. for $4.9 billion, and a three-year research collaboration with Onko-innate in which the biotech received an undisclosed upfront payment. There have also been recent reports that Gilead is considering a stake in Arcus Biosciences Inc., another cancer therapy developer.

The company’s well-known HIV drug portfolio, which made up 74% of total sales last year, got a boost with the 2018 approval of Biktarvy, which brought in $4.7 billion in 2019, up from $1.9 billion in 2018. The drug is on track for $6.8 billion in sales this year, according to a FactSet consensus. And while some analysts have raised questions about how shelter-in-place orders will impact prescription drug sales, “for the most part growth brands are still growing (Biktarvy, Dupixent, Aimovig),” Bernstein analysts wrote on Monday.

What the numbers are saying

Earnings: Analysts surveyed by FactSet expect $1.59 a share in earnings for the quarter, up from a previous forecast of $1.58, according to the FactSet consensus. For the full year, analysts predict $6.33 earnings per share.

Revenue: Analysts expect $5.4 billion in first-quarter revenue for the first quarter of 2020. For the full year, analysts now model $22.3 billion.

Stock movement: Gilead’s stock has gained 23.0% over the last three months, compared with the S&P 500, which is down 13.4%. Of the 29 analysts tracked by FactSet who cover the company, nine rate the stock a buy, 12 rate it a hold, one rates it overweight, and one rates it sell two rate it, with an average price target of $76.21 as of April 24.

What the company is saying

April 10: Gilead CEO Daniel O’Day wrote in an open letter: “We know that there is tremendous interest around when the data from these trials will be available and what they will tell us about remdesivir. We feel the urgency as we wait for the science to speak.”

On April 23: In response to the WHO publication of the Chinese trial data, Gilead’s chief medical officer Merdad Parsey said in a statement: “The results of this trial in China, along with those of the compassionate use cohort of more critically ill patients published on April 10, add to a growing but still inconclusive body of evidence for remdesivir.”

What analysts are saying

• “We continue to view the product as having very modest economic value to Gilead, given pricing and margin expectations. Gilead’s stock becomes more attractive on the basis of fundamentals the closer it gets to $70/share, which we regard as fair value for the sum of the HIV, HCV and oncology franchises.” — SVB Leerink’s Geoffrey Porges on April 23

• “We are looking for 1.) visibility into a much more significant and durable remdesivir commercial opportunity than contemplated; 2.) M&A or other catalyst that changes top-line growth trajectory; or 3.) unwinding of remdesivir-driven appreciation, in order to get more constructive on shares.” — Mathew Luchini at BMO Capital Markets on April 19

• “There’s still a great deal we don’t know, and thus we hesitate to put too much into the results generated at a single center without a control group. That said, we’re not overly surprised by the sharp after-hours move higher given the amount of hope the market (and society at large) are putting into these types of countermeasures.” — J.P. Morgan’s Cory Kasimov on April 16